Fabio Quartararo and his unexpected rival for the MotoGP World Championship: “He seems the most constant” 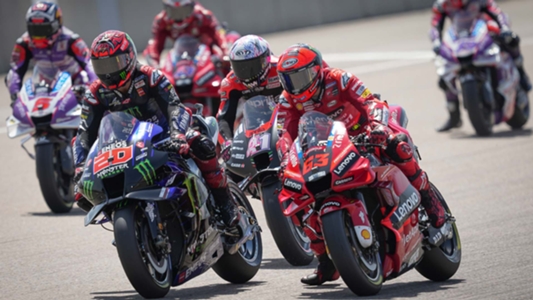 fabio quartararo He is on his way to repeating the world title of MotoGP . The French pilot yamaha 21 points ahead of its namesake aprili

Fabio Quartararo and his unexpected rival for the MotoGP World Championship: “He seems the most constant”

fabio quartararo He is on his way to repeating the world title of MotoGP . The French pilot yamaha 21 points ahead of its namesake aprilia , Aleix Espargaro once the halfway point of the season has passed.

The third in discord is precisely his compatriot Johann Zarco as Pramac already at almost 60 points, while the one who was his rival last year Pecco Bagnaia with Ducati He appears to be out of contention at almost 70 points, placing fourth with nine runs to go.

Izascun Ruiz take advantage of the new episode of ‘Carpool: road and talk’ of DAZN to ask you about this question and many more in a light-hearted way.

🗣 A luxury guest like @FabioQ20 accompanies 🎙 @izaskunruiz in this installment: his situation at Yamaha, Marc Márquez… Find out now! pic.twitter.com/Bnb9zkffV4

“Before the year began, I would say that my main rival was Pecco Bagnaia now in the last few races he has lost a lot of points but he will always be here in the second part”, assures Quartararo.

” Aleix Espargaro It seems that he is the most constant, also on the podium, he is always at the top and it is a good fight”, recognizes the native of Nice after eleven races in the MotoGP World Championship.

Quartararo, “prepared” to fight with Márquez

“I already feel prepared for fights with Marc Márquez . I want him to come back, firstly because I get on well with him and I don’t want any rider to get hurt…”, says Quartararo about the Spaniard’s injury.

Read more | When does Marc Márquez return to MotoGP?

“It’s where I’ve learned the most as a rider with Marc. The two races I’ve done in Thailand and Misano when you see ‘+0 Marc’ (on the table) for more than 20 laps and you do 25 laps with Marc stuck without making many mistakes, you really learn a lot and it’s incredible what I’ve learned with him and what I have left”, Add French.

Quartararo confesses the reason he stayed at Yamaha

During the walk with our partner, Fabio Quartararo talks about the doubts he had about his future after becoming world champion: “Feeling like the most wanted on the grid is part of the plan, I like it.”

“This year they had wanted me a little bit before staying at Yamaha, but in the end our goal was always to stay but we doubted. When you win a championship with a team and the following year they don’t improve what you want, we hesitate”, adds the French rider.

“I have gone for the best project and in the end, I have believed that Yamaha for the following years will be the best. It is difficult to see what will be the safest but I believe in this project and I am sure it will be very good. I do not need another Yamaha to be at the front to motivate me”, insists Quartararo.

Quartararo and the good vibes in MotoGP

23 years is enough to be world champion in the premier class, and if not, tell Fabio Quartararo: “In MotoGP and in general, I hang out more with people my age because it’s more difficult to have a good-natured relationship with the pilots”.

“There is not too much good vibes, because when I am on the bike, I go there to kill everyone… we have to be realistic. When the races are over there is that good vibe but I assure you that when I am with the helmet, there is no “, ends the Yamaha rider.

MotoGP: Summary of the 2022 world championship
Nakagami leads the first free practice of the MotoGP Argentine Grand Prix
MotoGP – French GP 2022: Casadei dominates from start to finish in the first round of MotoE
MOTOGP 703

Loading...
Newer Post
Golf returns to its roots at the British Open with Rahm as contender | Sports
Older Post
Three Sinaloans will seek glory in the Brazilian Grand Prix in Boxing