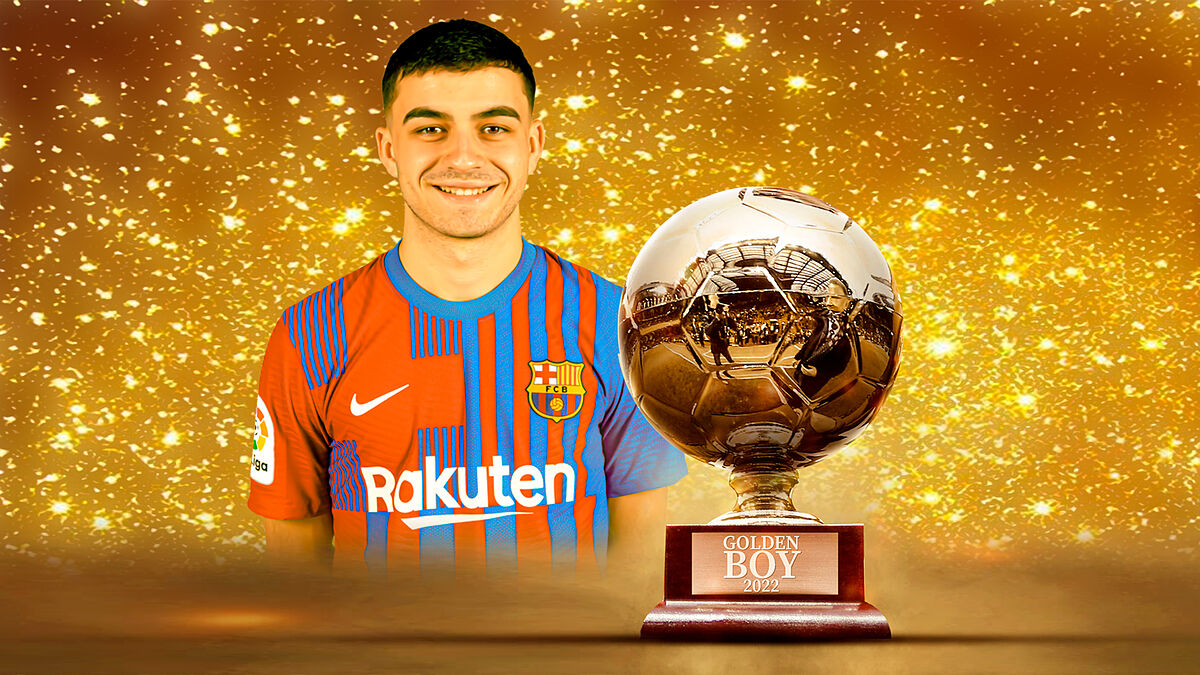 ANDmonths ago that all the polls gave as a favorite for the Golden Boy to Pedri. And this Monday all the forecasts have been fulfilled. The canar

ANDmonths ago that all the polls gave as a favorite for the Golden Boy to Pedri. And this Monday all the forecasts have been fulfilled. The canary has been chosen as the best European footballer under 21 years of age in 2021, an award that he delivers Tuttosport. Receive the award on December 13 at Turn.

Pedri take the witness of Messi, which was the last Barça player to win it, in 2015. Cesc Fbregas (2006) and Kun Agero (2007) also have the Golden Boy, but they did not succeed with the azulgrana shirt.

“It is a deserved triumph. Of the forty journalists who vote on behalf of the most illustrious newspapers of our continent, 24 place it in first place, another 9 in second place and 3 in third place”, announced the director of Tuttosport , Xavier Jacobelli.

“Thanks to Tuttosport this trophy that makes me proud. Thanks also to all the members of the jury and the fans who have always supported me in this 2021 that has been simply incredible for me. And of course, many thanks to the Bara, to the national team, to my family, to my friends and obviously to all those who have been close to me day after day without whom I would not have been able to win the Golden boy“, were the first words of the azulgrana in the Italian environment.

I am proud of this trophy; 2021 has been just amazing for me

The canary lived an intense year full of matches. It was one of the great revelations and it became untouchable for him. Barcelona. I played practically everything. His great performance as a Barça player led him to Eurocup, previously passed through the sub 21 briefly, and finally to the Olympic games. Among all the competitions, and at 18 years old, he closed the course with 73 matches in his boots.

The numbers of the Barcelona of the past season were impressive. In fact, in the regular championship only one match was lost, the last one and when there was nothing at stake. Koeman gave him rest, thinking that he could enjoy a few days off before facing the Eurocup.

The viral gesture of Pedri’s brother: “Let them pass, this is what we live on”

Precisely, in the tournament with Spain did not go unnoticed. I was a crucial player for Luis Enrique, played every minute except for the final stretch of the clash against Switzerland, and was chosen by the UEFA as best young player. Being with the absolute, Pedri was cited for Olympic games.

The canary did not miss the appointment of Tokyo, despite the fact that within the Barcelona many were opposed to the player playing so many minutes and so many games in a single season. But the azulgrana was proclaimed Olympic runner-up.

Pedri’s dreams: From being the best youngster in the Euro to the Olympic Games

For all these merits, Pedri has been chosen Golden Boy. The azulgrana has imposed on footballers like Bukayo saka, of the Arsenal, or the player of the Real Madrid Camavinga.

Since Pedri debuted with him Barcelona last season, the most authoritative voices in the world of football have surrendered to the quality of the canary. For instance, Gary Lineker. “Pedri it’s sooooo good. Absolute superstar in creation. Wonderful footballer, “he wrote after a national team meeting.

“He is a young, humble player who listens and works. He is a player with a great future”, that’s how I described him. Ronald Koeman. Luis Enrique, for his part, described him as a wonderful footballer and Nagelsmann He has also spoken of the quality of the canary on occasion.

Laporta: “Pedri is worth much more than 1,000 million”

The Barcelona the young player’s continuity was secured last month. Pedri signed the renewal until 2026 with a clause of 1,000 million euros. The Catalan club blinds one of the key players in its present and future project.

This course, on the other hand, collides head-on with the previous one. The canary is experiencing an ordeal with physical discomfort and has already missed many encounters. He started by playing against the Real Sociedad, Athletic and Bayern Munich, but on September 15 he suffered a muscle injury that kept him out for a couple of weeks. Back in Champions against him Benfica, playing 68 minutes, but was injured again and has not reappeared.

Even before the derby, many pools pointed to the option of the media returning to a call. But the canary suffered from his ailment in the quadriceps of the left thigh and could be out for another month. Therefore, it may not return until 2022.

The other trophy awarded by Tuttosport, the one for the best player over the age of 21, went to Robert Lewandowski, who already won it also in 2020. The Bayern striker helped with his many goals the team raised another Bundesliga and, furthermore, at the individual level he conquered the Golden Boot.