Fernando Alonso and the record that makes him an F1 legend: beat Michael Schumacher! 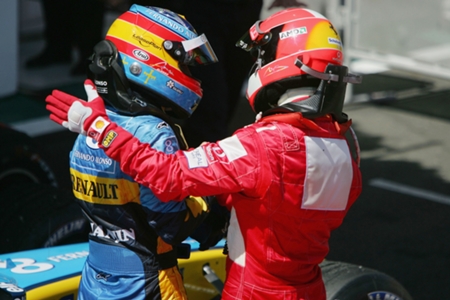 Fernando Alonso will sign again this Sunday another chapter in the history of the Formula 1, this time with Alpine. Since the first official Gran

Fernando Alonso and the record that makes him an F1 legend: beat Michael Schumacher!

Fernando Alonso will sign again this Sunday another chapter in the history of the Formula 1, this time with Alpine. Since the first official Grand Prix was held on May 13, 1950, many have been the drivers who have passed through the cars of the king of motor sport.

However, only a few have had records that will be kept over the years. One of them is Spanish, which after the Azerbaijan GP He will become the driver with the longest professional career in F1.

21 years are enough to reach the highest age of majority in the world, for example, because imagine spending all that time on top of a single-seater. Alonso has not only reached his ‘adulthood’ in Formula 1 with so many years, 3 months and 8 days, but he has surpassed another legend like Michael Schumacherwho had left his record in 21 years and 3 months.

Read more | Verstappen ‘gets wet’ over salary cap for drivers

Since his debut at the Australian Grand Prix in 2001 on March 4 of that same year with a creditable twelfth place – after starting nineteenth, Fernando has completed 334 races: a total of 7,770 days.

A ‘stand by’ in both races

Both Michael Schumacher and Fernando Alonso have taken a short break in their long careers in Formula 1.

The German announced a first withdrawal by disputing his ‘last’ Grand Prix precisely in the Rio de Janeiro country on October 26, 2006, but returning to the grid in the first round of the 2010 World Championship during the weekend of March 12 to 14 in Bahrain.

On the other hand, the Spanish driver did the same after the end of the 2018 season in Abu Dhabi (November 25) to venture into the dispute of other iconic motorsport races. He followed in the footsteps of his predecessor in 2021, interestingly enough, also on the Bahrain international circuit on March 28 of that same year, spending less time inactive in Formula 1.

The next record in sight

Fernando Alonso never tires of breaking records. The Spanish driver can beat his former teammate at Ferrari during 2014 this season Kimi raikkonen in another milestone of Formula 1.

The Finn contested 350 races in also a career of comings and goings of 20 total years. The Asturian has already 341 so if nothing strange happens he can take away this honorary title next October 2 in Singapore.

Hamilton throws tremendous tantrum at the end of the Azerbaijan GP
F1 | Qualifying in Australia: The show ends at the wall
Fernando Alonso gains a new enemy in Formula 1
FORMULA 1 1630