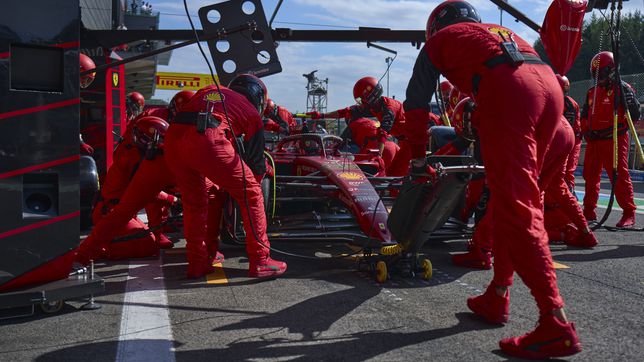 The “we can win all the remaining races” in Paul Ricard has become a “Red Bull is a faster car” after the military walk of Verstappen and Pérez in the Belgian GP. Sainz got on the podium and progresses in the World Cup, but Leclerc and the Madrid native are already third and fourth, respectively, in the standings. The title is a utopia for Ferrari and the differences are accentuated in the constructors’ table. Team boss Mattia Binotto hopes that the disadvantage will be less accentuated at Zandvoort this weekend, a track with high downforce and few straights, but the RB18 has already taught them a lesson at the Hungaroring, a track with a similar configuration. When you’re slower on all surfaces, that’s a bad sign.

“There has been a real difference between us and Red Bull in Belgium. It also happened in Hungary, which is a different high-downforce circuit. I think that right now the Red Bull is a faster car in terms of efficiency, through power unit and aerodynamics, but we also had a lot of degradation and they have been strong in that section. They are faster. The disadvantage of Spa is not the one that we will see in the rest of the races, because it is a very long circuit and it amplifies the differences. We hope to be closer in the next races, but tire degradation has been an element that has affected our performance and we must understand it and correct it”, explains the Swiss engineer of Italian origin.

It was rumored in the Spa paddock that Red Bull had debuted a lighter chassis. AS sources indicate that it is not true, although they could plan to introduce it in the next races (after passing the ‘crash test’ of the FIA). This fact worries Binotto, not only because of the performance but also because he does not understand how the energy firm is dealing with the spending ceiling. “I don’t know what they are doing, whether they have a lighter chassis or not. But the spending ceiling is a concern throughout the season, we have technical, sporting and financial rules that can make a difference depending on how they are interpreted. We need a strong FIA, otherwise the rules will not be fair. Ferrari would not be able to introduce a lighter chassis now simply because of the cost ceiling.

“If they are capable, we go back to the rules. Is it fair, equitable? Is arbitration enough? The rules are still green, the number of FIA people keeping an eye on it is still low. It must improve for the future because it would be bad for the championship to be dictated by financial and not technical rules”, says Binotto. The F1-75 will continue to evolve because all the improvements are applicable to the 2023 car: “Next year’s car will not be very different from the current one, the rules are very prescriptive and everything you learn this year is used in the next. Understanding your car’s weaknesses and resolving them is always a useful process. And even if the disadvantage was significant in Spa, I hope it will not be like that in the next races”.

Another Apparent Error in Strategy

Sainz got out of trouble and was third at Spa, the best possible result. But Leclerc lost a place at the last minute due to a penalty in the ‘pit-lane’ after Ferrari decided to fight for the fastest lap, something that he did not achieve either. Binotto defends the decision that made Charles lose two points instead of gaining one. “From the outside the perception is different, it can seem that we make mistakes when we don’t. The decision to stop him is correct. You have to be brave in Formula 1. There was room to go for the fastest lap. We knew that he would be close with Fernando, but with fresher tires the DRS could even come in handy (starting behind Alonso). Once again, I think it was the right thing to do. We exceeded the maximum speed of the ‘pit-lane’ by 0.1 kilometers per hour, it’s bad luck”. Leclerc’s Ferrari sensors were not working properly due to overheating at the start of the race, he says.

His right hand man: the money Lewis Hamilton pays the most trusted person in F1
Valtteri Bottas aims for a great weekend with Alfa Romeo in Azerbaijan
F1: Red Bull goes “fair” with the construction of the RB18
FORMULA 1 2382

Loading...
Newer Post
Belgium, new refuge for Mexicans to go to Europe
Older Post
Cavani: “I came here because football is experienced with a passion that fills and motivates us footballers”