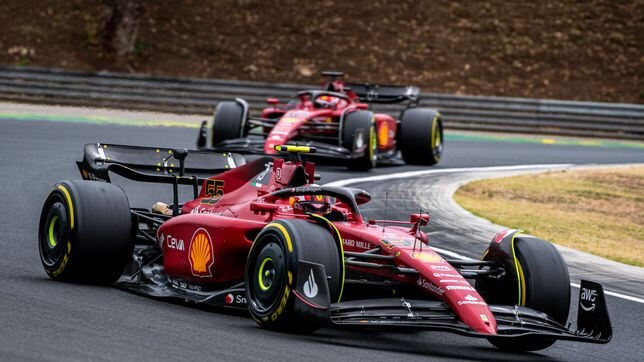 The hard tire was not working on Sunday on the cold asphalt of the Hungaroring. It was deduced by Verstappen on the way to the grid, because he ba

The hard tire was not working on Sunday on the cold asphalt of the Hungaroring. It was deduced by Verstappen on the way to the grid, because he barely had grip on the soft, and Alpine suffered mid-race with that one-stop strategy. But Ferrari did not know how to rule it out for Leclerc in the last ‘stint’ and the Monegasque sank, from the lead to sixth place. “Were they going with the hard one?” Hamilton himself was surprised before the podium ceremony. The feeling remains that Max won the Hungarian GP in front of the Mercedes as much as Ferrari lost it. Sainz started second and finished fourth, without much more pace with the Pirelli soft and with two pit-stops that exceeded four seconds and cost two positions. In fact, the only driver who overtook the man from Madrid on the track was Lewis.

Mattia Binotto, boss of the team, defends that there is no strategic error but rather a lack of performance, attributable to an incorrect ‘set-up’: “The car did not work as we expected. The speed in general was not good, with no tires. You don’t have to look at the strategy, but why the car was not as good as we expected. For the first time this season, the car is not as competitive as it normally has been. The engineer hides behind the other car: “Carlos had the same strategy as Lewis and finished behind”. But Leclerc’s message does not match: “We decided to stop and go hard, I still don’t understand the reasons, it was clearly not the right decision. I made it clear that he was comfortable with the medium so I don’t know what happened”.

The Ferrari strategy team was aware that the hard tire that Alpine fitted midway through the race did not heat up. “We see what is happening and we follow the rivals,” says Binotto. They kept the decision because, “based on the data”, “the hard one would behave the same as the medium (of Verstappen) after eleven laps”.

“It didn’t work as we expected, we don’t know why it was so bad this Sunday, but there is something wrong with the car that prevented the tires from working properly,” he ditches. The heat on Friday suited the F1-75 well, but conditions changed completely on Sunday, with wind and tarmac up to 20 degrees cooler. Fearing the ‘graining’, Maranello ruled out the soft start (Russell and Red Bull did mount it).

“It was not possible to win because we lacked speed, we still don’t know the reason, there is no clear explanation. It is the first time in thirteen grand prix that we are not competitive and we are not fighting for victory”, defends Binotto, who also encourages Leclerc after the umpteenth downturn when he was leading a race: “As the good leader he is, he will rest and come back more Hungry, he will come back wanting to take advantage of every race to win.”

And it is that there was a lot of talk about tires in the Ferrari ‘post’, at least for the public, but not so much about the umpteenth bad change of wheels with Sainz. The last three, in fact, one in France and two in Hungary, have been defective. Now, in the summer, time for analysis: they have had the best car in most circuits, they have only won four races and Verstappen is eighty points behind. Even Mercedes is already stalking second place in constructors.

the father of the McLaren F1 presents a new car with a 615 hp V12
Formula 1: Japanese Grand Prix canceled due to coronavirus
we will have night race in Las Vegas in 2023
FORMULA 1 1970