Ferrari made another disaster in F1 and social networks exploded: “Ridiculous” 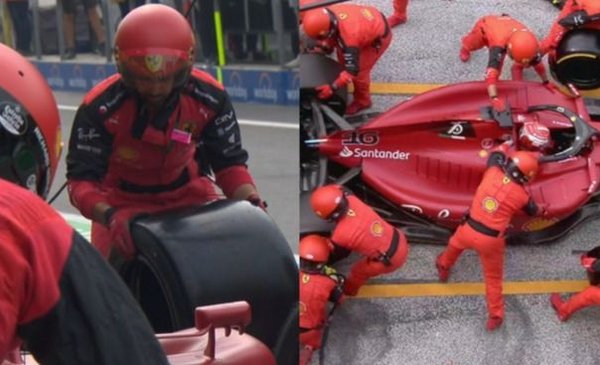 Ferrari once again made an absolute paper in the pits in Formula 1within the framework of a season that is undoubtedly chaotic. A new problem gen

Ferrari made another disaster in F1 and social networks exploded: “Ridiculous”

Ferrari once again made an absolute paper in the pits in Formula 1within the framework of a season that is undoubtedly chaotic. A new problem generated by the mechanics of the Italian team generated the anger of the fans in the social networks in full Grand Prix of the Netherlands.

The chances of Charles Leclerc and Carlos Sainz Jr. to fight for the title are increasingly remote. And also red bull escapes at the top of the Constructors Cup.

Another Ferrari disaster in F1 2022: what happened at the Dutch GP

They were 15 laps into the 15th race of the year when Sainz entered the pits, although something really unusual happened there. Almost amateurishly and inexperiencedly, the mechanics had not prepared one of the tires! While the Spaniard was ready to return to the track, the team members realized that the left rear tire was not ready.

Although they hurried up and went to look for her, this caused the Iberian to fall far behind in the race. not satisfied with it, when Sergio “Checo” Pérez passed behind with the Red Bull, he took a hose that the mechanics of “La Rossa” had forgotten lying on the floor.

Another Ferrari disaster in Formula 1 in 2022.

Another Ferrari disaster in Formula 1 in 2022.

Not satisfied with it, when they were 18 of the 72 turns it was Leclerc’s turn in the pits. However, the young Monegasque did not escape the laziness of “Il Cavalino Rampante”: the staff took too long to attend to his car and the driver went from first to fourth in the competition. If you don’t believe…

The “Tifosi” did not let these situations pass through the networks and, especially on Twitter, severely punished the staff of the squad with the most supporters globally. Mercilessly, in the application of the little bird they described what happened in the former Netherlands What “ridiculous”, “shame” and “unusual”among other things.

They also ironically protested because, according to them, “They forgot that the car has four wheels” and because “they get better day by day”. It is a piece of paper that will be difficult to forget with the passing of the seasons of the highest category of world motorsports.

The 16th competition of the season will be the Italian Grand Prix at the Monza circuit on Sunday, September 11 at 10 a.m. in Argentina.

When Formula 1 ends and how many dates are left
Formula 1. George Russell does not try to copy Hamilton
Formula 1 clarifies the rules on entering and exiting the Pit-lane
FORMULA 1 2355

Loading...
Newer Post
NBA rumors: 5 role players available on the market
Older Post
NFL prepares minute of silence in honor of Isabel II in the Kickoff of the season