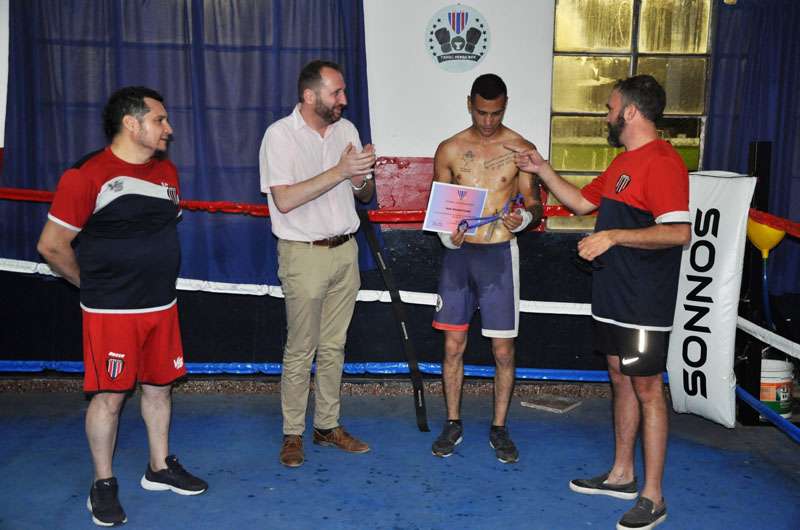 
Isaías Ferrando became the first professional boxer in the history of Club Ferrocarril Sud. The board of directors recognized him and all of Ferro Box. In addition, a festival is being planned at the club, where it would be the fighter’s debut as a professional.

After a long time of work, Ferro Box, the boxing school of the Club Ferrocarril Sud, achieved one of its most important objectives. For a few days, Isaías Ferrando became the first professional boxer in the history of the tricolor entity.

For this reason, the board of directors decided to recognize him for this merit and value the great work that has been done in the gym that operates at the Damaso Latasa Stadium.

Adrián Leiva, boxing coach at Ferro, said that “it is a job that has been done for three years. Here we also have a school, recreational boxing, all that helps us to have amateur boxers and we have been able to have a professional boxer. It is something very difficult, in Tandil there are almost no professional boxers because it is a sacrifice of several years ”.

“The priority is not only to have professionals, but to be able to train children from the school, also in education, to be able to help from the human side together with the club so that the children can get ahead, sport is an excuse”, added the director boxing technician.

For his part, Ezequiel Lester, president of the club, mentioned that “it is an enormous joy, that is why we wanted to come to recognize it from the Board of Directors and all the associates. This is the result of many issues that are previously worked on, related to their passing through the club, that they are contained, teach them values, discipline, responsibility, commitment. All that sums up in this achievement, having the first official boxer in our history ”.

“We are convinced that the boys and girls of our city have to be within the club, if boxing discipline attracts and contains them, welcome,” added Lester.

Isaías, the new boxing professional, expressed that the achievement “is a pride, I never thought that I would be the first professional boxer. As I always say, God does all this. No matter how much I sacrifice, putting God first is the key to success. “

“It is a joy more than a responsibility, you have to be responsible for training, giving 100% as we have been doing with the whole team. We did the whole race well and now we have to put him forward. Representing the club is a source of pride, I am going to take Ferro to the greatest level ”, said the boxer.

Meanwhile, the boxing activity in Ferro does not stop, and work is being done to carry out the second boxing festival of the institution. It would be held on December 11, in the sports complex that the entity has on Avenida Colón. That would be the opportunity for Ferrando’s professional debut.

Also, there would be another professional undercard fight. Other boxers from the tricolor institution would also participate, such as the champion of the Buenos Aires League, Iván Gómez, and the debut of Rodrigo “El Monito” Almirón, a 15-year-old young man who started at the Ferro Box school.

Boxer accused of murder and robbery captured
Christy Martin, boxing for her life after nearly dying at the hands of her husband
Cuba triumphs at the AIBA Men’s Boxing World Championship in Belgrade
BOXING 889

Loading...
Newer Post
The Community places golf as the axis in the strategy of reactivation of tourism after the pandemic – Cartagena Actualidad
Older Post
When nothing is going right: the NBA’s most embarrassing records