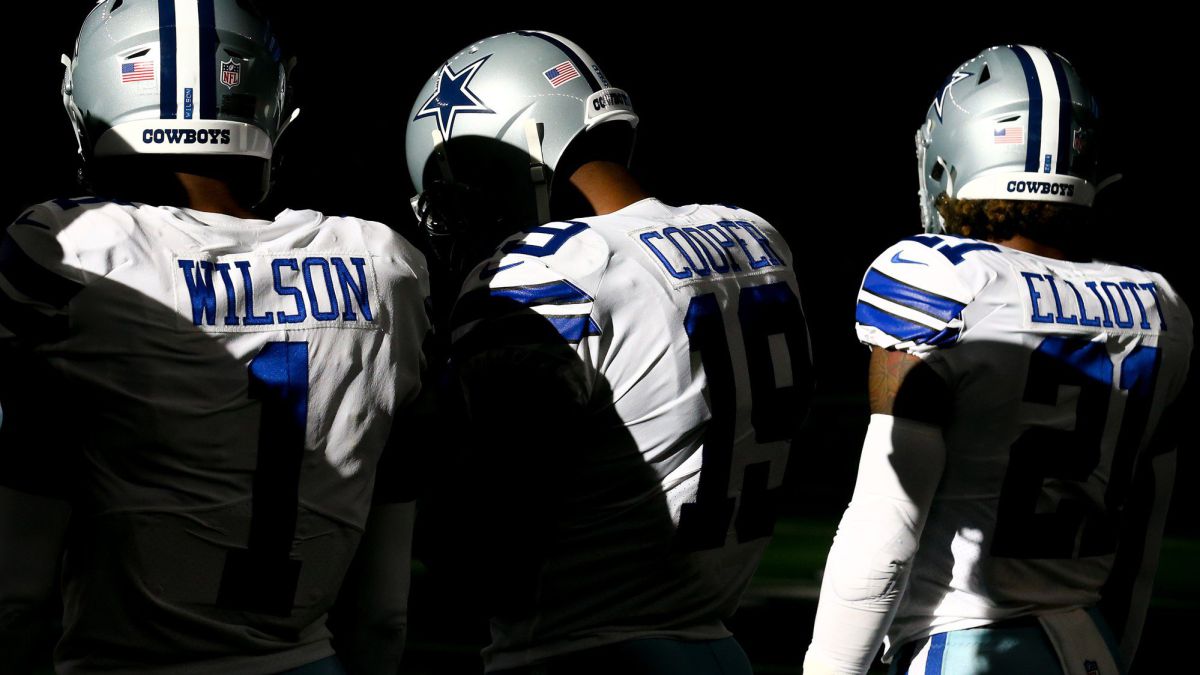 As the 2021 season begins to mature alongside the fall foliage, the numbers tell stories and set trends without the need for a torrent of words. I

As the 2021 season begins to mature alongside the fall foliage, the numbers tell stories and set trends without the need for a torrent of words. In five weeks there have been 80 matches in which 21 were decided by three points or less, a brand that equals the 2007 and 1988 campaigns with the third highest number of results defined by a difference equal to or less than a field goal.

There is often talk of the parity that exists within the league. “Anyone can beat anyone” can be read as an old common phrase turned cliche. However, its meaning is synonymous to detail the details of this year where competition is the norm. In the five-week run, 19 games were defined with a winning touchdown (field goal or touchdown), in the last minute of regulation or compensation time. Never before in the league’s history have similar numbers been recorded.

In every game, every week, no matter who is playing, anything can happen.

Within the uncertainty there is a certainty: the meetings that extend their outcome until overtime are a new custom. In each of the weeks of activity, at least one match went on overtime, eight in total this season. The NFL is tighter than traveling inside a plane with extra rows of seats!

All of these elements make the NFL so much more fun and let’s talk about it the next day.

Only the scandal starring Jon Gruden and his stupid comments that he made through emails, could overshadow a matchday in which 13 of the 16 games (81.3 percent) were within one score in the fourth quarter.

As we announced eight days ago, hometown advantages are in danger of extinction. Eight home teams have won and eight lost, but so far in 2021 the visitors tip the scales. As it happens in the picks race that I hold with @Ivan_Pirron. After a cold and shameful start like the Bills, I took my rhythm and for the second week in a row I got more hits (13), to maintain the leadership.

GAME OF THE WEEK

In the middle of the first day of rest scheduled for the American League Championship Series between the Red Sox and the Astros, on Sunday afternoon, residents of Boston and surrounding areas will shift their attention for one of the most anticipated matchups of NFL Week 6, which coincidentally involves another of the city’s iconic franchises and a Texan team.

Dallas Cowboys bring four-game winning streak to Foxborough to face the New England Patriots. Two of the winningest organizations in the Super Bowl era will line up head-to-head in a rivalry with a short past but high popularity among the fan base.

To the delight of Bill Belichick, who in recent days confessed to being one of the huge contingent of followers that Alex Cora’s Red Sox have, the game against the Boys does not coincide with the days of baseball.

For us who are fans of the armchair, we rarely care about that.

For the first time since mid-September, the Cowboys hit the road. The only loss Mike McCarthy’s team has suffered so far was on their visit to the defending Super Bowl champs, the Tampa Bay Buccaneers.

New England in its trip to Houston last Sunday achieved the second victory of the season. As if it were a space trip, they had to come out in the second half of a 22-9 black hole.

In history the Cowboys dominate the series 7-6, but the Patriots have prevailed in the last six games. Most recent in 2019 when New England took the score 13-9.

But that was so much time ago. Tom Brady no longer takes the balls below the center of the Pats and the Boys have regained their identity on offense with Ezekiel Elliott rediscovering his level. Cowboys running back eHe’s the third with the most yards in the league with 452, an average of 5.3 for each time he catches the ball. Dallas has combined its backfields for the second-best running offense in the NFL at 173 yards per game.

Although Dallas’ talent in running the ball is great, no success is achieved without offensive line, which is ranked as one of the best among the 32 teams in terms of blocks executed on rushing plays.

On his return from a serious ankle injury, Dak Prescott is adding elements to join the conversation of the MVP race. The Dallas quarterback uses everything around him. Hit passes with Amari Cooper, CeeDee Lamb, Dalton Schultz, Cedric Wilson, Blake Jarwin, Tony Pollard, and Elliott.

The Cowboys offense ranks second in the NFL in total yards (439.6).

Jerry Jones’ team has improved on both sides of the ball. Interceptions and forced fumbles continue to be created by the defense from week to week. They enter Week 6 with 10 interceptions, the most in the NFL. In the last match, Trevon Diggs had his sixth interception to lead the league. Diggs is the third player in the Super Bowl era to record at least one interception in each of his team’s first five games of a season.

Also last week, New England rookie quarterback Mac Jones led his team back with four scoring drives in the final 23 minutes, including a 15-play, 84-yard winning drive like the Patriots. recorded a 25-22 victory.

The Patriots will need more than that to cool down Dallas’ offense. Bill Belichick will lose, but the following Monday will have the reward of watching the Red Sox compete with the Astros for a World Series berth. Cowboys 30-27 Patriots

Fortunately for the Kansas City Chiefs, in his 2021 calendar he gets involved with the NFC East. Taking away from the Cowboys teams with sustainable elements to beat them, they already took over Philadelphia in Week 4. The loss they suffered at Arrowhead against the Bills, was a strong shake for Patrick Mahomes, Andy Reid but above all the defense they provide. more freedoms than an interest-free credit card.

Sweeping the East out of the NFC has ceased to be a luxury to become a reality. This is no time to hit the panic button on Kansas City still rank third in total yards and are also the fourth best team in yards per play. Faced with a strong defense like that of Washington Football Team they need to stop losing balls, so far they tie with the Jaguars as the organizations that have the most ball deliveries.

The visit to Washington is the perfect setting for Mahomes to regain confidence and Kansas City to win. Chiefs 28-21 WFT

Like the Vikings, the Panthers are coming off an uninspiring performance. Carolina is a betting favorite, perhaps because of her home advantage, which, as we already mentioned, is no longer an advantage. The difference is the actuality of the paths they took to get to this appointment. The Vikings won and the Panthers lost. In the most recent three weeks, Minnesota has improved defensively and faces the Carolina attack that with Sam Darnold begin to see its true reality after the 3-0 start. Against larger teams like the Eagles, the Panthers offensive line has collapsed accepting eight sacks, three of them from the Eagles. Not having Christian McCaffrey hurts Carolina’s game plan a lot. Vikings 24-20 Carolina

Tom Brady and the Buccaneers are heading out on the road in a short week to face the Eagles. The champions are the favorites and while Philadelphia has the talent to close the score, Tampa Bay has the depth to overcome that and more. Buccaneers 28-24 Eagles.

The NFL is once again leaving the borders of the United States to sell a product as bad as saying Baba Bowl. The only standout is that it will be Jacksonville’s first win largely because only in England are they good at winning matches. Don’t consider it a UPSET or SURE PICK, it just is what it is. Dolphins 21-23 Jaguars

In itself, living in Detroit can be considered torture to belong to the automotive rust belt. To that we must add that the team breaks more hearts than Jennifer López, what we have is a horror movie saga that will continue this week. Bengals 24-17 Lions

An older and tougher rivalry than the molcajete arrives on Sunday at noon. It will be the 203rd time they meet. The Packers have beaten the Bears 17 of the 20 most recent games, all signs leading us to Green Bay. Packers 28-24 Bears

While the Indianapolis offense still lacks explosive elements and the loss to Baltimore puts its defense in a bad light, there are few things worse than seeing the Texans and more when they go on the road. Texans 17-21 Colts

Justin Herbert has yet to win a Super Bowl to call himself the next Patrick Mahomes, but the way he plays out puts this game on the radar for fans of the new generation of quarterbacks. Los Angeles is 3-0 in the past three weeks, and much of the success is that Herbert has thrown 10 touchdown passes without interceptions and averaging 300 yards per game. Chargers 33-30 Ravens

There won’t be a big show in the Big Apple for the Giants. With their star players Daniel Jacobs and Saquan Barckley between cotton wool, everything will focus on the Hollywood lights that the Rams bring to New York. Rams 35-17 Giants

The sexiest bird of the moment flies to Cleveland in a showdown in the win could be defined in the last possession. The Cardinals and their undefeated record struggled against the 49ers but their defense rescued them. The Browns couldn’t keep up until the end against Herbert. Arizona is giving up the fifth-most rushing yards. The Browns are averaging 186 for every game. When you can’t stop the running game, the team you want to see the least is Cleveland. Cardinals 28-33 Browns

The Jon Gruden scandal undoubtedly upset the week for the players and the rest of the Raiders staff. Much distraction for an organization that is full of distractions. The Broncos aren’t the strongest team, but they don’t have a racist, homophobic, and misogynistic coach. Raiders 17-24 Broncos

Pittsburgh showed it’s still hot blooded by beating the Broncos. He snapped his losing streak and lined up on the win row, something he hasn’t done since Week 1. The Seahawks without Russell Wilson due to injury will have a lot of trouble passing the ball. They come from a long week in which they trained more, but very little time to polish everything around a new quarterback. Seahawks 21-24 Steelers

With the victory at Arrowhead over the Chiefs, the Bills changed the landscape of the AFC. Now they are considered the best team and in numbers they show it by holding the best offense by points in the NFL and the defense that allows the fewest touchdowns. They have the combo that all head coaches want to order when they arrive at the cash register. Titans improve on Derrick Henry, but the muscle car won’t be enough to slow down Buffalo’s carriages. Bills 38-28 Titans

NFL picks: These are the winners of Week 2
NFL: Maia Chaka, first African American to referee an NFL game
Panthers overwhelm Texans for 3rd win of the year
NFL 36