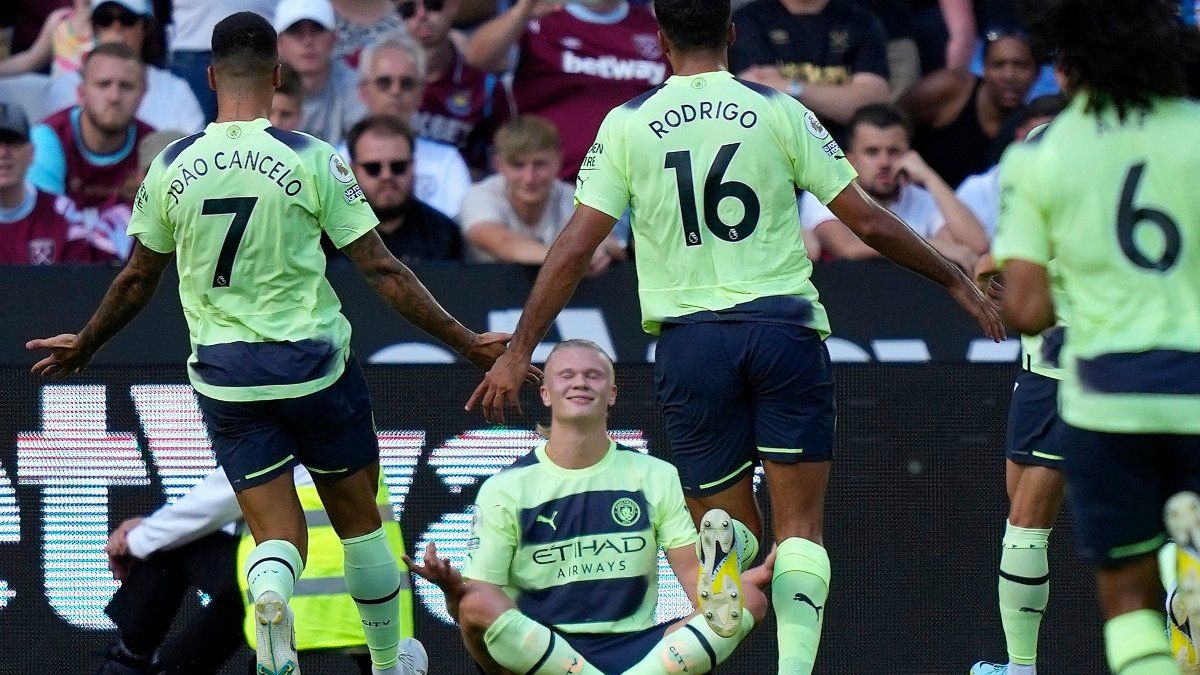 Ten Hag stood crestfallen on the sideline as he watched United's 2-1 loss to Brighton at Old Trafford. His team was overwhelmed in the first hal

Ten Hag stood crestfallen on the sideline as he watched United’s 2-1 loss to Brighton at Old Trafford. His team was overwhelmed in the first half and their attempt to come back in the second half was not enough.

Haaland scored a brace to lead Manchester City to a 2-0 win over West Ham in the Premier League. He scored from a penalty in the first half and increased it with a low shot in the second.

Ten Hag came to United to try to reduce the gap between the city rivals, after finishing 35 points behind champions City last season.

But the gap appears to be wider now — thanks in part to Haaland.

The Norwegian striker was recruited by City to have a scoring reference, after Pep Guardiola played almost the entire previous season without a fixed striker. The imposing attacker will give a new dimension to the team that scored 99 goals last season and between the Premier League, Champions League and FA Cups.

“We didn’t have a single doubt. When used to scoring goals since he was born, for sure he was going to score here”, Guardiola commented on Haaland’s debut in the Premier League.

While United fans will still have to see what impact Ten Hag will have after a disappointing performance against Brighton that showed weaknesses persist.

“Definitely a setback, really disappointing,” admitted Ten Hag. “I knew from the beginning that it would not be easy. It is a process, it takes time.

Pascal Gross scored a first-half brace as Brighton took control against a timid United side with no clear ideas until Cristiano Ronaldo came on as a substitute in the second half. The Portuguese gave the attack a boost and United came close with an own goal from Argentine midfielder Alex Mac Allister.

Players were booed by United supporters as they walked off the pitch after a performance that dispelled any notion that Ten Hag could quickly fix the problems that plagued the team the previous season.

If City had any problem to solve, Haaland seemed to be the answer.

Brentford recovered from a two-goal deficit to draw 2-2 with Leicester after substitute Josh Dasilva leveled the score in the 86th minute.

Leicester dominated most of the game and deserved to go 2-0 up after goals in each half from Timothy Castagne and Kiernan Dewsbury-Hal before Ivan Toney pulled the visitors closer in the 62nd minute.

Dasilva fired a lopsided shot to equalize with four minutes to go from the edge of the area.

Live transfer market: registrations, cancellations, renewals and reactions | Last minute today
These were the ones called by Rueda who scored a goal in foreign football | THE UNIVERSAL
Lens, Nice and Marseille seek sub-leadership in French football
FOOTBALL 3728