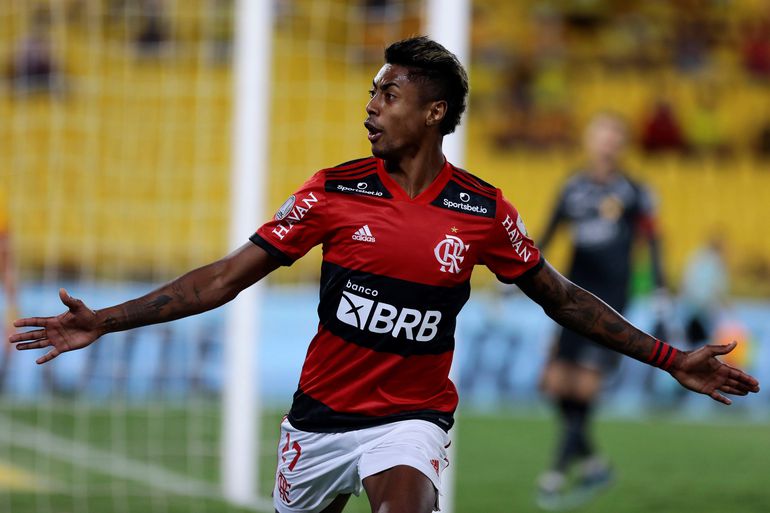 Flamengo beat Barcelona again in the second leg of the Copa Libertadores de América and will play the final match against Palmeiras on November 27 in Montevideo, Uruguay. Those from Rio de Janeiro won 2-0 in Guayaquil, the same result as the first leg, with the same goalscorer. Bruno Henrique scored both goals to bring his team to the finish.

The top scorer in the series was striker Bruno Henrique who again scored a double this Wednesday at 18 and 50 minutes of the match that was played at the Monumental stadium, owned by the ‘canaries’.

The left-handed striker repeated the dose he contributed in the first leg match for the 2-0 victory in Rio, the previous week at Maracana.

Although Barcelona ignited some scares in the vulnerable visitor defense, goalkeeper Diego Alves was key in keeping the zero in his goal.

The ‘Mengao’ confirmed his offensive power and stifled with goals any pressure to reach the final cup on November 27 in Montevideo against ‘Verdao’.

The initial disadvantage forced the Ecuadorian idol to seek to discount from the beginning of the lawsuit and for this he recharged the attacks by the right hand with the off-hooks of Byron Castillo.

The red-black ordered himself behind the line of the ball to finish off with his lethal weapon: the counterattack.

He forgave and regretted it

When the local knew to take possession of the possession and began to activate danger near the rival area, the ‘Fla’ suffered the loss of defender David Luiz due to injury, before the initial ten.

While the replacement Gustavo Henrique settled down, the bullfighters shook the visiting goal, but just like a week ago, the efficient Alves once again emerged as a figure.

The goalkeeper drowned out at least three goal calls in the first stage, before clear shots on goal from Mario Pineida, Leandro Martínez or Gonzalo Mastriani.

The Ecuadorian canary forgave and the powerful Carioca under the command of strategist Renato Gaúcho was lethal against him.

Willian Arão recovered in the middle of the court and passed to generator Everton Ribeiro, who gave a millimeter pass into the void for Bruno Henrique, who stung, eluded goalkeeper Javier Burray to finish off the visitor’s 1-0 at 18 minutes.

The score was then lapidary for the Ecuadorians, forcing them to score four goals to overcome the series in their favor.

Wounded, the local came out angry for the tie and had it at the feet of Mario Pineida and the Argentine Enmanuel Martínez, but Alves stopped everything.

The red-black began to defend himself with what he knows best, the control and circulation of the ball and when he got up, he put goalkeeper Burray in trouble.

For the second half, the local helmsman Fabián Bustos, joined the talented Damián Díaz to have more gestation before the verticality and vertigo that he evidenced in the first half.

But Flamengo confirmed his potential and class. She elaborated a play that registered 13 previous stops until reuniting the two partners of the initial goal, Ribeiro and Bruno Henrique, who was ready to push her to the front of the goal for the 2-0 at 50 of play.

With an eternity to dispute, the Ecuadorian idol searched unsuccessfully for the honor.

The Ecuadorian champion completed an outstanding campaign in which he surpassed linajudos such as former champions Boca Juniors, Santos, Vélez and then Fluminense, who fell into the Guayaquil fort.

The ‘rubronegro’ confirmed his undefeated condition in 12 presentations in this edition of the Cup, with 32 goals in favor and only 12 against.

Flamengo will go to Montevideo, where on November 27 he will seek his third continental crown (held in 1981 and 2019) against Palmeiras.

Football fantasy Sorare closes a round of 680 million led by Softbank
Manchester City 2 – PSG 1: summary, goals and results of the Champions League
Gonzalo Jara and his return to Chilean football: “I am not coming to steal”
FOOTBALL 741