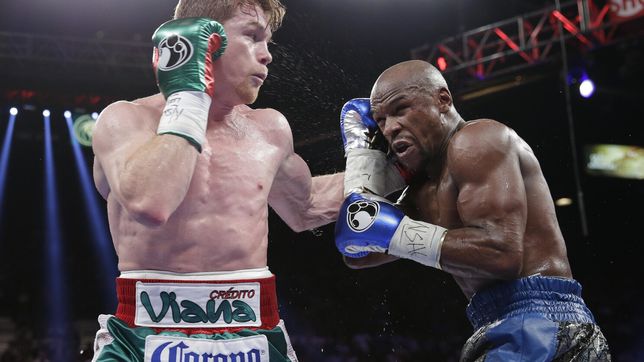 Floyd Mayweather Jr., a former welterweight champion, has been one of the most vocal characters against Saúl Canelo Álvarez, but now, in an unusual

Floyd Mayweather Jr., a former welterweight champion, has been one of the most vocal characters against Saúl Canelo Álvarez, but now, in an unusual way, he has defended him from the statements of another boxer.

Recently, Ryan García has made statements in which he questions the value of the championships obtained by Canelo Álvarez. Because of this, Mayweather put the young boxer in his place by telling him that before criticizing the unified super welterweight champion, he must win the same belts as him.

“We see Ryan Garcia. He first praises Canelo, he wants to learn from Canelo and is in training camp with him. Now, he is pure hate. Accomplish what Canelo has achieved and then you can talk bad about him,” Mayweather Jr. told FightHype.com.

Álvarez explained at the time that Ryan García’s statements were made after his separation from Eddy Reynoso and the ‘Canelo Team’. He ‘king’ trained with the Jalisco team between October 2018 and February 2022.

YOU MAY BE INTERESTED: Tommy Fury provides an alternative

‘Money’ is not jealous

On multiple occasions Mayweather has been pointed out as a character jealous of the achievements of other boxers, however, the former boxer clarified the situation and explained that he wants the new fighters to stand out.

“I will always say good things to people. I am not someone who hates. Everybody says that I’m jealous and all that, but it’s not like that. If it was, it wouldn’t help other fighters get better,” Mayweather explained.

Boxing: Mayweather launches for the signing of a galactic boxer
La Laguna will shine with quality boxing in ‘Duel of the Titans’
From being a national motocross champion to a boxer in his own promotion
BOXING 3611

Loading...
Newer Post
F1 sprint race: what it is, how it works, points and qualifying format
Older Post
Raiders: Sandra Douglass Morgan, first African-American woman to be president in the NFL | Sports NFL