Fontanar and MMA continue to demonstrate a special idyll | NewAlcarria 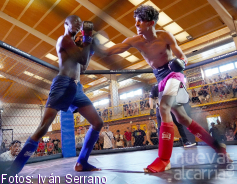 The event organized by AEMMA and GAMMA, had a large audience that enjoyed two days full of pure MMA, in which combats of a very high

The event organized by AEMMA and GAMMA, had a large audience that enjoyed two days full of pure MMA, in which combats of a very high level were experienced.

“It has been two intense days of hard work and above all a lot of satisfaction,” says the promoter and organizer of the evening, Chinto Mordillo, who at the same time highlights being “very happy with the level of participation, with several of the best clubs in Spain. and Portugal in Fontanar”.

Mordillo also refers to the quality he saw in the Fontanar pavilion and as an example of this is that several of the best clubs in Madrid were left out of the finals.

“This sport is growing a lot in Spain and we are already approaching the level of the best in the world. And Guadalajara and Fontanar are very much to blame for that”.

The evening did not miss the performance of the athletes from the lower categories of the Meguro Castilla club, from Guadalajara, who performed at a high level and also the performance of the females such as Miriam Santana, Chintya Mordillo, Zejna krantic and Alexia Hernandez who form the best Spanish women’s team, with the great Karla Benítez always as a reference.

In Fontanar, the spectators were also able to enjoy the music of Los Puntonet, with the best of 80s pop and rock.

Chinto Mordillo’s work does not stop and he is already preparing a new edition of Sangre and Arena and the 114th edition of Hombres de Honor, in Oviedo.