“Football and music are similar experiences” 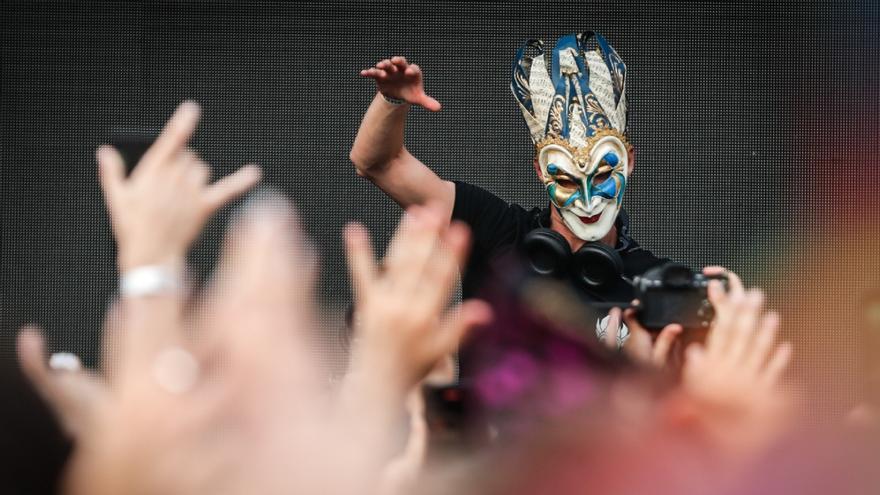 “Football and music are similar experiences”


“On stage I sometimes feel like a footballer scoring a goal. It’s a great thing!”

“A goal in a stadium can be compared to a special song. It’s like the moment that everyone has been waiting for and you are completely beside yourself”

Boris Brechchathe master of minimal, of melodic techno, the boss of the mask, the flutist of bits, returned to Barcelona last Friday, June 17. She did it hand in hand with ‘Off Sonar’, the mecca of electronic music in Barcelona. In the Spanish Town. An outrage that was ‘sold out’ before tickets were on sale. He is the king, the fucking master.

Allow me a topic: is the DJ born or made?

Both (laughs). Because first you have to be born. It’s a joke! But yes, both. Some already come into the world with the ability, others can learn it later. But I think in general everyone can easily learn to DJ. Maybe to be particularly good at it, or even to produce music, you just need a bit of a sense of rhythm and somehow some kind of musical creativity. Of course there are things that help you learn that, but it’s something that has to be there.

What was the first day you stood before hundreds or thousands of people and thought “this is serious”?

Good question. I often notice in everyday situations that some people seem to know me. But of course you never perceive yourself as a “celebrity” or anything like that. One moment that stuck in my mind was at ‘Awakenings Festival 2018’. I got to the stage about 10 or 15 minutes before my performance and saw that everything was empty. I was already set up to play just for myself, but by the time I went upstairs a second time to start, the tent had suddenly filled up. It was impressive. That’s when it really hit me: Wow, these people have come to see me. It was something very special.

For me the most beautiful thing is to see that people have fun with my music. And then I automatically dance and have a lot of fun too.

What do you feel when you make so many people dance? Who do you think enjoys more, the people or you?

I think one thing has to do with the other. For me the most beautiful thing is to see that people have fun with my music. And then I automatically dance and have a lot of fun too. And people are happy to listen to me and my music and have fun. There cannot be one thing without the other.

Have you played in clubs, music festivals and even in large stadiums. What you like more?

It is very difficult to answer. There is no answer for that. The shows in big stadiums and my big concerts are always something special, because I know that people are there just for me. Outdoor festivals in the summer always have a great atmosphere and of course are good for getting to know new fans and showing your music to people who don’t know you yet. But I also like smaller clubs or places. There you have that intimacy and closeness with your people. That is also special. I think variety makes everything special!

Barcelona. Offsonar. Are people different in different countries and cities?

A little. The more I travel to a city or country, the more I get to know its culture and I can also assess its “preferences”. People like different songs, dance differently, or dress differently. I think that is especially noticeable at parties. But of course, each session is unique each time.

I especially admire when football players do such cheeky tricks. That is definitely inimitable.

He wore the Argentina shirt in Buenos Aires and the Barça shirt in Barcelona three years ago. I understand that he likes Leo Messi… is football an art?

Yes, I think football can be art, but it doesn’t have to be. Whenever someone is very good at something in particular, it is a kind of art. I especially admire when football players do such cheeky tricks. That is definitely inimitable.

Does football make you disconnect from music or do you not need it?

Well, I really like watching football and I’m a fan of Eintracht Frankfurt. My girlfriend has always been a fan of this team. I like to go to the stadium, watch it on television whenever I can and I used to play football myself. But for me, of course, music is much more important. I collect the t-shirts from all the countries or cities and from my big fans and I also receive some with my name on them. That’s why I like to use them at concerts. 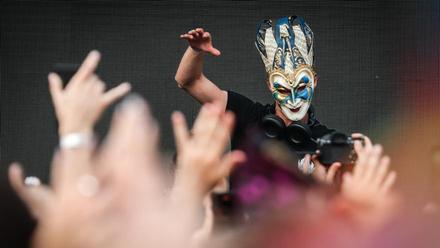 Boris Brejcha during one of his performances in Barcelona

Do you think football fans have similar experiences in one of your sessions?

Yes I think so. Football, especially in the stadium, has an enthusiastic atmosphere. Everyone is totally engrossed in the game and briefly forgets everything else. There are some emotions that are really related. I think it’s similar with music. A goal in a stadium can be compared to a special song. It’s like the moment everyone has been waiting for and you’re completely beside yourself.

Did you see the tie between Barça and Eintracht?

I saw her, of course. I’m not a fan, but my girlfriend is from Frankfurt. And I became Eintracht. It is normal. When Barça wins it’s something normal, but when Eintracht does it, it’s not. And they won at the Camp Nou. Also, I really like soccer. I played years ago, it wasn’t good, but I liked it a lot.

Any footballer is happy when he has been able to create that special moment that is to score a goal. That’s how I feel on stage sometimes.

Celebrating a goal is like getting high with one of his songs.

I think the same. For both players and fans. Any footballer is happy when he has been able to create that special moment. That’s how I feel on stage sometimes. When I realize that I can make my fans happy with a certain song or my performance, that’s a really great thing for me!

Lastly, do you have a routine with your mask or do you improvise?

There is no routine. I take it out of the suitcase, play with it and repackage it haha. No, well, of course there are certain hand movements and things that I always do in a certain song or something, just because I’ve gotten used to it. I always have the mask under the table.

I am very happy to be back in Barcelona. It has been a very difficult time for all of us, but we have survived and we are back. And this is cool.

He has returned to Barcelona after three years. The pandemic left us without several of her sessions.

I am very happy to be here again. It has been a very difficult time for all of us, but we have survived and we are back. And this is cool. I really want to get in front of people, play my songs again (I only play songs that I have produced myself) and enjoy people reacting, seeing how they dance and the massive connection I have with them. I love to see that there are people who wear my mask, who have done ‘tattoos’ with it. It’s crazy.

Will he come out like three years ago with the Barça shirt?

I don’t have it, we left Germany a while ago and I don’t have it with me. I haven’t thought about it, but next time I’ll be back.

You are always welcome in Barcelona.

Loading...
Newer Post
here you have all the fights of the Ibai boxing party, Mr Jagger and Bustamante
Older Post
The pick in the Sacramento Kings NBA Draft 2022: Keegan Murray