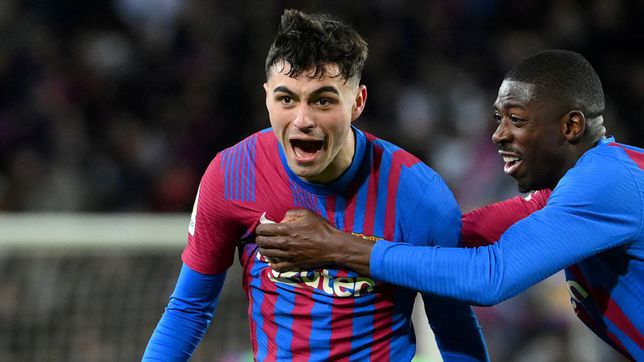 Pedro González López, Pedri, burst into the forefront of Spanish football with force, participating in up to 73 games during the 2020-21 season, th

Pedro González López, Pedri, burst into the forefront of Spanish football with force, participating in up to 73 games during the 2020-21 season, that of his debut in the Barcelona first team. He received the call from Luis Enrique to represent Spain in the European Championship. He also did it in the Olympics. He closed the course by winning his first Copa del Rey and the Golden Boy award. His body, however, said enough and last season he was only able to play 12 league games. “I love to play, but resting is fine,” he explained in an interview for the English newspaper The Guardian. “It was crazy, and it seemed like every game he went into extra time. Whenever he passed by he thought it couldn’t be true. It all happened very quickly, but at the end of the season he was very tired”.

“I don’t think there is a Canarian model, not exactly. But there are similarities between players and ideas, it is the concept of playing like on the street or on the beach. The weather influences and wherever you go in the Canary Islands you take the ball. It is something that can be seen, it is people who dribble, who have the ball, who enjoy it. It is not slowness, it is pause so that the routine is unexpected”.

“Football players are in a privileged position and people listen to us, and for a Canary the ocean is very important. What would we do without him? It is our future, our life, and we have to take care of it and make people aware of the need to use less plastic. If we don’t do it, who will?

“Recently I think that more footballers who run a lot are coming out, more than technical players who understand the game. Football is becoming more robotic but there are still some who break the rules. I play to enjoy. I always do it, and that’s the best thing a footballer can do. If you enjoy yourself you will play much better”.

Barcelona, ​​the best place to develop your game.

“I would try to play my game wherever I was, but it is true that anywhere else I would suffer more. Some clubs are satisfied with winning, no matter what. Barcelona wants to win, but playing with the ball, creating chances… I like this football better”.

“Xavi has a very clear idea, a model, and he explains to us very well what each one has to do: midfielders must be between the lines, that the ball moves from one side to the other. He tries to instill in us the things that he did as a player, which was spectacular. The interiors have to hold the position. If you are out of place and you lose the ball, then you can’t press as you need to. You will not arrive. He also wants us interiors to turn around and face the goal”.

About Iniesta and Busquets.

“Iniesta always seemed to be a good person. And she had the calm to play it simple, to make things easier than they are. The way she could leave someone behind by changing gears always fascinated me.

“Busquets has to endure, attract the rival, leave someone in a one on one. We know that he can face five or six rivals and walk away from them. Attract opponents and start alone. You have to have confidence in yourself to do it. You don’t have time to think, but you trust your ability, and it shows when you don’t. You have to be brave too, and physically strong to take those risks. Is not easy. But it is a different bravery. When the match is worse, in midfield you have to have confidence to ask for the ball and keep it”.

“My brother Fernando lives with me. When I come home, even though I’ve played a great game, he reminds me of the mistakes I’ve made. It’s a bit annoying, but he suits me, he tries to help me improve. He was a good player. Very calm, a defensive midfielder without much effort. When we went to Bajamar to play. Anywhere: on the beach, in the yard, on the street, anywhere there was space. There were bollards for the cars, and that was our goals, or two jerseys”.

“My father was a goalkeeper. When we played children against parents he was the goalkeeper, although the next day he couldn’t move. He was good, they went all out, but they didn’t beat us.”