Football is not in the feet, but in the head 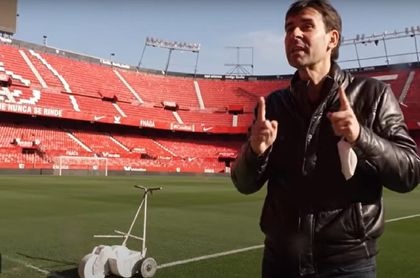 "One of the best lefties I've ever seen," Monchi said a few days ago. The one in the photo was his companion in that Seville that suffered so muc

“One of the best lefties I’ve ever seen,” Monchi said a few days ago. The one in the photo was his companion in that Seville that suffered so much at the end of the 90s. Perhaps he would say that for the new generations, those who have gotten used to seeing this club win and do not remember that time, but also for those who long for footballers like Vassilis Tsartas, a player who marked an era in the Nervionense club.

The Greek ‘magician’ visited Seville last weekend and was present at the epic match against Atlético de Madrid. Although he has followed his team throughout these years, he would not stop admiring how the club has changed. If he lived the worst five years in memory, with two relegations and three seasons in the Second Division, now he has found a club that is usual in Champions and who is even involved in the fight for LaLiga.

“Unfortunately, here I had a very bad time compared to the one the club has been running for twenty years. I also know how difficult it was to leave my mark and my mark here; and it is a pride that people still remember me and what they enjoyed with my football, “Tsartas tells the club’s media, where he remembers that there were those who blamed him for running very little. He is clear on that.”Football is not in the feet, but in the head. If you are prepared before receiving to know what you are going to do, you win. There is no player faster than the ball. I had colleagues with whom I understood very well, and that is the most important thing in a team, to coincide with the rest of the squad, &#8220;he said.

In this sense, he recalled his connection with the great promise, then, of Seville: Carlos Domínguez. &#8220;I had to know the characteristics of each player. Carlitos was fast, he had to put the ball into space and not into his feet so as not to complicate his life. For Loren, the same, he had mobility and I had the pass. The pass is well, thanks to the mobility of your partner, not the other way around. Without movement, there is no pass, &#8220;he stressed.

And he remembered the defense that Marcos Alonso made against those who doubted his defensive involvement. &#8220;An attacker has to decide in tenths&#8220;Admits Tsartas, who is remembered not only for his game but for his effectiveness from set pieces.&#8221; I spent half an hour two days a week practicing fouls and then being so good at hitting them, &#8220;he explained.

Loading...
Newer Post
Kambosos, Haney and a mess to be solved in spring
Older Post
In focus! Cory Sandhagen and a strong message for the UFC