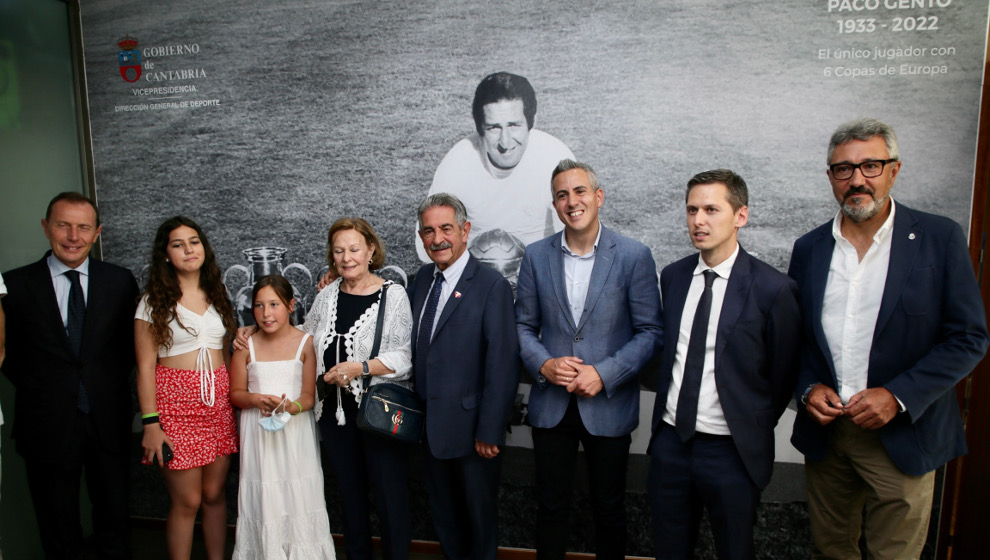 The Sports House of Cantabriain Santander, shines from this Friday the name of Paco Gentoin tribute to the Cantabrian legend of world football, th

The Sports House of Cantabriain Santander, shines from this Friday the name of Paco Gentoin tribute to the Cantabrian legend of world football, the only player in history who has managed to win six European Cups.

the regional president, Miguel Angel Revillaand the vice president, Paul Zuloagahave presided over this morning the recognition that the Autonomous Community has given to Gento, known as ‘La Galerna del Cantábrico’ for his contribution from sport to the promotion of the image of Cantabria.

The act was attended by relatives of Gento, the director of Institutional Relations of Real Madrid, Emilio Butragueno; his counterpart in Racing, Victor Diego, a team in which the Guarnizo footballer also played in the 52-53 season; the General Director of Sports, Mario Iglesiasand the mayor of El Astillero, Javier Fernandez Soberon. Also present were the former soccer player and former national coach, Vincent Miera; representatives of the sports federations of Cantabria and the Madrid supporters clubs, and a group of young players from the Racing Foundation.

In his speech, Revilla expressed the pride of Cantabria for having given the history of football the “best player in the world”, “an outstanding”. However, beyond his football qualities, he has highlighted his attachment to Cantabria and his human values: “There is no other like him. But the important thing about Paco Gento, and that he should be a reference for those guys in the back is that he was a simple guy, an example as a person and as a player“, he pointed out.

Taking advantage of Butragueño’s presence, the president highlighted the extensive list of Cantabrian players who have played in the ranks of Real Madrid and ironically commented on the possibility of erect a monument at the Bernabéu in memory of “the Cantabrians who made Real Madrid great”, among whom has been cited Gento, Miera, Santillana, ‘Pachín’, Marquitos or Amavisca.

For his part, Zuloaga pointed out that this tribute to Paco Gento is a “an act of justice for Cantabria, for sport, for his family, for Racing, for Real Madrid and for everything that La Galerna del Cantábrico meant for his generation and for the new generations” of footballers. As he said, “his milestone and his history” will serve as a reference to the sport of Cantabria, represented in the building that now bears his name through the different sports federations that have their headquarters in it.

Tags: the cantabrian newspaper, pacoento, eldiariocantabria
Messi would have asked a young promise of Argentine football for PSG
Agenda for dates 2, 3 and 4
Iberdrola sends all its energy to the Spanish Women’s Soccer Team in…
FOOTBALL 3176