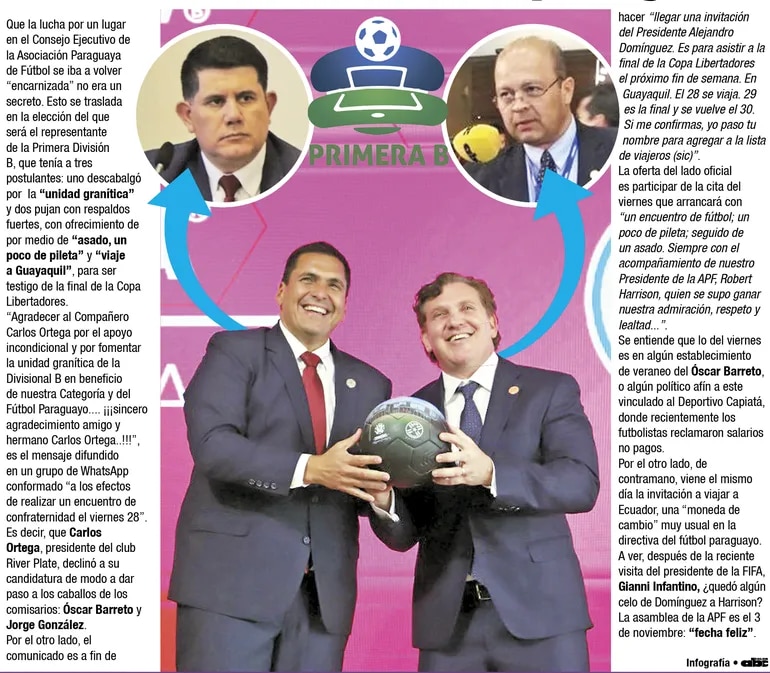 That the fight for a place on the Executive Council of the Paraguayan Football Association was going to become "fierce" was no secret. This is tra

That the fight for a place on the Executive Council of the Paraguayan Football Association was going to become “fierce” was no secret. This is transferred in the election of the one who will be the representative of the First Division B, which had three applicants: one dismounted for the “granite unit” and two bid with strong support, with an offer of “asado, a little bit of swimming pool” and “trip to Guayaquil”, to witness the final of the Copa Libertadores.

“Thank Comrade Carlos Ortega for the unconditional support and for promoting the granite unity of Division B for the benefit of our Category and Paraguayan Soccer…. sincere thanks, friend and brother Carlos Ortega…!!!”, It is the message spread in a WhatsApp group formed “for the purpose of holding a fellowship meeting on Friday the 28th”.

That is to say that Carlos Ortega, president of the River Plate club, declined his candidacy in order to make way for the commissioners’ horses: Óscar Barreto and Jorge González.

On the other hand, the statement is in order to “get an invitation from President Alejandro Domínguez. It is to attend the Copa Libertadores final next weekend. In Guayaquil. On the 28th you travel. 29 is the final and it becomes 30. If you confirm me, I will pass your name to add to the list of travelers (sic)”.

The offer from the official side is to participate in the event on Friday that will start with “a soccer match; a little pool; followed by a roast. Always with the accompaniment of our President of the APF, Robert Harrison, who knew how to win our admiration, respect and loyalty…”.

Read more: Miguel Almirón, in the ideal XI of the Premier together with Haaland and Casemiro

It is understood that what happened on Friday is in some summer establishment of Óscar Barreto, or some politician related to him linked to Deportivo Capiatá, where the soccer players recently claimed unpaid wages.

On the other hand, the same day comes the invitation to travel to Ecuador, a very common “exchange currency” in the Paraguayan soccer board.

Let’s see, after the recent visit of the FIFA president, Gianni Infantino, is there any jealousy of Domínguez to Harrison?

The APF assembly is on November 3: “happy date”.