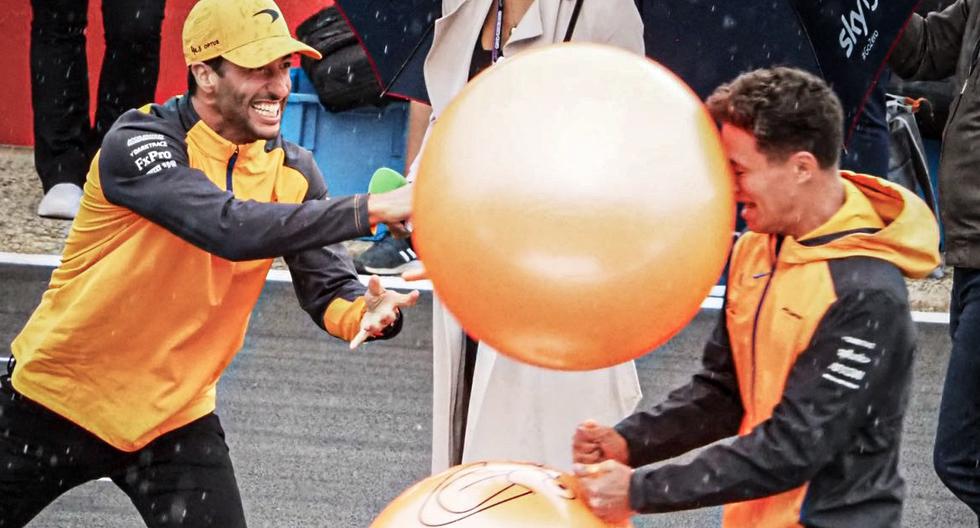 The Formula 1 British Grand Prix takes place this week and fans are enjoying pre-race activities. Precisely, last Thursday a public event was held with the participation of all the drivers, but the main protagonists were Daniel Ricciardo and Lando Norris.

During the appointment at the Silverstone Circuit, the McLaren drivers, who have not been characterized by having a close friendly relationship, made a race on bouncy balls. The scene was very funny among those present, although it had an abrupt ending, to everyone’s surprise.

Ricciardo, sitting on the ball, was ready to cross the finish line and take the victory, but Lando Norris decided to anticipate it: he took the ball in his hands and started running. The British pilot was getting ready to win the unique competition, until he was stopped with a strong impact.

Daniel, known for making jokes, took the ball and, without calculating the direction, hit his McLaren teammate in the face. The affected driver was very sore, while the Australian apologized for the reckless act he had committed. Despite everything, the scene was funny.

After what happened, Ricciardo assured on social networks that his racing partner was fine, although Lewis Hamilton, Mercedes driver, was incredulous. For his part, Lando Norris did not suffer from major complications from the blow and joked about what happened.

Daniel Ricciardo and Lando Norris referred to the accident they starred in.

When is the British GP?

The British GP, for the tenth date of the Formula 1 calendar, will be held this Sunday, July 3 at the Silverstone Circuit, from 9:00 am (Peruvian time). Free practices took place on Friday and classification will take place on Saturday, starting at 9:00 pm (Peruvian time).