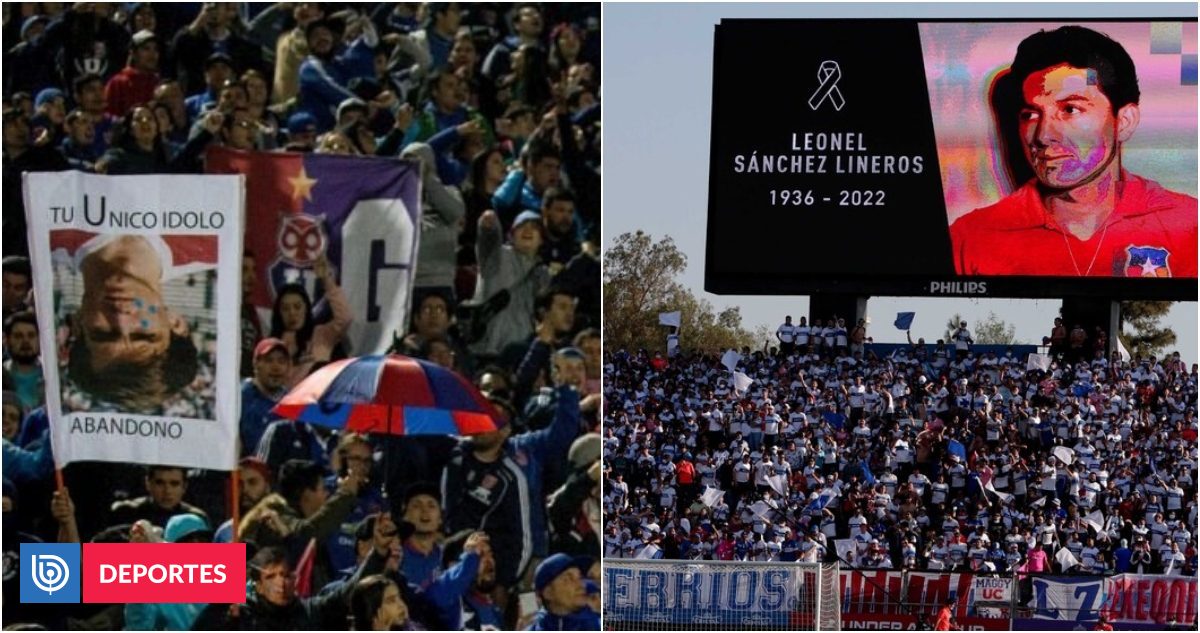 The disrespectful chant of a group of fans of the Catholic University during the minute of silence held for the death of Leonel Sánchez, has generated intense debate in the world of football and has opened the history book of national football, the one where other cruel and unacceptable teasing that should not have occurred throughout its existence.

Undoubtedly, both the fans and the supporters of the different clubs throughout the country are an essential part of the party that Chilean soccer experiences, week after week. However, in their vehement fanaticism, they become the main actors in the cruel and dark chapters that have been written in national football.

“A minute of silence…”

Just like what happened last week (April 2) in the university classic between ‘UC’ and ‘U’, where in the middle of the minute of silence for the sensitive death of the ‘blue’ idol and La Roja, Leonel Sancheza group of barristas from the ‘crusader’ cast took advantage of the emotional tribute to interrupt him and mock him.

And it is that while the players and those present in San Carlos de Apoquindo were in silence honoring one of the best players of the ‘Ballet Azul’, a handful of fans sang: “A minute of silence, for the chuncho that is dead”; unleashing the anger of other fans who repudiated the fact.

It should be noted that it was an isolated case within the Las Condes venue, since a large part of the spectators (except for said boisterous minority) respected the tribute and even applauded and stood up in honor of Leonel.

“Your only idol abandoned”

The disrespectful attitude of the Catholic University bar set fire to and divided social networks, between users who condemned the fact without double readings and those who quickly recalled a similar situation suffered by the foothills entity after the death of one of the legends of the club; Raymond Tupperprecisely with a handful of fans from Universidad de Chile.

Both the ‘crusader’ institution and the relatives of ‘Mumo’, who decided to take his own life during a tour of the ‘UC’ in Costa Rica (July 20, 1995)have suffered harassment from a sector of ‘Los de Abajo’ with canvases and songs alluding to the death of the striker from Santiago.

Most of the “Fringe” fans began to circulate images that show the disrespect suffered, at some point, by the legacy of the idol of San Carlos de Apoquindo.

I don’t share what the bar did… But here a while ago the bar of the u disrespected Raimundo Tupper, here I leave the “respect” of those who today ask for codes and feel like victims pic.twitter.com/lfVT15VmGM

A kind of ‘bullying’ towards the figure of Tupper where, on several occasions, the footballer’s suicide was confronted with the fans of the Catholic University as an act of cowardice and abandonment towards the club itself. “Your only idol abandoned”can be read in two of the images shared on Twitter, where you can also see a drawing of “Mumo” with tears in his eyes.

Canvases, flags and banners that join an outrageous chant that goes further, where he is compared to “Superman” for having launched from the ninth floor of the hotel where the ‘UC’ staff was staying on that tour. A ‘song’ created by the ‘U’ bar at the end of the 90’s and that, on rare occasions, has been heard again in the university classics.

“They brought the floats”

On February 9, 2013, there was a well-remembered tragedy that mourned all of Chilean football, when a group of fans of O’Higgins suffered the collapse (on the Caracol de Tomé slope) of their bus that was taking them to Dichato. after witnessing a meeting in front of Huachipato, causing the death of 16 ‘celestial’ fans.

A sad event that united the national clubs and an entire country with their sorrow, especially the Libertador Bernardo O’Higgins Region and the Biobío Region, where different tributes and memorials have been made to commemorate this fateful event.

However, part of the fans of Curicó Unido – called ‘The Marginals’– Little and nothing mattered to him the pain that the accident caused both to the relatives of the victims and to the internal of the Rancagüino club. And it is that, just five months after the tragedy (on July 20, 2013), during the match that pitted the ‘torteros’ against the ‘Capo de Provincia’ at the La Granja Stadium, that faction of the local fanatic showed some banners where the crude phrase could be read “they brought the floats”.

And as if that were not enough, the wild ‘mockery’ was not just that, since throughout the 90 minutes, they also made songs related to the death of the 16 fans. “Let them all die”could be heard that day in the curicano enclosure, an ugly tune that did not support the public present.

The shameful event was repudiated by both the president of O’Higgins and Curicó Unido, in addition to the majority of the squad on their social networks, remaining one of the most inhumane chapters in the Chilean soccer book.

“Orozco pays you with peanuts”

The racism, xenophobia, homophobia and machismo that prevail in the songs of the national football fans have been the target of criticism by a society that, as the years go by, it does not tolerate these acts of discrimination in the most popular sport in the country. A profound rejection has been generated after the nicknames used by fans of different clubs to revile the rival, loaded with these four unacceptable components in the contemporary world.

Many times, neither the organizations in charge of soccer in Chile nor the State have taken measures against the protagonists of these ridicules full of discrimination and hatred, which became so ‘popular’ in the 90’s.

Specifically in the case of racism, it was only in 2004 that the Disciplinary Court contemplated punishments for those who commit acts of racial discrimination on the national courts and stadiums.

Sanctions that premiered Rodrigo ‘Polaco’ Goldbergwho in 2005 -during the meeting between Santiago Morning and Provincial Osorno- said “black starving” in the Colombian’s face Manuel Valenciabeing punished with three suspension dates after the referee Claudio Aranda’s report.

An exemplary measure that was adopted just one year after the first great antecedent of racism that was handled in Chilean sports, which has to do with the arrival in the ‘U’ of the icon of the Colombian National Team; Faustino Asprilla.

The remembered and outrageous event happened in 2003, in a ‘Superclásico’ between Colo Colo and Universidad de Chile. And it is that in the first game against the archrival of the ‘Romantic Traveler’ who played ‘Tino’, the ‘White Claw’ dedicated a song that made racism debut in the national courts.

“Black conch…, Orozco pays you with peanuts”could be heard during the game, completely clouding the party that means a confrontation between ‘whites’ and ‘blues’. 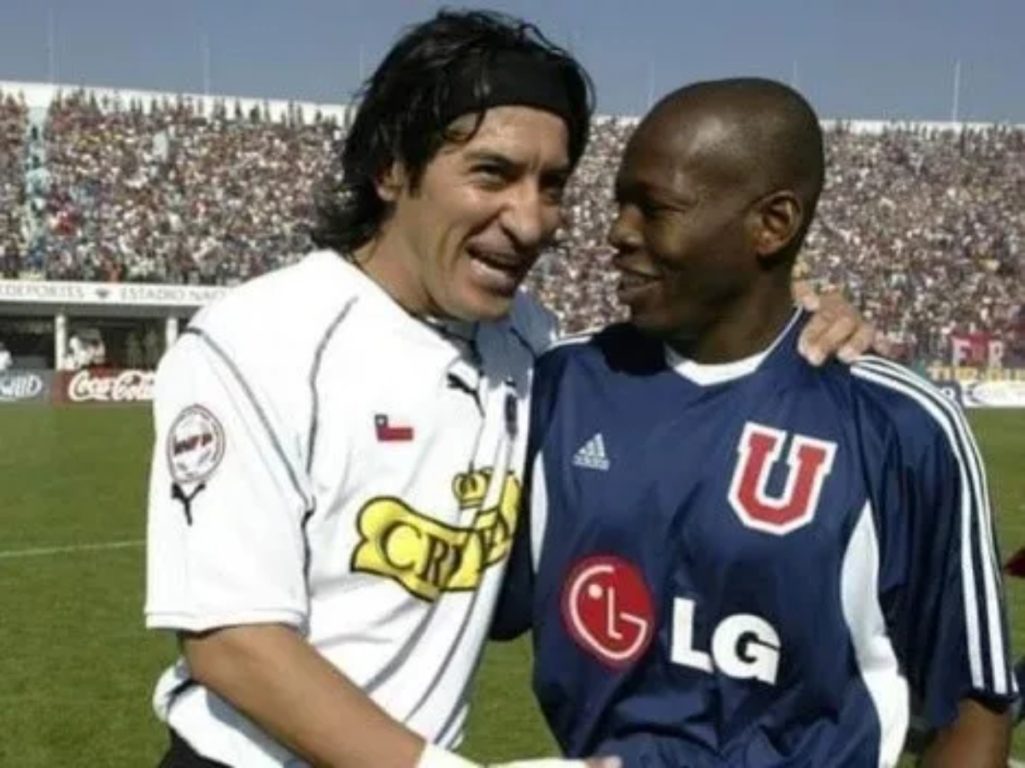 Faced with Asprilla’s indifference to the chants, the match could proceed normally without inconvenience, but it set a precedent for one of the most unacceptable and retrograde events in Chilean sport, a racist attitude that has been sought, by all means, eradicate in all stages of the world.