Francesco Bagnaia signs the second pole of the season 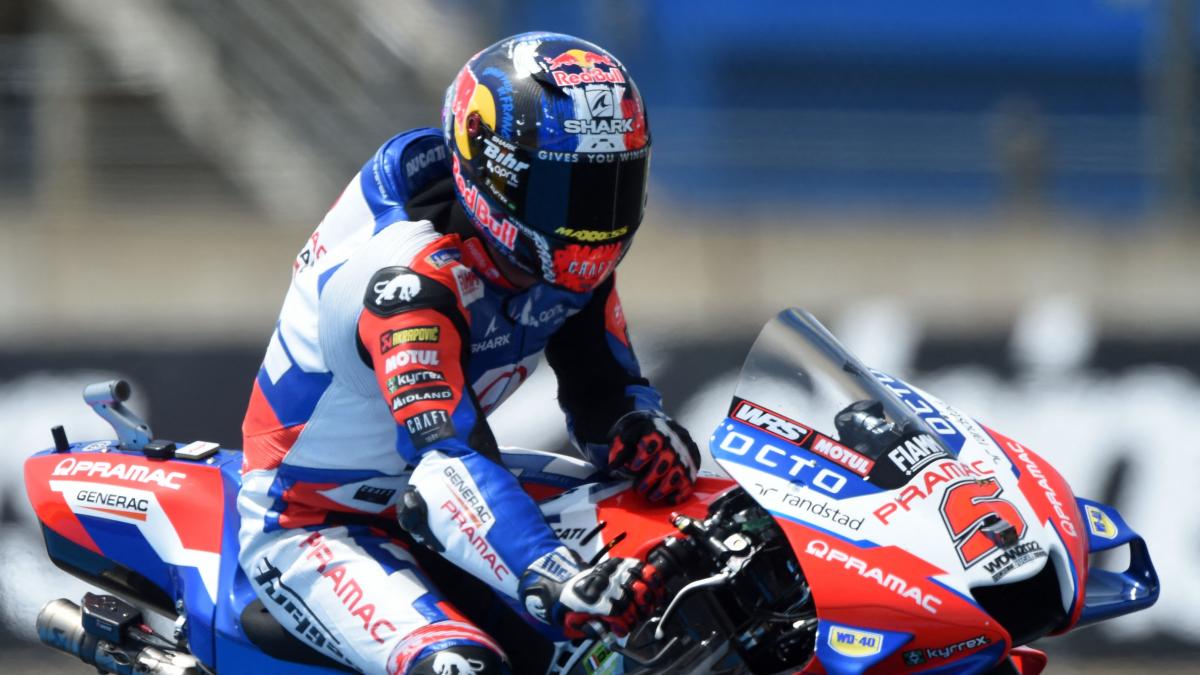 The Italian Francesco ‘Pecco’ Bagnaia and the Australian Jack Miller, on Desmosedici GP22 paths, gave the “double” to the manufacturer Ducati in the official classification for the French MotoGP GP at the Le Mans circuit.

The speed of the Ducati left no doubt about the superiority in this aspect of the prototypes of the manufacturer from Borgo Panigale, which ended up taking the first two positions and who came closest to them was the Spanish Aleix Espargaró at the handlebars of the Aprilia RS-GP , who was 159 thousandths of a second behind, with the world leader, Frenchman Fabio Quartararo (Yamaha YZR M 1), in fourth place, second row, along with Italian Enea Bastianini (Ducati Desmosedici GP21) and Frenchman Johann Zarco (Ducati Desmosedici GP22).

of the season (1’30.450 – circuit record), the eighth in MotoGP and the fifteenth in his sporting career.

Jorge Martín, with the Pramac Racing Ducati, managed to win the fastest time in the first qualifying round of the French MotoGP GP, 1’30.804 (record time). Joan Mir, from Team Suzuki Ecstar, signs the second place, +0.129 from Jorge Martín. Both will participate in Q2.

Spaniard Marc Márquez (Repsol Honda RC 213 V) regained confidence in his chances by setting the fourth fastest time thanks largely to the invaluable help he received at the end of the third free practice session of the French MotoGP GP. Fabio Quartararo (Yamaha YZRM 1).

Up to twelve riders lapped below the previous record of the track, which since 2018 had the Frenchman Johann Zarco with 1:31.185 and, of them, up to six lapped below those 31 seconds, again with Zarco as the great protagonist when establishing the new Le Mans record in 1’30.537.

Bastianini lapped in 1:31.148 to establish a new absolute record for the circuit that beat the previous mark by 37 thousandths of a second, established in 2018 by the “local” Johann Zarco at the handlebars of the Yamaha YZR M1, with which he rode in 1′ 31,185.

Marc Márquez (Repsol Honda RC 213 V) was not so lucky, who had to settle for a discreet fifteenth position, while his teammate in the energetic team, Pol Espargaró, was one of the few who could not lower his personal best in the morning.

His partner Pol Espargaró will also seek to return to at least a ‘Top 10’ in which he has only been in Lusail (Qatar, third) and Portimao (ninth).

The Bugatti circuit is located 5 kilometers south of the city of Le Mans and 200 kilometers southwest of Paris. Built in 1965, around the existing track of the 24 Hours of Le Mans, this circuit of mythical resonances has been the scene of Grand Prix since the end of the sixties. The serious accident suffered by the driver Alberto Puig in 1995 caused Le Mans to disappear from the World Championship calendar until the 2000 season, while various improvements were made to the safety of the track.

Its narrow track is characterized by sharp curves that force a driving that emphasizes the rush of braking and sudden acceleration. With a capacity to comfortably accommodate more than 100,000 spectators, the circuit is also the scene of various endurance events of all the specialties of the motor world, as well as various events of the French championships.

The timed session of the MotoGP category for the Spanish Grand Prix at the Bugatti racetrack in Le Mans, the seventh round of the motorcycling world calendar, can be followed from DAZN and Movistar +. Also, minute by minute, through the La Vanguardia website.
For this reason, the current champion will try to shine against his countrymen and give the first serious blow in a championship that will complete its first third in the French GP.

The qualifying session for the French Grand Prix in the MotoGP category, which is being held at the Bugatti racetrack in Le Mans, will take place at 2:10 p.m. (Spanish peninsular time).

“Suzuki Motor Corporation is in talks with Dorna about the possibility of ending its participation in MotoGP at the end of 2022,” recognized the official Suzuki team, days after rumors of his imminent departure.An appointment that seems unpredictable, with the possibility that the rain, accompanied by electrical storms, hangs over the plans of the drivers and teams. The French MotoGP GP qualifying session will take place at 2:10 p.m. (GMT+2); the race, for its part, will be held this Sunday, May 1 at 2:00 p.m.

Fernando Alonso vs Esteban Ocon: Would they compete in MotoGP?
schedule and where to watch on TV and ‘online’ the classification of the Portuguese Grand Prix
The MotoGP impacted with more than 3500 million pesos in the region
MOTOGP 538