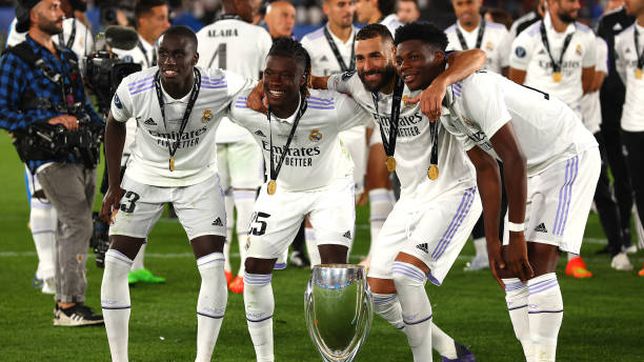 Beyond the hard-fought victory of Ancelotti's team on the first day of the league against Almería, a very significant event took place in this matc

Beyond the hard-fought victory of Ancelotti’s team on the first day of the league against Almería, a very significant event took place in this match: for the first time in history, four international players with France started in a Madrid match . These players were Aurelién Tchouaméni (22 years old), Eduardo Camavinga (19 years old), Ferland Mendy (27 years old) and Karim Benzema (34 years old). Curiously, it was not the day of any of them. The first three were substituted and Karim did not see the door. But Ancelotti trusts them and that is why they were all part of the starting eleven.

Of the four players mentioned, two of them are young promises with a more than interesting future. Tchouaméni (new signing for this season from Monaco) and Camavinga (joined last summer from Rennes) have spectacular conditions to have a great race in Madrid. They have already been full internationals with the French national team (Tchouaméni on 12 occasions and Camavinga on three) and aspire to be the natural successors of Casemiro, Kroos and Modric. However, they still need to be given time to show their full potential.

On the other hand, Mendy and Benzema are already more contrasted players and they know the white house better. Especially Karim, Madrid’s second all-time top scorer with 324 goals, only behind Cristiano. He has 97 caps and 37 goals for France. A man of legend. On the other hand, Mendy arrived in the 2019-2020 season and until now he has been the owner of the left back (despite the fact that this summer he was on the starting ramp). Having played for the French team seven times, he is perhaps the Frenchman who arrived with the fewest names of the four. In any case, if all of them come out as starters in the league it is because they have the level.

This season is the second in all of history in which Madrid has four French players in the squad. The first was in the 2019-2020 academic year, in which Areola, Mendy, Varane and Benzema were. However, in no game of that campaign did the four players coincide, among other things because Areola was the substitute goalkeeper for Courtois and only played nine games. Hard to match like that. However, there have already been French players who have been successful in the history of Europe’s most successful club. Zidane, who has undoubtedly been the one who has left the most mark, Makélélé or Raymond Kopa have been other footballers from the neighboring country who have triumphed at the Bernabéu. It is true that French football is currently one of the most powerful, but it must also be taken into account that the players from that country have always had a special predilection for Real Madrid.

Elche – Celta | Result, summary and goals of LaLiga Santander
Alexia Putellas, Beyond Gold
Soccer: They will auction the shirt that Maradona wore when he scored the “Hand of God” goal, it is estimated to be worth $5.2 million
FOOTBALL 3693

Loading...
Newer Post
Sporting will only sell tickets for one stand for the match against Andorra
Older Post
Duki 2022 tickets: prices and how to buy them