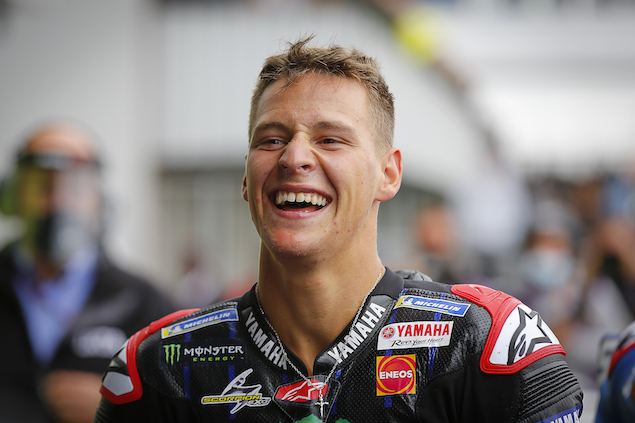 The Yamaha rider became the first Frenchman to be crowned in the premier class, bringing the fretboard brand back to the top seven years

The Yamaha rider became the first Frenchman to be crowned in the premier class, bringing the fretboard brand back to the top seven years after Jorge Lorenzo’s reign in 2015.

Quartararo dominated the Grand Prix in Doha, Portugal, Italy, the Netherlands and the UK to score 278 points.

In addition, he was second in San Marino and the United States, with third places in Styria, France and Germany to remain distant from the young Italian Pecco Bagnaia (Ducati), second with 252, and the 2020 champion, the Spanish Joan Mir (Suzuki) , third with 208.

Perhaps no more could be demanded of Quartararo this season, as he knew how to overcome all the problems that left him without the title last year, to be a faster driver in the first part of the championship, and more intelligent and conservative in the closing period, almost without making mistakes.

In a world championship in which the best bike was the Ducati, Quartararo always gave the feeling that we are facing a great champion, he won the title for Yamaha with some ease and five victories that could have been six without the misfortune of Jerez.

Regarding the possibilities of his closest followers, it is very likely that Pecco would have reached the title, but his poor decisions in the selection of tires reduced his chances, although he already showed conditions for 2022.

As for the king of 2020, the Spanish Joan Mir repeated the same performance that led him to be champion, but had less regularity than the two leaders, that is why his ranking did not rise from the third, despite having a good year, with six podiums and a less powerful bike.

Special mention for Marc Márquez, who on his return does not look like he was before and it is very possible that he will never be, but even so the fourteen races of 2021 were very good, by showing that he can win again and, incidentally, that Honda remains competitive.

More than his triumphs at Sachsenring and Austin, he was impressed by how he replicated Bagnaia at MotorLand and Misano, with the award in the latter following the Italian’s tire error.

The only thing to change is his attitude to avoid the high probability of injuries, since there have been four winters in a row without preseason.

For his part, the current Moto2 champion, the young Italian Enea Bastianini had a debut with asterisks in the premier class if we take into account that he raced with an outdated motorcycle and in one of the worst teams.

However, thanks to his regularity, he fought Jorge Martín for the “Rookie of the Year” award until the last minute.

The two podiums at Misano are the cap to a season in which Bastianini’s progress was seen race by race. Now he has to go to the Gresini Racing team for not being sponsored by Valentino Rossi, but the support of Ducati will surely help him advance on the grid if he maintains his progression in 2022.

The other rookie driver who will surely progress next year is the Spanish Martin, for demonstrating his character and speed to conquer the world, not for pleasure he was the rookie of the year for his four poles, equal number of podiums and a victory.

The battle between teams and manufacturers this time smiled at Ducati, as it was unattainable on the straights, and to top it all, it was also fast at the entrance to the corners, with what many consider the most complete bike.

VALENTINO AND HIS DREAM NUMBERS

In sport as in life, those who do not feed on their dreams grow old quickly, which is why the nine-time world champion, Italian Valentino Rossi, extended his marks 25 years after his debut in the Grand Prix.

The legendary genius of Tavullia said goodbye with dream statistics behind him, being the only rider in history to win titles in the 125cc, 250cc, 500cc and MotoGP categories; in addition to being, together with Giacomo Agostini, the only ones with titles in the premier category with both two- and four-stroke motorcycles.

Rossi has the longest-running winning race in the premier class of the World Championship, with his latest success at the 2017 Assen TT, 16 years and 351 days after his first 500cc victory at Donington in 2000.

He also has the longest track record in terms of victories in all categories: 20 years and 311 days between his first triumph in the 125cc class at Brno in 1997 and his last at Assen in 2017 (second in this regard is held by Loris Capirossi : 17 years and 49 days).

Throughout his career, Rossi competed on 38 different Grand Prix circuits and scored at least one World Cup victory on 29 of them. No other driver in history has won in as many spaces as him.

For the countless unforgettable memories that she gave to all fans of motorcycling, and for which she will undoubtedly continue to write outside of her for years to come, Grazie, OK!