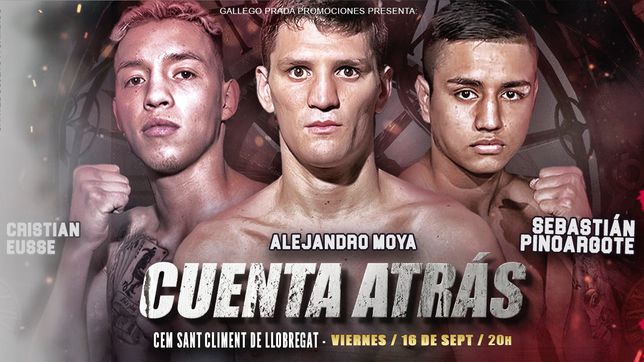 The boys from Gallego Prada are still on a roll. The benchmark boxing gym in Barcelona yesterday organized the 'Countdown' evening in Sant Climent

The boys from Gallego Prada are still on a roll. The benchmark boxing gym in Barcelona yesterday organized the ‘Countdown’ evening in Sant Climent de Llobregat, where three of its star boxers fought: Alejandro Moya, Cristian Eusse and Sebastián Pinoargote. It also featured an amateur boxing part.

The event was very well received by the public, which filled the Municipal Sports Center of Sant Climent de Llobregat. The amateur part started with an exhibition match, and was followed by 7 very competitive matches. We highlight the matches starring José Rachón, runner-up of Spain, Manel Pérez and Juan Caballero, who were the most acclaimed by the attendees.

Alejandro Moya performed the stellar combat of the afternoon. He defeated Nicaraguan Ramiro Blanco by majority decision (78-75, 79-74, 76-76) in a very intense clash agreed to over 8 rounds. The fight started strong from the beginning, and exchanges of blows and head and body combinations reigned. Blanco put up a fight, threw very good hands and in the first rounds he was imposing, but with the wear and tear of the fight the intensity decreased. In the sixth round, he was saved by the bell from falling to the canvas. They took the match to close range and despite both fighters trying to finish the fight before the bell rang, they were unsuccessful. “It was a very comfortable fight, although from the outside it seemed like it was going to be a lot of shock. He didn’t notice his hands either, so he was waiting to be able to put a counter and catch him, ”says Alejandro Moya.

After almost a year of inactivity, Alejandro Moya returned to the ring in July and defeated Nestor Maradiaga by unanimous decision. This fight has served as preparation for his next confrontation, the European Union Championship, where he will face Walid Ouizza, champion of France at the end of November. “I feel perfect, I had two fights in a row, which is what a boxer needs” explains Moya. 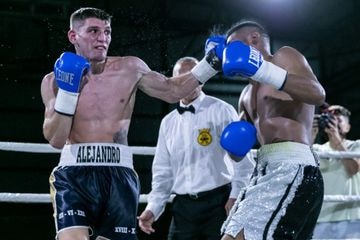 Another of the stellar fights of the night was the one between Cristian Eusse and the Nicaraguan Néstor Maradiaga. The young promise of Gallego Prada won by KO in the third round in a spectacular fight agreed to for 6 rounds. Eusse came out with a good jab and hitting good hands. In the second round, Maradiaga took a left hook that dropped him to the canvas. After several good combinations of punches, in the third round, he was back on the ground. Finally, in the next round, Cristian Eusse cornered Maradiaga against the ropes and with a right hook and left hook sent him back to the canvas, this time without him being able to get up again. “I’ve looked pretty good, I feel strong. I have been working as my team has told me”, explains Eusse, “They have told me to look on one side to be able to find what has come out, and with that work the KO has come out”.

Cristian Eusse debuted on November 14, 2021 as a professional boxer, and since then he has remained undefeated with 6 wins, 5 of them by KO. Gallego Prada’s promise wants to fight for the Spanish Super Featherweight Championship, which is currently held by Salvi Jiménez, before the end of the year. “I see myself prepared, very prepared. If everything goes as it has to go, let’s hope that the Spanish Championship is about to fall, if not, maybe better things can come”, declares Cristian Eusse. 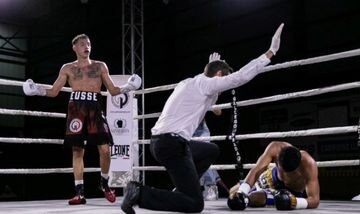 Sebastián Pinoargote, Spanish amateur champion in 2021 and runner-up in 2022, won his second victory as a professional boxer last night after defeating Venezuelan Anderson Rangel. Gallego Prada’s boxer set the pace of the fight and was much superior throughout the match. He stayed very strong and threw some very good body shots, which got Rangel tagged. Finally, Sebastián Pinoargote got the victory (40-35, 40-36, 40-35) by unanimous decision of the judges. “The fight has been very slow, I think that if it had been six rounds I could have knocked him out. In November, in theory, I will fight six rounds, to see if I start knocking out”, explains the boxer from Gallego Prada. 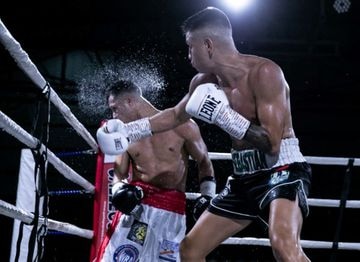 ‘Professional boxing is taking a lot of weight in Ecuador due to the work of promoters and the diffusion in the media’ | Other Sports | sports
Boxing: A new day of Liga4Boxing Visornets arrives
“El Elegant”, policeman by day, boxer by night
BOXING 4229

Loading...
Newer Post
Belgian GP F1 2022: The director of Alpine, annoyed with Oscar Piastri: “I wish I had more integrity”
Older Post
Boxing: Dmitry Bivol vs Zurdo Ramrez, another of the great fights to come in 2022