Galya Cabrera wins a silver medal and 7 medals in boxing 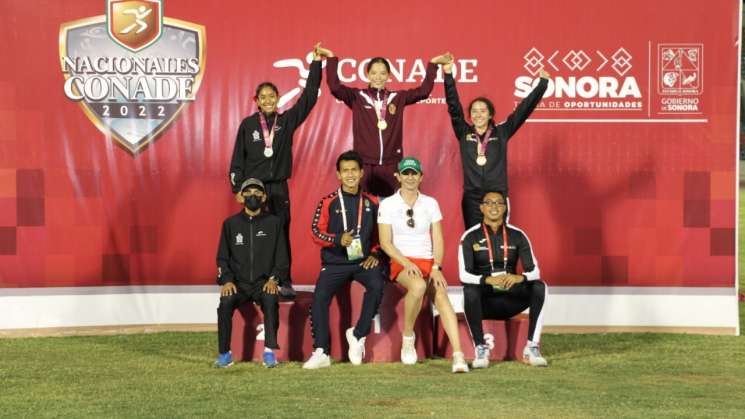 oaxaca.- With a time of 57 seconds and 26 hundredths, the Oaxacan sprinter Galya Ameyali Cabrera Durán, won the silver medal in the 400-meter flat

oaxaca.- With a time of 57 seconds and 26 hundredths, the Oaxacan sprinter Galya Ameyali Cabrera Durán, won the silver medal in the 400-meter flat test, under 18 women, in her debut at the Conade 2022 Nationals held in this city.

The first place went to Jacqueline Avilés from Guerrero, who stopped the clock at 55.25 to win the gold medal and the bronze went to Paola Mireles, from the State of Mexico with a mark of 57.33.

The gold medalist took two seconds ahead of the Oaxacan, who entered into a close duel with the Mexiquense and a little further behind the Veracruz and Guanajuato, who still scored 57 seconds on a hit where the last place made a time of one minute , one second.

This is the debut of Galya, who had to wait two years to qualify for the test between the pandemic and the elimination of the category in which she was going to compete, but this time she took to the track with the security that characterizes her; she in lane number six and with the fourth fastest seeding time.

For this Thursday, the national runner-up will enter the track again in search of another medal but in the 200-meter dash, where the rivals will be the same as in the 400-meter race and where she hopes to improve her time.

In addition, at the Sinaloa headquarters, Oaxacan boxing finished its competition with a balance of two silver medals and five bronze medals for a total of seven medals, in a good performance by the state team that got on the string to fight in each fight. .

The silver medals were the work of Jessy Concepción Velasco Martínez in the sub 18 category, 54-57 kilograms, in addition to Diegos Sebastián Flores Cortés from Huatulco in the sub 16 category, 66 kilograms.

The bronze medals were the work of the pochutleco, Carlos Abraham Trejo, in the sub 16, of the 50 kilos; Francisco Juárez Méndez, in 48 kilograms; Brian Owen Ortiz, at 51; Edgar Noel López Cadeza, in 54 and César Augusto Camacho Díaz, in more than 92 kilos; all in the under 18 category.