George Karl, in the Hall of Fame: “My time at Madrid was one of the most important in my life” 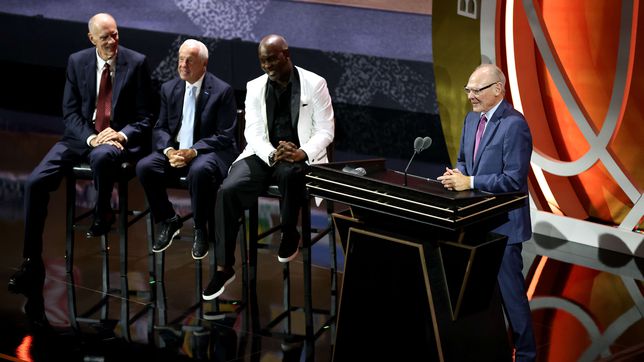 It is not easy to condense the life of George Karl (1951, Penn Hills, Pennsylvania), who this Saturday entered the Hall of Fame in Springfield, Mas

George Karl, in the Hall of Fame: “My time at Madrid was one of the most important in my life”

It is not easy to condense the life of George Karl (1951, Penn Hills, Pennsylvania), who this Saturday entered the Hall of Fame in Springfield, Massachusetts. There will always be parts of his long sports career that will remain in limbo because we are not talking about a simple basketball coach, but about one of the great NBA coaches of all time. Let’s review his resume at a glance: 27 seasons in charge of six franchises in the League (Cleveland, Golden State, Seattle, Milwaukee, Denver and Sacramento), 1,999 games managed and 1,175 wins in the regular season. Figures that make him the sixth coach in games and wins ever. Shall we continue? He has only missed the playoffs five times (two of them when he was fired mid-course), he was coach of the year in 2013 with the Denver Nuggets and was very close to the ring with the Seattle SuperSonics: it was in 1996 against the Chicago Bulls of Michael Jordan and from 72-10. It’s not bad at all.

However, what most represents Karl is the word fighter. Because he has overcome cancer three times. In 2005 he was diagnosed with prostate and in 2007 with throat, a problem that he returned to in 2016. Not only did he experience the disease in the flesh, but also through his son. Coby overcame one to his thyroid gland in 2007. An excellent three-point shooter, he played with two of the greatest players of all time, Kobe Bryant (Los Angeles Lakers) and LeBron James (Cleveland Cavaliers). And, in between, in the ACB with Joventut and Granada.

His time in Madrid

Spain was not unknown to him. Back in 1989, Coby was running around the Sports Palace at the age of 6 when his father changed the United States for the capital. George Karl arrived at Real Madrid at the hands of Ramón Mendoza. He lived two seasons in two different stages (1989-90 and 1991-92). The first of them with a great sentimental charge: on December 3, 1989, the white family suffered one of its greatest losses, that of Fernando Martín, in a traffic accident.

Karl did not want to forget his time in the white team and the sad episode of the death of the Real Madrid and Spanish legend, the first to play in the NBA, during his speech at the Hall of Fame. “Four years passed before I received my next opportunity. In those four years, the general managers of the NBA saw me train in the CBA and in Real Madrid. My time in the white team was one of the most important in my life. I grew up in many ways at Real Madrid”, said the legendary coach, who was accompanied by two members of that squad: Joe Llorente and Quique Villalobos.

The death of Fernando Martin

“The tragedy of losing a very special player when I was at Madrid: we lost Fernando Martín in a traffic accident. Those three days were the most emotional and moving days of my life,” continued Karl, who was one of 13 members of this class of 2022.

Loading...
Newer Post
NBA Mexico City Game 2022: How to buy tickets to see the San Antonio Spurs vs Miami Heat?
Older Post
“I am very happy that it is in Pilar, with my people”