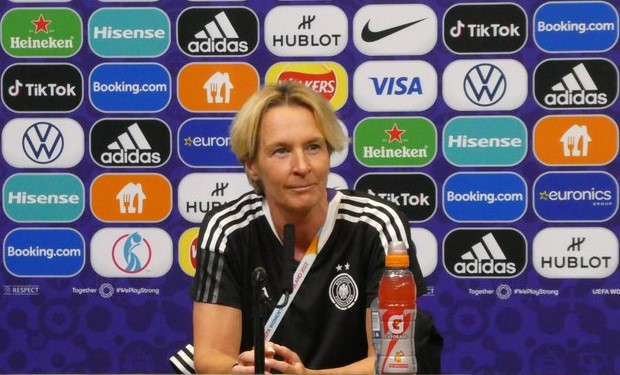 Frankfurt, Aug 7 (dpa) – The German women’s football coach, Martina Voss-Tecklenburg, stressed the importance of equalizing the playing conditions between men and women, but did not support equalizing wages with men’s football as promoted by the chancellor German, Olaf Scholz.

“On that, I have to disagree with the chancellor,” Voss-Tecklenburg said Saturday during an interview with Bayern 1 broadcaster.

“We said that the first thing we want is equality of play, that we want to have better structures, that we want the promotion of talents to be equalized and the possibility that all girls can play football,” said the national coach.

The 54-year-old coach, however, has a clear opinion about the premiums.

«I would like there to be an equalization in the premiums. Perhaps a little less for men and a little more for women. Perhaps, that at some point for the same title, men and women also get the same money. But we will never reach the dimension of men’s football. And that wouldn’t be good either,” he stressed.

The Voss-Tecklenburg side just missed their ninth title by losing 2-1 after extra time in the European Championship final against hosts England.

The German chancellor will meet this Tuesday with the president and sporting director of the German Football Federation (DFB), Bernd Neuendorf and Oliver Bierhoff, respectively. They will deal, among other things, equal pay for male and female players.

By then, Voss-Tecklenburg will have started his vacation in Mallorca, so the invitation to the Chancellery in Berlin extended by Scholz himself in the German dressing room after the European Championship final at Wembley will materialize later.

“In fact, I have the feeling that it’s not just about single, symbolic words,” Voss-Tecklenburg told the ZDF channel’s “Sportstudio” program. “Then we have to do something about it. Not just talk, but accompany words with deeds », she stressed.

During the European Championship in England in July, Scholz tweeted under the hashtag #equalpay (equal pay), among other things: “We are in 2022. Women and men must be paid the same. This also applies to sport, especially national teams.”

“It’s important that well-known personalities stand up for us,” national goalkeeper Merle Frohms said during a joint appearance with the coach on Saturday night.

During the ZDF program, Voss-Tecklenburg also stressed the need to introduce a basic salary in the Bundesliga, promote talents more and play in prime time.

He said that talents from the women’s sector would have to be admitted to the youth development centers (NLZ) of the big clubs, which so far has only happened exceptionally.

According to the coach, her first plan would be to be able to turn all Bundesliga players into professionals, which would mean having basic salaries in the league. “But not equal pay on the men’s scale,” she stressed.

In Voss-Tecklenburg’s opinion, 50 percent of Bundesliga players have to do some work to support themselves.

The next international match for the women’s soccer team is on October 7 against France in the German city of Dresden.

In any case, the European runners-up can count on the support of Scholz. During the Europe they also obtained strong support from the former German head of government, Angeka Merkel.

«What I liked the most were Angela Merkel’s charismatic and intelligent messages. She watched every game and she supported us, and that was great,” Voss-Tecklenburg noted.