Giannis ruins LaMelo’s night and the Bucks freak out 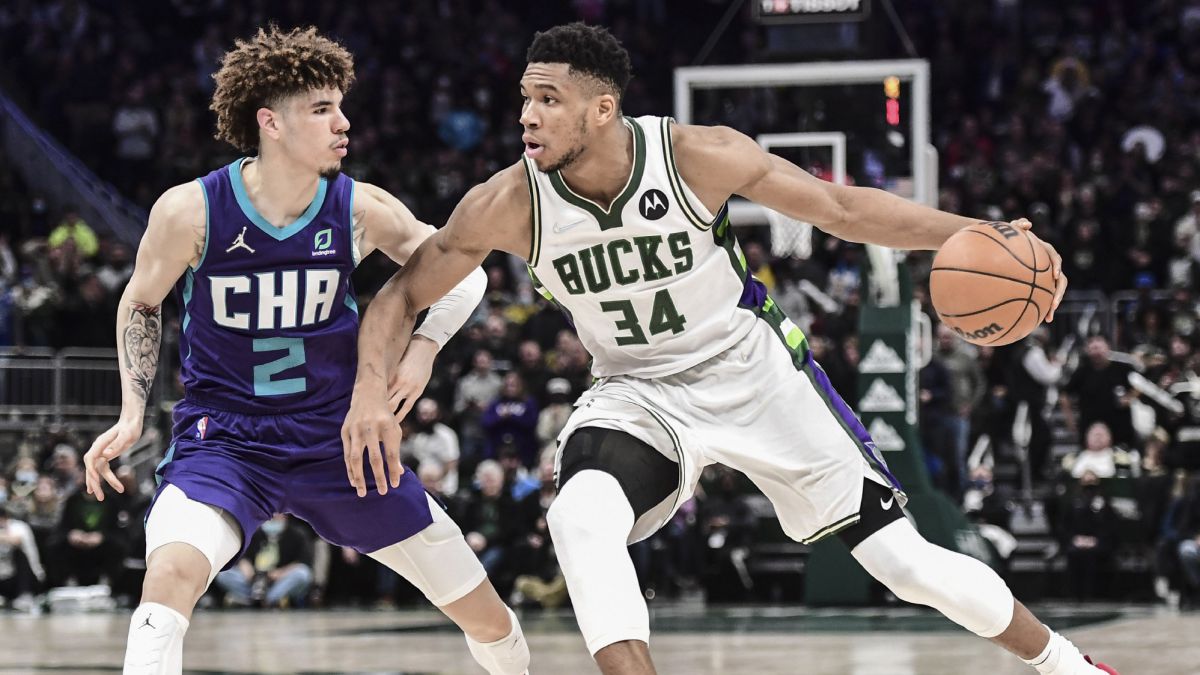 Match at the top. Milwaukee has seen a duel in the East that will give a lot to talk about. LaMelo's best game was ruined by a Giannis who is th

Match at the top. Milwaukee has seen a duel in the East that will give a lot to talk about. LaMelo’s best game was ruined by a Giannis who is the general captain of the best league in the world. The Bucks, reigning champions, add their eighth consecutive victory and begin to emerge as the team they have always been. The insatiable, resilient, tough and magnificent Bucks, that team that survived criticism and a heart attack playoffs, came back from 0-2 in the Finals and conquered the first ring in 50 years. Half a century of waiting for a small market, but a city that understands basketball. And the victory against the Hornets is also the evolution of a group that has been able to do everything, to another that knows that it is a winner and acts accordingly. Who has left behind despair and the need for urgency to give way to that superiority complex that takes over who has won a championship. A sensation necessary to win and which they showed in the last playoffs. From Game 7 of the Conference semifinals against the Nets, to the cry of “Bucks in six“when they were 0-2 down. Immortals.

Giannis is a totally different player today than we saw in the bubble. It already was in the last playoffs. Public opinion, that place where the battles that decide wars are won and lost, sentenced him at just 24 years of age: that he did not know how to play, that he did not know how to pass, that he was a robot and that he had no foundations. All this was told to a player who now, with 27 (he meets them on December 6), is the reference of an NBA that does not wait for anyone or wait for him, but has conquered with tenacity and effort, ignoring the Criticism along with his coach, the survivor Mike Budenholzer, conquering MVPs (two of the season and one of the Finals), the award for Best Defender and endless records that will only increase due to his precociousness and the project settled that the Bucks count on, who have him tied for life thanks to those 228.2 million in five seasons that he signed a few months before winning the ring. The biggest contract in history for one of the best players in history. It already is.

The atmosphere at the Fiserv Forum was playoffs. A constant give and take, everyone on their feet, benches screaming and fans cheering. The Hornets, a team that is in a lower place than it promised at the beginning of the course (13-11, ninth behind the Celtics and with the Knicks, tenth, lurking), they arrived determined to take the victory: 41-25 in the first quarter, an exit similar to that of a rocket that was forged with supreme success , translated into 10 triples in 17 attempts (21 of 51 at the end of the crash). The Bucks reacted gradually, took the second and third periods, adjusted just enough in defense and entered the last 12 minutes 2 up: 97-95. And two upstairs were left after a last quarter of a heart attack in which everything happened, there was everything and the giant took the game over the little one, that team that wants to be the future but still cannot with a present that will last as long as Giannis wants. That’s what a legend is for.

The end was tachycardic: two free throws by Gordon Hayward put the Hornets ahead (120-118) within the last three minutes. GIannis Antetokounmpo draws and Mile Bridges gives the visitors an advantage again. And from here, the madness: triple by Khris Middleton, who with two free throws gives the Bucks a three-point lead (125-122). LaMelo Ball tied after James Borrego’s timeout. Lo for Budenholzer and Giannis scores a spectacular layup that ends up being the winning shot. But it was very close to not being: with 2 seconds to go, Bridges shot from the center of the field and the ball made the tie in the basket. Very close was the machado and a final stretch full of huge and wonderful highlights. The fans exploded feverishly, Giannis greeted LaMelo sportingly and he changed his shirts with him and everything remained in the memory of a new night of regular season that will be lost in memories. But a duel that we will be able to see again in the playoffs and that will be differential to analyze the hunger of the Hornets and the ability of the Bucks to endure it all.

In the Bucks (fourth at 14-8, same record as the Bulls and Wizards, third and second respectively) the hero was, of course, Giannis Antetokounmpo: 40 points (15 of 24 shooting), 12 rebounds and 9 assists, although 6 losses. Up to seven Bucks players reached double digits, with Middleton, 21 + 6 + 5, a perennial lieutenant. He debuted, by the way, DeMarcus Cousins, the brand new signing of the Milwaukee team: he did it with 7 points, 4 rebounds and a great triple from the corner that aroused the applause of a fans dedicated to his reappearance and the history of a man whose history injury is only matched by his incredible talent. In the Hornets, LaMelo broke his scoring mark, with 36 points (12 of 22 in field goals and 8 of 15 in triples) and added 5 rebounds and 9 assists, although, like Giannis, he was insecure on the ball and lost up to 7 balls. Kelly Oubre Jr.’s 25 points, Bridges’ 22 and Gordon Hayward’s 18 (with 5 assists) They completed the good performance of a team that leaves without a prize. But set a precedent: to challenge the champion. The Hornets are talented, that’s for sure. It only remains to be seen what they will do with it. We will see.