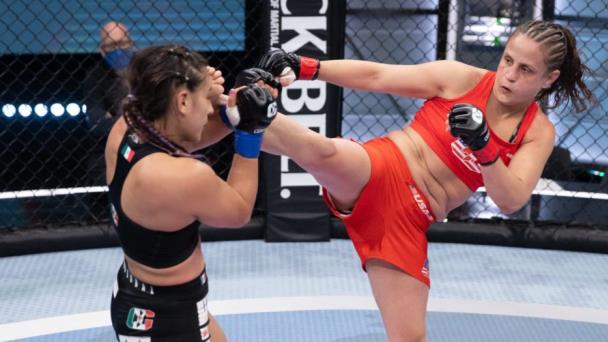 MEXICO CITY, AUGUST 5, 2022 – Combate Global presents its five-fight Mixed Martial Arts (MMA) card for today, August 5, from Miami, Florida. The fans will be able to enjoy the emotions of these fights through the Channel 5 signal, at 11:00 p.m.

In the main event at lightweight (155 pounds), the fans will be able to enjoy a new classic between Mexico and the United States, when Cristian “Púas” Pérez (9-1) clashes with Samuel “Gato Callejero” Álvarez (7-5). ).

At 22 years old, “Púas”, originally from Ensenada, Baja California, is ranked as the second featherweight in the world by Combate Global, being also recognized in 2021 as “fighter of the year”. With a streak of five consecutive victories, four of them by technical knockout or submission, he started this 2022 with a unanimous decision victory against the Spaniard Sebastián Santana Guedes.

On the other hand, “el Gato Callejero”, a 29-year-old Brazilian Jiu-Jitsu expert, has a 4-1 record in La Jaula de Combate Global, and this match is preceded by a split decision win against the Mexican Jordan Beltran.

As for the women’s strawweight (115 pounds), the Spanish Muay Thai champion, Claudia Díaz (18-11-1), will face the Texan Andrea Amaro (2-2-2) and the other fight in this category will be starring by Alison Beth Milliron (2-1) of Missouri Vs. Tanya Nijjar of Canada.

And, finally, in a middleweight matchup (175 pounds), Baja Californian Iván “Choko” Castillo (22-15) will face Panamanian Vernon Ramos (7-1), while in the preliminary fight, they will collide in a agreed weight (150 pounds) Axel Díaz (4-2) from the capital against Chris Boasso (3-3) from Miami.

Oliveira will defend his belt against Poirier at UFC 269 – Luces del Siglo
MMA: The terrifying KO of the strongest Real Madrid player in the world: he turns his face with a punch and leaves him unconscious
Joe Rogan recalls Charles Oliveira’s latest UFC loss
UFC/MMA 1052