Golf, a sport for the whole family 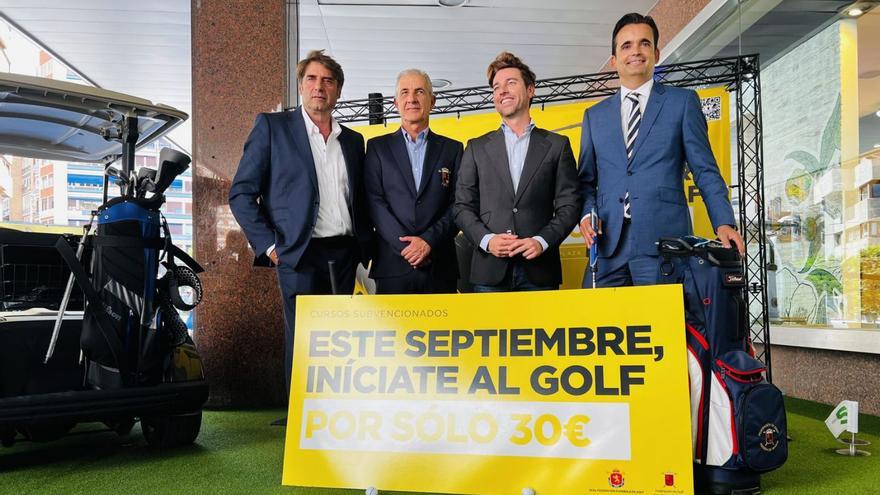 In September the routine returns, and this includes reinforcing healthy habits, such as practicing sports. And if we talk about

In September the routine returns, and this includes reinforcing healthy habits, such as practicing sports. And if we talk about healthy sports, suitable for all profiles and ages, that is golf. The campaign This September, get started with golf, launched by the Golf Federation of the Region of Murcia, has today registered 320 people interested in having their first contact with this sport by professionals in the sector, in courses subsidized by the Federation itself and the Royal Spanish Golf Federation. The success has been such that they hung up the sold out as soon as the campaign began and have had to increase the places provided to be able to meet the high demand. Those interested in learning more about this sports practice have until September 20 to enroll in these courses.

It is an initiative “to bring golf a little closer to the public and show the advantages and benefits of this wonderful and addictive sport”, pointed out the president of the Federation, Juan Carlos Martínez Vera, during the presentation of the campaign at the Putting Green installed on Avenida de la Libertad, next to El Corte Inglés. The message they intend to send is that this sport “is not only for men, foreigners or older people”, but that it can be played “with family, or with friends, because all ages are united in this sport”.

“Even people over 90 years of age can practice it, such as children from 3 and 4 years old, and even play with the family, outdoors and in a wonderful environment,” added Joaquín Medina, president of the Association of Entrepreneurs of Golf in the Region of Murcia. He took the opportunity to recall that playing golf is “health and brings quality to life”, encouraging “removing the curtain from golf courses as if they had a barrier”, to understand them as public establishments and accessible to anyone who wants to enter and discover this sport.

«Golf is a sport for everyone, capable of uniting a father, his son and his grandfather on the same course. It is a new opportunity”, added the General Director of Sports of the Autonomous Community, Francisco Javier Sánchez, who applauded those who work “so that golf has a key meaning in this Region”.

“For us it is a satisfaction to contribute our grain of sand for a cause that is so healthy and beneficial for all citizens,” Rafael Álvarez-Ossorio, director of El Corte Inglés, highlighted during the presentation.

The Golf Federation of the Region of Murcia currently registers 6,830 licences, which places it in fourth position, out of 59, at the national level. As highlighted by the General Director of Sports, “today there are more than 1,000 new federative golf licenses than a year ago”, a figure that with campaigns like the current one provides “a new reason to approach golf courses”.

Juan Carlos Martínez Vera alluded to the Olympic Talent program as “part of the success”, since it has made it possible to achieve more specialization in this sport. This initiative “provides young people with tools so that this Region continues to export sports talent and be successful,” added Francisco Javier Sánchez. Successes that are reflected in names such as María Parrón, who in 2007 won the Spanish Children’s Golf Championship, and who are now followed by new names such as Luna Isabella Valencia, new champion of Spain in the 2022 Women’s Alevín category, or Bruno Quinto, runner-up of Spain Male Alevín.

“We love to see every Murcian outside our Region lifting trophies, and we want them to be golf too, because we are investing in everyone’s future,” concluded the Director General of Sports.

Loading...
Newer Post
NBA rumors: The Utah Jazz preferred Collin Sexton over RJ Barrett
Older Post
How to buy tickets for the Spain-United States, final of the Under 17 World Cup in Malaga