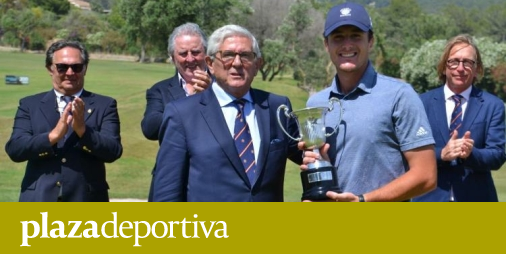 VALENCIA. Carlos Alejandro Garre has been proclaimed Spanish Men’s Individual Champion, in the Absolute National Golf Course played this weekend in Pula Golf (Majorca). The player attached to the Valencian Federation made a last day of 68 hits for a total of 282 hits (-6), one less than Jose María Serra and Ángel Ayora, who helped him win the title. Garre succeeds the Canarian Álvaro Hernández, winner in 2021 in Guadalmina. Twenty-three years later, the FGCV achieved the Absolute Spanish Championship, after Carlos Aguilar achieved it in 1999, just as Sergio García achieved it in 1997.

Together with this final triumph of Carlos Garre in Pula Golf, which confirms that the Valencian Federation is going through a second golden age, in this Absolute Individual Spanish Championship we must highlight the good work of other Valencian players such as the twenty-fifth position achieved by Javier Balbastre, who made a very good tournament as evidenced by those 5 birdies and a eagle. The rest of the FGCV players who made the cut in this national competition were Raúl Gómez (32), Rubén Lafuente (36), Carlos Roldós (36), José de la Concepción (45), Alejandro Rodríguez (49) and Carlos Abril (53).

In the Women’s Individual Spanish Championship played at Club de Golf Uzama (Navarra), won by Cayetana Fernández, it is worth noting the presence of up to five Valencian players among the top twenty in the competition. Carla Tejedo, sixth, confirmed the good player she is after doing the best lap of the day on the last day. After her, Sara Sarrión was ninth, Carla Bernat thirteenth, Balma Dávalos sixteenth and Andrea Miralles finished in eighteenth position, all of them among the top twenty. It would not be fair not to highlight the good performance in Navarra by Natalia Fiel (24), Cloe Amión (32), Julia Ballester (35), Martina Navarro (44), Lucía Valderrama (53), Xinyi Gu (63), Clara Martínez (63) and Isabel More (66).

Loading...
Newer Post
Does Carlos Sainz still have a chance of winning the title?
Older Post
MotoGP | Rins: “Spencer is too old for the ‘stewards’ panel”