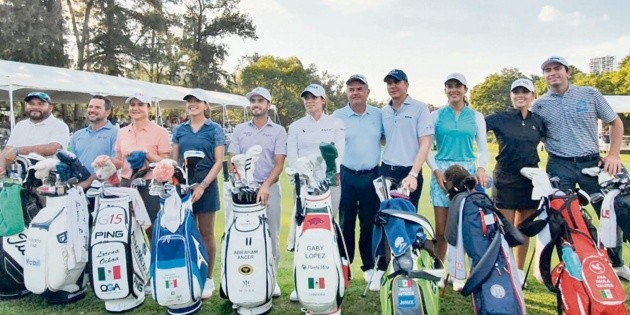 A very special weekend started at the Guadalajara Country Club where for the first time the top 10 Mexican professional golfers gathered for a charity exhibition event for the Lorena Foundation Ochoa.

On the first day of activity, a pro-am was held where a professional is assigned to a group of four amateurs to compete the 18 holes in an “a go-go” format where, once the first shot is hit, the five team members play from where the best placed ball is, and so on.

In this more relaxed format, it was possible to observe the players interacting with their teammates and with the good number of spectators who gathered in one of the most special events that have been carried out in Guadalajara.

The group with the largest number of fans was undoubtedly the Abraham Ancer, who during the 18 holes of the game was seen taking photos, giving autographs and talking with the gallery that did not stop encouraging him.

Gaby López, from the capital, was also seen to be very active giving away photographs and autographs to those who asked. As is a custom in her, always with a smile and very kind especially with the girls and boys who showed their admiration for the best Latin American golf player.

Without a doubt, the sensation was also Lorena Ochoa, who was the creator and the reason why this event is now a reality.

In addition, Lorena returned home after many years and was received with the same affection and admiration by the people who saw her grow and develop in her field.

Today (Saturday) the competitions between the professionals will be held where first thing in the morning and shootout will be played in which the players will be eliminated and later go on to the match where Lorena Ochoa and Álvaro Ortiz will face off against Gaby López and Abraham Ancer.

The meeting of the 10 best golfers in Mexico to play the Charity Classic Exhibition Tournament, is with the intention of promoting golf and raising funds as it is done in the United States.

“For many years we said that the United States does benefit tournaments and we don&#8217;t. This for me is a dream, now this benefit tournament is the perfect combination. It&#8217;s a golf party and a way to thank them. It is for the little ones who can see their idols up close and be inspired, ”Lorena Ochoa commented yesterday.

The proceeds will be for the benefit of the Foundation and the Guadalajara Foundation. Country Club, to support the comprehensive development of low-income children and adolescents.

The former number one in the world, also took the opportunity to advise all parents who seek to help their children to be the future stars of golf.

“Dads have to be smart. Let what children do do it for pure love and fun. Don&#8217;t force them, don&#8217;t force them. If they want to play another sport, let them do it. In the end, if what they like the most is golf, they will come back. This way they develop many skills in other disciplines, they make many friends, they get distracted, they learn to play as a team and they become more responsible ”.

This will be just the first edition of this tournament, which is already agreed to take place for the next two years, in 2022 and 2023.