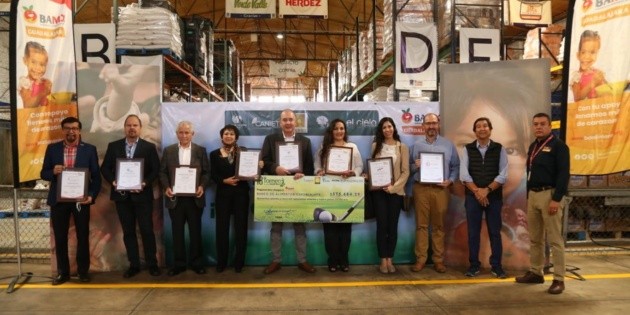 With the completion of the 18th edition of the American Chamber Adolf Horn golf tournament It was shown that with the participation of giants, the results are also enormous.

Engineers Dina Grijalva from CANIETI, Rafael Farga from AmCham, Guillermo del Río from CADELEC and César Castro from INDEX, joined not only their collaborators, but also their affiliates, to achieve the best edition of the tournament, therefore, on this occasion there were many more players, more sponsors and more prizes. It is pertinent to include the engineer Julio Acevedo who also joined, not only in the organization, but in attracting sponsors.

The work of the members of the organizing committee was impeccable, which was joined by the team from Country Club El Cielo. The tournament was very well organized and was held on time, even the weather was perfect for them.

The consensus among the participants is that the most attractive thing about the tournament was the issue of hunger and how the Food Bank is making a great effort to end it in Jalisco. Organizers, players, sponsors, all agreed that the main motivator for participating this year was precisely the importance of to help one million two hundred thousand people who have a lack of food in Jalisco.

With this participation, the tournament organizers achieved a record recruitment and thus were able to deliver a check for 575 thousand 684.29 pesos to the Guadalajara Food Bank.

The gratitude was also very heartfelt. The check was received by Lic. Ricardo Romo and Ing. Julio Acevedo, Director and Vice President respectively of the Guadalajara Food Bank. “This amount will allow us to bring food supplies to two thousand families for a year,” said engineer Acevedo.