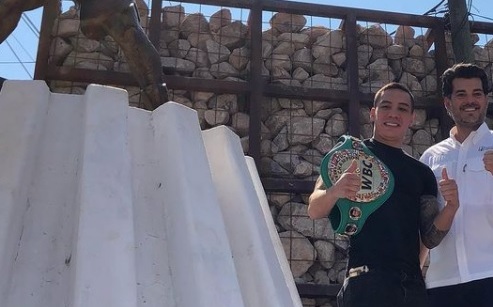 As a recognition of his sports career and for being an example for the children and youth of Nogales, the new Municipal President of Nogales, Juan Gim, gave the keys to the city to the Mexican monarch Oscar Valdez.

The mayor received the monarch of the World Boxing Council in his office for later in a formal event, highlighted humility and assured that he represents the best values ​​of that land.

The two-time world champion, at 126 and 130 pounds, acknowledged that as a child he dreamed of being recognized in boxing, the sport in which he started at the age of eight, and to which he has dedicated more than two decades of experience. life.

After receiving the keys to the city, Oscar Valdez along with municipal officials, including the mayor and the local sports director, Marco Martínez, moved to the boxing gym where the Central American, Pan American and world medalist trained as a child.

Tags: Hobby, Mexican boxer, Nogales
José Toledo, leader in the Professional Golf Tour in San Miguel de Allende
Pink Floyd and his love of football
NBA. These are the title contenders in the 2021-2022 season
BOXING 966