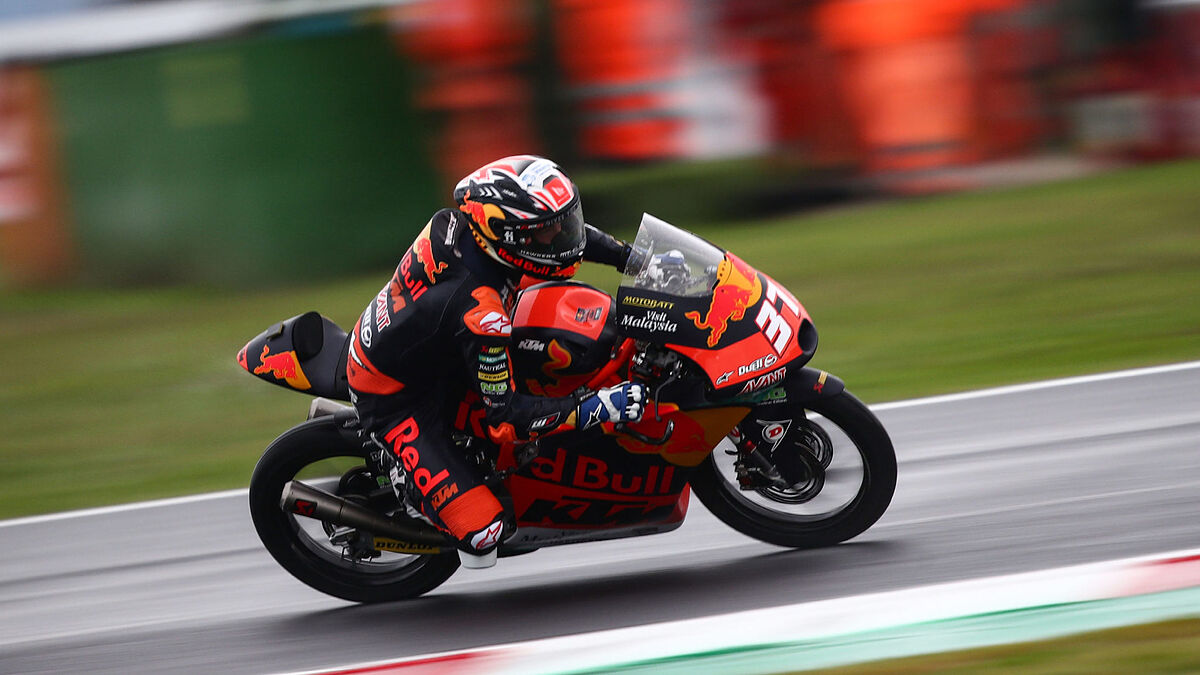 Dennis Foggia won in Moto3 in Misano to extend the World Cup. Masi was second and Acosta, third. Pedro did not tie the title, but his final push

Dennis Foggia won in Moto3 in Misano to extend the World Cup. Masi was second and Acosta, third. Pedro did not tie the title, but his final push may be vital.

There were forced changes to the grid. They were injured by Sergio Garca and Gabri Rodrigo and by penalty Deniz nc, replaced by Dani Holgado. Aji run as a guest.

Competitors had to go out blind: The ‘warm up’, dominated by Acosta and with Foggia behind, was still in the wet and the race was the first time they had run dry, with 19 degrees in the atmosphere and 17 on the asphalt.

They all came out with a medium rear tire … except the Murcian who preferred the hard. To beat the title, you must win and Foggia be 12 or worse.

Pedro made a discreet exit: went from fifth to eighth on the initial curves. Antonelli kept the pole position. Guevara stuck to Nicco. Foggia was 16.

Nepa cut off Antonelli’s pull attempt. Acosta passed Rossi to get sixth … with Binder behind. Foggia was growing too, albeit timidly.

Antonelli passed his compatriot unceremoniously and Acosta struggled not to cut himself. He did it by passing to Guevara. Foggia was 13, but in the second group. Nine pilots had gone up.

Riccardo Rossi falls at Turn 10 in an incident with McPhee. The Italian knocked with his elbow on the rear of the Scottish motorcycle. The test did not stop.

Foggia took the initiative. The fall was good for him to get tenth and he was already pulling the rear group. Acosta was fourth.

Antonelli’s pace was not very high and Dennis was cutting back. The ‘Tiburn de Mazarrn’ was contained and had not just launched into overtaking. McPhee, who had resisted before, had an accident.

With 14 laps to go, Foggia reached the bottom of the group and was ninth. The title was complicated for the ’37’ … in Misano. Suzuki fell, he was far behind.

Binder reached the front area, but Acosta put himself first with 12 laps remaining after a scare from Antonelli and a great braking from KTM Ajo.

The hostilities and the tension began: Foggia surpassed Binder with a touch and Acosta had several startles. Soon he dropped to fourth place and was betrayed by Foggia. Danger. Migno who had been climbing had an incident.

When there were nine left, Foggia reached first place. Acosta was fifth and he did not look comfortable. Tatay was retiring due to ankle pain.

Dennis was shooting like crazy. And boy did it work: Pedro stayed and even Nepa surpassed him. Four were ahead: Foggia, Masi, Binder and Guevara.

Izan Guevara kissed the asphalt at Turn 8. A shame for the rookie, but it gave Acosta more points. Pedro passed Nepa, who had a fright at the last angle. But Stefano was still glued to the leader of the World Cup.

Foggia’s great rhythm took Binder down. Only Masi, Pedro’s partner and Dennis’s old pit neighbor, stayed with him. Nepa went back to Acosta. Antonelli joined both of them. Kunii fell.

Jaume had in his hand to do a great favor to his compatriot, who was approaching a Binder who was losing steam.

Foggia took the final turn in the lead. Acosta forced and it happened to Nepa and Binder. Masi could not find holes and could not with Dennis, who was winning. Pedro resists to be third. His caste allows him to arrive with 21 points to Portimao. It will be worth him to win in Portugal to be champion. Everything is postponed. That’s right, Acosta will no longer be the youngest champion in history. Capirossi keeps his record.

Pedro was serious on the podium and in his statements. “The podium was important, but I’m not happy,” he released. Mais wasn’t entirely happy either. “I’m not happy about the last laps,” he said. Obviously, Foggia was: “The bike was perfect.”

Loading...
Newer Post
Boxing: The statue of Mike Tyson, in the style of Cristiano Ronaldo, that sets fire to the nets
Older Post
The new AIBA is on the move: white gloves, belts …