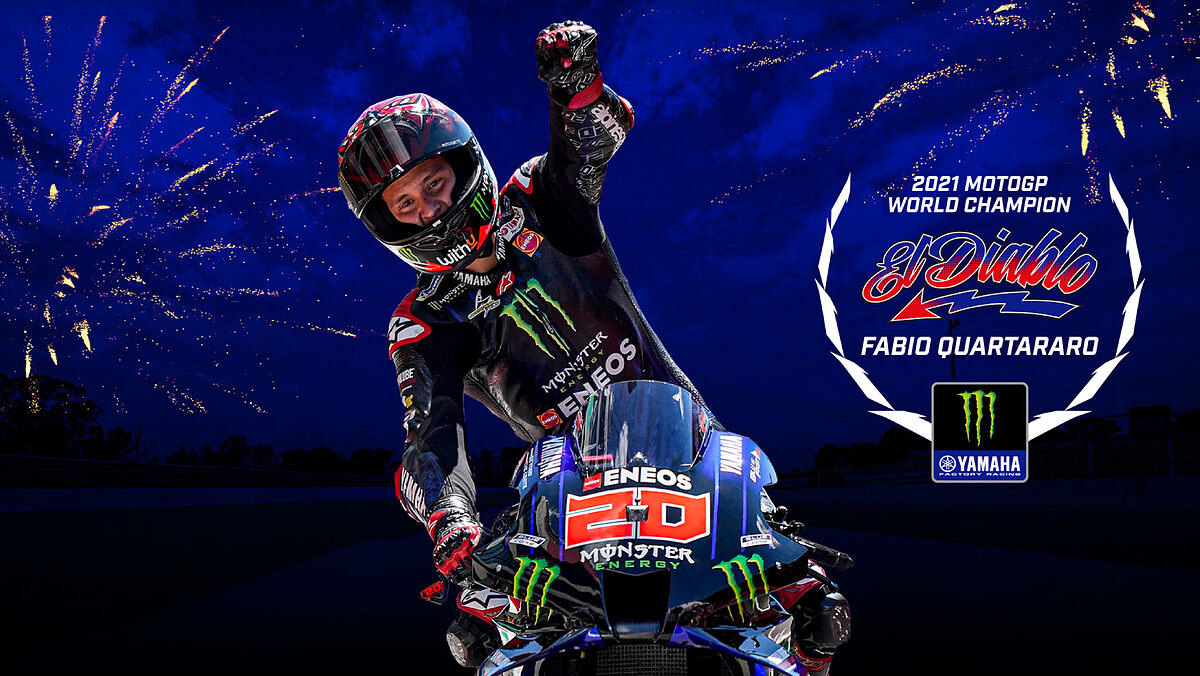 Updated 10/24/2021 - 14:45 Fabio Quartararo is already MotoGP world champion. The French was favored by the fall of Bagnaia, when he was leading

Fabio Quartararo is already MotoGP world champion. The French was favored by the fall of Bagnaia, when he was leading. Marc Mrquez won the race.

Before the test there was numerous tributes: Rossi yellow everywhere, including Marini’s bike, like those of Moto2’s Sky, to Gresini, memories to Simoncelli, to MV Agusta …

As expected, the race was dry and with the highest temperatures of the whole weekend: 18 in the environment and 24 in the asphalt. The ‘warm up’ had still been very damp, with which they started almost blind.

Brad Binder crashed on the formation lap, was able to return, but was last on the grid, moving Valentino one place. Almost all came out with medium front and soft rear rubbers. The exceptions: Quartararo: medium and medium and Bagnaia and Miller, hard and medium.

Bagnaia kept the pole position. It seemed that Miller had won the game, but the Australian did what he had to do: allow Pecco to take the lead. Marc Mrquez movie theater to get third. Quartararo traced back in the initial lap what he had lost in the start to be 13.

Mir skipped the start and was penalized with a double pass through the ‘Long Lap’ area. He did not have time to fulfill it: he fell to the ground and Petrucci could not avoid the impact. Luckily, nothing happened and they ended up hugging.

Bagnaia could not escape and Miller had to cover all the gaps because Marc was going with everything to overcome them. Pol had already gotten rid of Oliveira. Quartararo was 12 after passing Zarco.

Miller did not do his job: he fell only at Turn 15. Pecco was left without a shield … and more points for Fabio.

The Gaul went up, but without going crazy: he passed Lecuona and was already tenth. He knew that, above all, he had to finish and add what came to him.

The turins resist the push of the ilerdense. Both were very far from the rest. Pol kept Oliveira at bay. Fabio passed Jorge Martin to be ninth. The one from Nice was after the good rhythm of Rins. Nakagami was going to the ground. It was not even in the points.

Lex Mrquez was retiring for technical problems. Lecuona fell. Both were looking to score.

Jorge Martin had a strong incident at Turn 1. He was tenth. Quartararo came to the group led by Aleix Espargar, followed by Morbidelli, Marini and Rins. Lex showed him the way quickly, surpassing Rossi’s brother.

Morbidelli gave up places and was passed by Rins, Quartararo, Zarco and Marini. The Gaul was already seventh. An excellent Pol took meters with Oliveira to consolidate the third place. Binder was sanctioned with going through the ‘Long Lap’ for exceeding too much the limits of the track.

With 11 laps to go, Bagnaia forced even more the machine: beat the track record. However, the eighth champion remained behind. Quartararo was also risking and overtaking Rins. He had Aleix within range.

And the Yamaha one, after a couple of passes, left the oldest of the Espargars behind. The only bad thing for Fabio was that Oliveira, the fourth, was more than eight seconds away.

When there were six turns left, Marc began to give in. Tenth by tenth, the Catalan was watching the Italian go away.

But when he had the race in his pocket, Bagnaia falls at Turn 15. It traced the Miller incident. This made Quartararo was champion of the world. He didn’t even need to finish to tie it up.

Marc, again, was a judge. His harassment influenced the fall. His perseverance gave him the victory and the double for Repsol Honda, the first since 2017.

Fabio was marked on the blackboard. Bastianini, coming from behind, caught the Gaul. It was the least of it.

In the farewell to Italy of Valentino and with the ‘tifosi’ wishing the victory of a pupil of his, the Catalan prevailed. Bastianini lunged and passed Quartaro on the last lap. It did not matter. He was a champion.

Fabio, crying, had a electronic party celebration after going for a red carpet. Bagnaia was then the first to congratulate him on reaching the pit lane. So did Marc Mrquez. The Gaul did not stop shedding tears. He could barely speak: “I still don’t believe it. I feel incredible, I’m living a dream. I love that my family is with me,” he said. His people and all of France, for he is the first in this country to achieve the title in the queen class.

Loading...
Newer Post
Mercedes team takes aim against Formula 1: “They woke up the lion”
Older Post
Dana White loves blackjack but hates sports betting as she remembers a $ 1 million boxing bet she lost that ruined her Cabo vacation despite the UFC president making a $ 100k bet on Canelo. Alvarez.