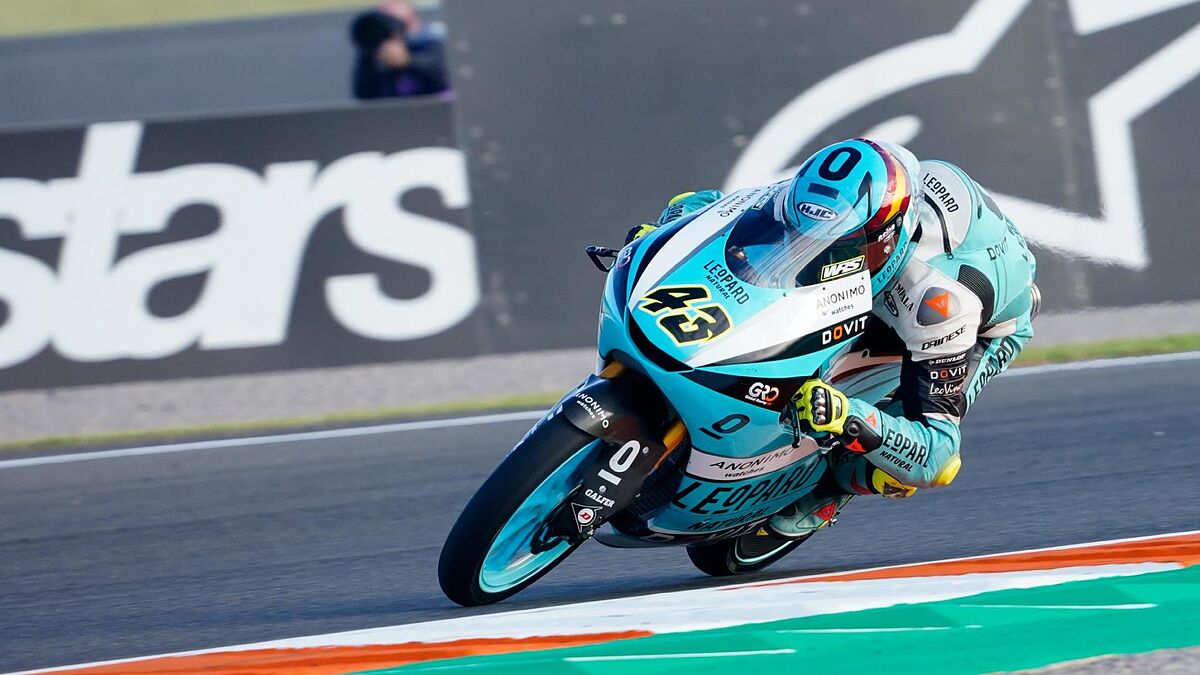 Updated 11/14/2021 - 11:48 Xavi Artigas won a crazy Moto3 race in Valencia with countless overtaking. Acosta went to the ground.Adrin fernndez I

Adrin fernndez I already knew before leaving that I had a penalty of going through the ‘Long Lap’ zone twice for slowing down in training.

No rain for the race. Quite the contrary: Sun, with 20 degrees in the environment and 22 on the asphalt.

Pedro Acosta made an excellent start. For the first time I defended a pole and performed perfectly and kept the first place. The scare came at Turn 4. They fell in two different falls Lorenzo Fellony Darryn Binder. In order not to collide with him, Yamanaka also went to the ground. Luckily, there were no accidents and everyone was successful.

The Murcian had a start and was close to falling. I saved him, but he lost his position of privilege. Suzuki took command. But the Tiburn de Mazarrn recovered quickly to make several overtaking without hesitation and return to the lead.

Acosta wanted to lead at all times. Guevara passed him by slipstream and he reacted with his braking. They looked like the FIM CEV Repsol races last year.

The australian Joel Kelso, who supplants Kofler, went to the ground and Rueda, who debuted, could not avoid the impact. A shame for the Sevillian who was shining.

Deniz nc, who was returning after two penalties for causing the Austin accident, soon received a warning for exceeding the limits of the track. The Turk was in the leading group.

The already champion tried to shoot, but Guevara would not let him. It passed him by slipstream on the straight and then had to play it in later corners. All this made the group very large and the race did not break down. That made pilots who went far back, like Masi, arrive.

With 15 laps to go, he was still ahead of Acosta, also at the end of the straight. Yuki Kunii, who was contesting his last World Cup event, had an accident. Bad ending.

Masi consolidated his impressive comeback coming from 23 on the grid to the first when there were only 12 laps left.

Acosta and Garca had a touch and miraculously they didn’t have an incident. Artigas took advantage of it to be in front. But everything changed in a couple of angles.

nc seemed to be ruled out when he was sanctioned for stepping on the green areas too much. Must go through the ‘Long Lap’ area.

It was only the first because many of them got too salty. Salac was also penalized.

Suzuki, who was in the middle of the group, crashed at the first angle. But the rear group was approaching the front. No getaways or cuts. That is why nc and Salac were back with the best.

Foggia, who had been covered, reached first place, but Acosta would not let him pull and he also surpassed him in one of his super braking. Surra kissed the asphalt. He was at the end of the group.

Those of the Leopard launched their offensive with two turns left. Foggia was taking his head back, with Artigas behind him. But the Murcian returned to pass quickly to Catalan.

Acosta passed Foggia at Turn 1, but the Italian took the inside at 2. Pedro touched the back of his Honda and crashed.. Foggia lost positions. Migno also fell.

Sergio Garca put himself first, but Artigas attacked him and passed at the last turn. Xavi won by resisting on the straight. The first of his life, the first of many. I even broke the dome with a celebrating blow. Incredible career. Crazy.

Acosta was on. “I don’t really understand where he was going (Foggia). We criticized the one who shoots two drivers (Darryn Binder) and now we don’t say anything. But hey, it’s racing,” he said on DAZN.

Then the Italian was given three seconds to add to his time for irresponsible driving and dropped to eleventh place.

Artigas was happy. “It’s a great feeling. It’s been a difficult year. It’s super important to me because a lot of people around me doubted,” he commented.