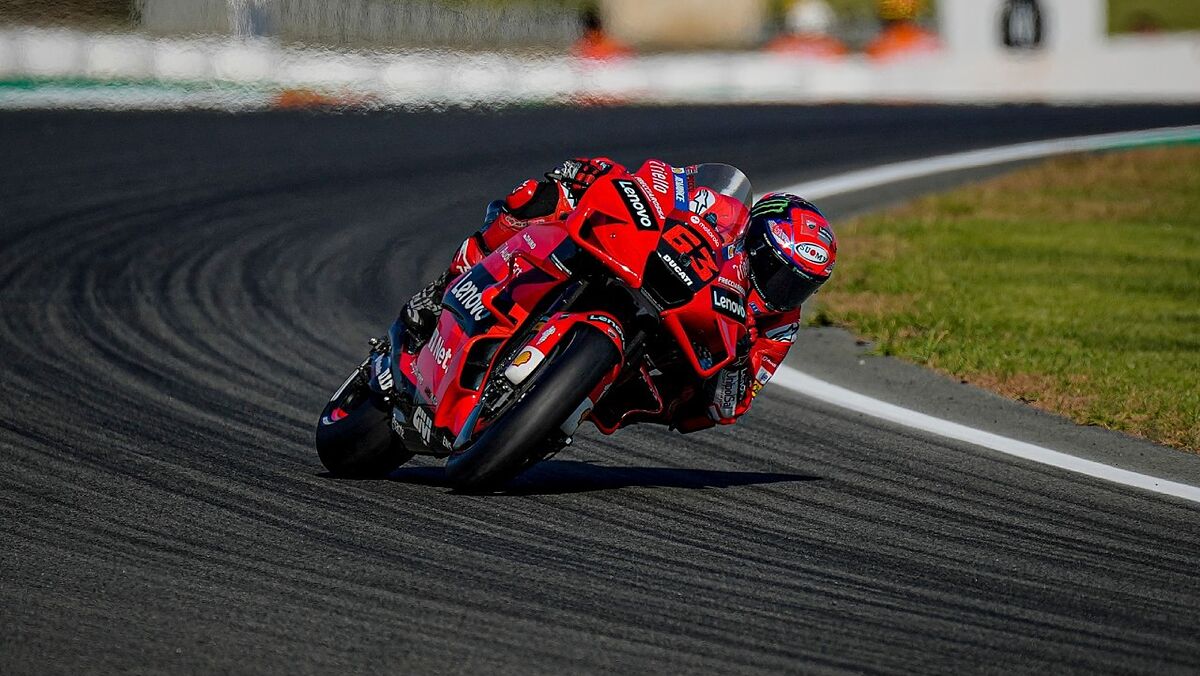 Updated 11/14/2021 - 14:46 Pecco Bagnaia won the MotoGP race From Valencia. There was a triplet for Ducati in the goodbye of Valentino Rossi.Pol

Pecco Bagnaia won the MotoGP race From Valencia. There was a triplet for Ducati in the goodbye of Valentino Rossi.

Pol Espargar, finally, did not compete. He decided to reserve himself for the Jerez test on Thursday and Friday. For the first time since Assen 1992 there were no riders from the official Honda team in a premier class race, as Marc Mrquez was not there either and he was not substituted. Neither Mick Doohan nor Wayne Gardner was there that day.

The Ricardo Tormo circuit was a show, with yellow stands for the most part. With almost everyone shouting Vale’s name from before the test started. Even Ronaldo Nazario, the footballer, came to see him.

The conditions were good: bright sun and 20 degrees in the environment and 24 degrees on the asphalt.

George Martn was impeccable at the start. He held the pole position filling gaps before Miller, who had overtaken Bagnaia. Mir could with Pecco too. Rossi was ninth.

Miller wanted war. He overtook Martn at the end of the straight after the first pass through the finish line. But Jorge would give it back quickly. Above, Mir also lunged and you overtook the Australian, who lost his rope.

Bagnaia gave a good account of his companion. Rins imitated the turins and left the ocean behind.

The Ducati was a rocket ship: Bagnaia overtook Mir on the straight as he wanted.

Joan, also, see how your partner Rins surpassed him at the moment. From second to quarter in a single turn.

The champion Quartararo wanted a decent goodbye. He passed Miller, who was in trouble. Zarco passed Rossi, who was tenth.

Nakagami, which was the best Honda (11) went to the ground at Turn 6. Horrible end of the course for Taka.

Rins and Bagnaia passed by and reviewed. This gave Martin air ahead and allowed Mir to stick to them. Also, Quartararo was approaching.

Bastianini made one of his classic comebacks and surpassed Valentino, whom he left eleventh. Miller reacted and outplayed Quartararo in the fight for fifth place. Fabio, then, was staying.

With 17 laps to go, Rins falls at Turn 6. He was ahead of him. Again when it was with the head, like other times this season. Bad end to a bad year. This put Rossi, again, 10th.

Martin, who would have had a gastroenteritis at night, continued with his great rhythm in the lead. Bagnaia couldn’t get past him. Mir suffered so as not to lose the wheel with them and Miller approached the Majorcan. The triumph was among the four of them.

Subtracting 12 + 1 turns, Pecco overtakes madrileo at the last angle to command the test.

The turins, fresh air and free, made the turn faster than trying to escape. Martn tried not to lose contact and then made his best turn. Mir gave something up and was caught by Miller.

The Australian did not hesitate: he passed, in a curve, in the 2, to the one in Palma. Three Ducati the first three.

Pecco gave another tug. Martin suffered and Miller was getting closer to him. Mir was already hanging down from the Desmosedici and Quartararo was already seeing him up close.

Bagnaia was leaving and he had the triumph in his pocket. Ducati won the team title – it already had the brand title. Martn held out for second and rookie of the year. Miller finished third. It is the first triplet for Ducati in its history. He had to beat Rossi’s pupil. Valentino finished tenth, what I was looking for. Remarkable finishing touch for a unique career. Grazie Ok.