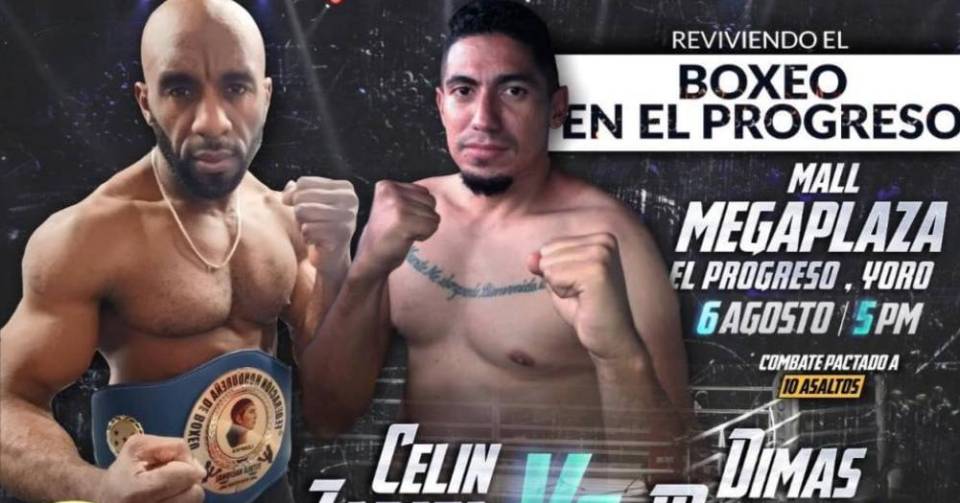 This Saturday there will be a great boxing evening in the first Professional Boxing Tournament in the city of El Progreso, under the motto Revivin

For this event there will be 4 fights: 1 amateur, 3 professionals where Celin Zapata, current national boxing champion of Honduras, will defend his championship once again against Dimas Moncada.

In the “pro” fights, the national title, the WBC Latino, and the Latino title of the RBO Organization (Royal Boxing Organization) will be disputed.

The duel between the two catrachos will be the main event that will take place at the Mall Multiplaza facilities at 5:00 pm.

This time they meet again to leave a show on the canvas with the flavor of revenge for Moncada. Everything is agreed to be a 10 round fight.

Speaking to Grupo OPSA, Celin Zapata expressed the following: “It will be a good fight because he is known as a warrior with a good punch and good experience in boxing in the super middleweight division and category.”

“For young people, I recommend that they keep up the sport, since it is something very beneficial for life, health and to be out of crime problems and all vandalism in the street,” said Celin.

The catracho began practicing boxing, then he had a great jump in arm wrestling tournaments, in which he achieved great feats. He currently only focuses on the sport of fists.

Zapata VS Dimas “The Shotgun” Moncada A 10 Round

Tags: boxing honduras
The faces of the future Cuban boxing champions
This was the fastest boxer in all history
Boxing: Fury: “Anxiety is one of the worst things anyone could have”
BOXING 4291

Loading...
Newer Post
NBA Finals: Celtics have a brilliant last quarter and beat Warriors in the third of the series
Older Post
5 NBA stars who have played in the Drew League