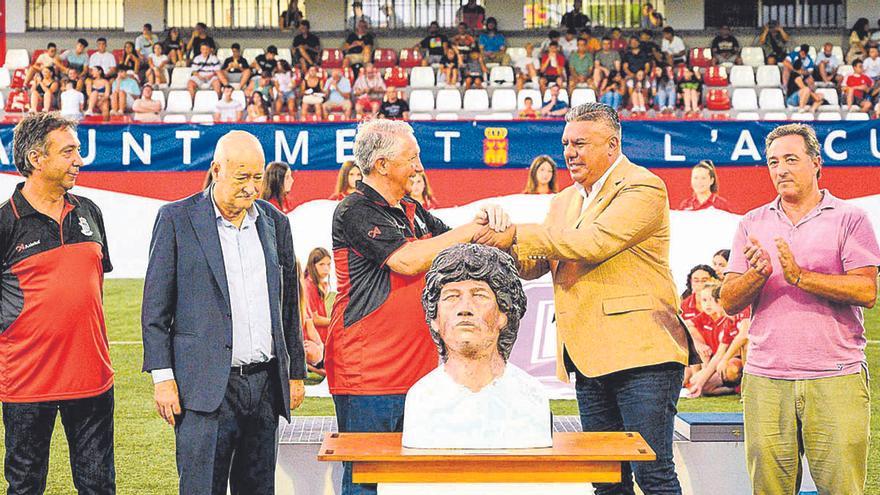 Diego Armando Maradona passed away on November 25, 2020, leaving lovers of the beautiful game orphaned. The shadow of "Fluff" is

Diego Armando Maradona passed away on November 25, 2020, leaving lovers of the beautiful game orphaned. The shadow of “Fluff” is long, football does not forget him. The organizing team of COTIF paid him an emotional tribute yesterday, taking advantage of the setting prior to the match played by Valencia CF and the Argentine national team, two of the squads that this year aspire to win the trophy in the men’s sub-20 category. Previously, the Argentine women’s team beat Elche CF by three goals to nil in the Cañamás Naranja trophy.

A photograph and a panoramic “10” jersey welcome the visitor at the entrance to the Els Arcs stadium this year. In addition, the local artist Rafa Ferri -responsible for the sculpture of the Good People Cotif award- has been in charge of modeling a bust that recalls the Argentine star in his youth. His figure is being remembered throughout the competition. The act of homage was scheduled in a previous edition, but could not be carried out due to the restrictions imposed by Covid.

Eliseu Gómez recalled that “Maradona is synonymous with football, passion, devotion”, highlighting the legacy of a player named in numerous prestigious rankings as the best of the 20th century. «He dazzled us all, he ignited the feeling of a town. A tribute to “Pelusa” will always fall short, “Gomez continued. He also recalled some of the players who have attended COTIF in the Albiceleste jersey in the last decade, such as Icardi, Lautaro or Velerdi. He ended his speech with a message to the players from Argentina who have attended this year: “You don’t come here to hang out, you come to show that you want to play soccer in the elite. To fight every ball. Great Maradona, look at football, look at COTIF».

Tags: "Maradona, Soccer, great
Chaco Hoy – boxing: Maravilla prepares to return to the ring
Messi and the legends of football at the age of 35 – The preview
Salta boxing honors “Maradona Eterno” at the top of San Bernardo
FOOTBALL 3172