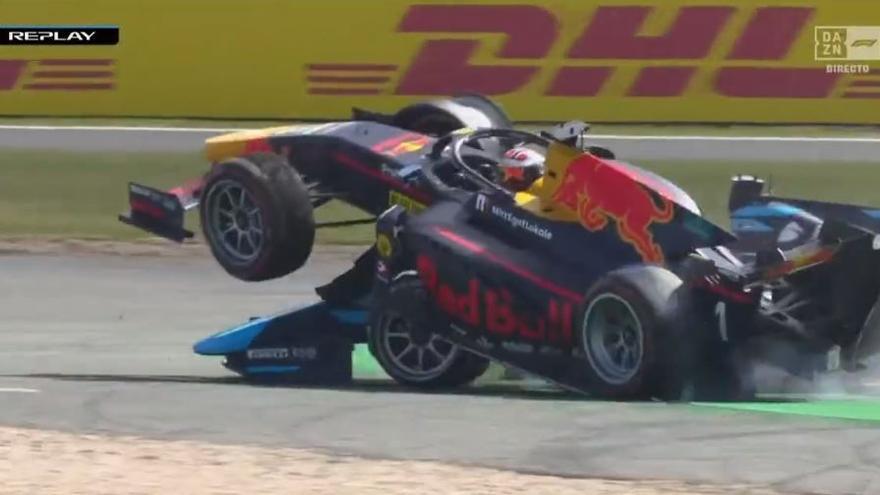 Safety for the FIA ​​and Formula 1 is fundamental. Season after season, the efforts of the Federation can be verified so that in

Safety for the FIA ​​and Formula 1 is fundamental. Season after season, the efforts of the Federation can be verified so that in a modern motorsport like the current one, tragedies and setbacks are the minimum. So much so that Formula 1 cars, for example, are increasingly heavier, among other things, due to prevention and safety devices.

Luckily it seems that the latest improvements included by the FIA ​​improve or continue to demonstrate their effectiveness as in the case of the halo. This device is not the first time that it has saved the life of a driver and this time it has done it again in the F2 race at Silverstone.

car pictures of Dennis Hauger down the middle of the track they are terrible, but even harder when the car hits Roy Nissany. This has happened after a maneuver by the Israeli that throws the Norwegian off the track, who upon leaving the track finds a piano with a banana and automatically goes flying crashing into Nissany’s car.

SAVED BY THE HALO! 😱 It’s a miracle that no misfortune has happened… 🙌

Nissany throws Hauger off the track, the Norwegian’s car shoots out when he touches the banana and ends up flying over Nissany’s 😯

This device was discussed for a long time. Both FIA and Formula 1 teams have been testing different systems for a long time. It was a priority to better protect the ‘cockpit’ and the halo ended up being the best solution. For example, in the IndyCar Series they use a kind of cockpit for the pilot.

If there is a famous accident in which the halo has come into action, you should automatically go to the Monaco 2021. In the midst of the battle for the World Cup and after what happened at Silverstone, Max Verstappen ended up on top of Lewis Hamilton’s car after eating the curb of the first chicane, shooting out in a case similar to Hauger’s.

However, there is another precedent if one goes back a little further. In this case the ‘saved’ was charles leclerc. It was in Spa and the Monegasque driver saw fly Fernando Alonso’s McLaren over himl. According to the FIA ​​safety director, after studying the accident he concluded: “From the available data and video images, we are sure that the wheel would not have hit Leclerc’s helmet. But, as Alonso’s car continued to veer towards Leclerc’s, we believe that Alonso’s front endplate would have hit Leclerc’s visor. However, it is difficult to predict the severity of the contact with any precision.”