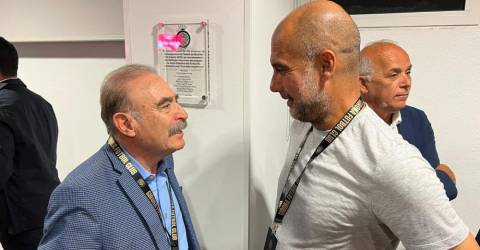 “Two who know about football”, with that label, the president of Bolívar, Marcelo Claure, described the meeting between Guido Loayza, former presi

“Two who know about football”, with that label, the president of Bolívar, Marcelo Claure, described the meeting between Guido Loayza, former president of the Bolivian Football Federation and the Bolívar club, with Manchester City coach Josep Guardiola.

“Great conversation tonight with Guido and Pep remembering the penalty that Pep Guardiola put on Trucco in the 1994 World Cup. An unforgettable night,” Claure highlighted on his social media accounts. Minutes before, the Bolivian businessman, who is co-owner of Girona, stressed that it was a meeting of “two who know football.” Pep attended the match in which Girona beat Getafe 3-1. His team, Manchester City, will face Barcelona tomorrow at the Camp Nou, in a friendly duel.

Claure showed images of the meeting between the former national football manager with one of the best technical directors in the world.

Pep played in the 1994 World Cup in the United States, an event also attended by La Verde, led by Loayza and Xabier Azkargorta. At that time, Guardiola had a very good performance. After the tournament, Diego Armando Maradona confessed that “watching Pep play has been one of the joys of this World Cup”.