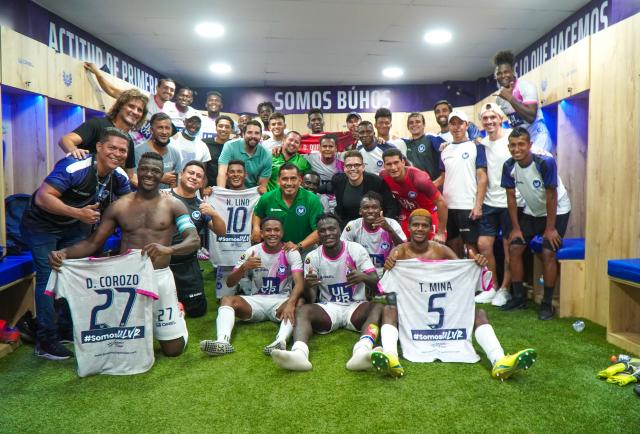 The 2021 season ended for Guayaquil Sport, but in the footballing, administrative and managerial aspects, the Buenos Aires team does not rest in planning the next objectives in which it plans to involve, even more than in this season, to their players with the academic part and include, to the university students they represent, to be part of or to support the club.

What did the VAR review in Piero Hincapié&#8217;s goal against Venezuela?

Alfredo Aguilar, the president of Guayaquil Sport, He went from seeing the bulls from afar to grabbing him by the horns, a situation that led him to realize something unexpected: a promotion to first category in his first year at the helm of the team.

Once the objective was achieved, something very complicated by the way, in Serie B they began to dream big and not only at a sports level but also at an institutional and academic level. The first step was to identify the team with the Vicente Rocafuerte Laica university mascot: the owl.

“The owl is the university&#8217;s mascot. When my grandfather founded it, 55 years ago, he proposed the idea because he was a pioneer in night hours. Inside the house the story was known, but when I got to the project and we were in the second category, I proposed it to my brother, at first he didn&#8217;t like the change, it seemed something radical to him, but in the end he ended up staying, &#8220;he explained.

Los Búhos is the famous logo of the club, in fact they updated the shield and renewed the slogan and other marketing details in the club. But something that he has encouraged and intends to encourage even more for this season, It is the amalgamation between the university and Guayaquil Sport.

“I always like to win and, above all, to grow. Los Búhos is a project that has to take steps forward and one of them is together with the university community. That he interact with the club, that if he cannot be an owl on the pitch, he can be an owl on the field of communication, management, laws and to give a professional contribution to the team. We want to bring the university closer to the team. In 2022 the fans will return to the stadium and we want the support of the students. That they feel that there is a benefit to following us, whether commercial or internal, but that you have that sense of belonging that is the club of our university. We do not pretend that they stop being fans of other teams ”, says Aguilar.

Another differentiating step for this team, and perhaps the most important, is that the president also has left open the possibility for footballers to obtain scholarships with the Laica University And, in fact, three guys on the reservation have taken advantage of it.

Sander Mazamba is one of the figures in the main team and recognizes that the opportunity to grow academically and play, at the same time, is something that has yet to be executed.

Alfaro says that the key to winning was in concentration

“They have offered us scholarships to study at the university and there are kids who take advantage of it. Personally, I was studying business administration for three semesters at another university, but in the last year I have dedicated myself fully to sports. One of my personal goals is to take that opportunity and be able to graduate ”, explains the defender of the Owls.

Mazamba reveals that Aguilar &#8220;has proposed to us to study and that the doors are open for players who are young and require it&#8221;, but he also applauds that &#8220;It also gives space to university students, who are interested in sports, so that they can accompany us on our way from another place.&#8221;

In a country where education for professional footballers is required to be further promoted, The Owls of Guayaquil Sport jump out of the everyday and show that light of hope for those who did not have it in the past.

Alfredo Aguilar, president of Guayaquil Sport, told EXPRESO that when his term ends in the 2023 season, whether he continues or leaves the club, hopes to place the institution in the series of privilege in Ecuadorian soccer.

“We want to put together a team that seeks that promotion that allows us to grow economically and that can strengthen the institutional part. When we get to A we want to compete calmly, looking for an eighth or ninth place. The ascent in our plan is until 2023, when my term ends, so we are on the roadmap, ”Aguilar explained.

Thinking back to 2022, Aguilar revealed that the continuity of the current coach, Rubén Darío Insúa, has not yet been defined, who arrived in the middle of the year to save the team from relegation and succeeded. The Poet came to replace the Chilean Nelson Tapia.

“We are quite happy with the hand of Rubén Darío (Insúa) because he helped us in a problem and managed to prevent us from descending, It was a complex moment in which we were, but we have to be responsible with the economic part ”, adds Aguilar.

It is expected that until December the future of the bench in Guayaquil Sport will be known. The truth is that the Owls are the only representative team of the city in Serie B, after the relegation to the second category of Atlético Porteño.

Tags: Sport, Guayaquil, Soccer
Soccer, a mirror of the corporate world | Fortune
The Intercity football club makes history and rises 40% in its IPO | Markets
They arrested a boxer for assaulting his ex in a club
FOOTBALL 678

Loading...
Newer Post
GP Valencia MotoGP 2021: Rossi earns a happy ending
Older Post
NBA: Pippen continues to hit Jordan: “We won not because of him, but in spite of him”