Guillermo Guevara enters the history of boxing from Albacete 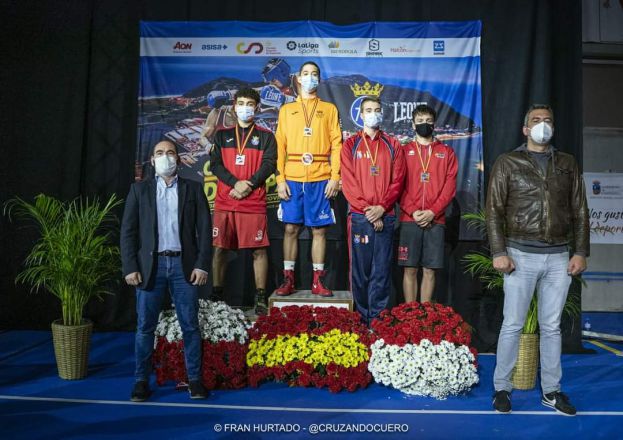 The Fight Club Albacete boxer left Santoña, Cantabria, where the 2021 Spanish Youth and Junior Championships were held, Guille was the only repres

The Fight Club Albacete boxer left Santoña, Cantabria, where the 2021 Spanish Youth and Junior Championships were held, Guille was the only representative of the province of Albacete and represented the Castilla La Mancha team in the youth category -69 Kg.

The Alperino made a sensational tournament, qualifying in the round of 16 and being his rival in the quarterfinals one of the &#8220;coconuts&#8221; of the tournament, Jon Ander Urrutikoetxea, boxer from the Basque country, and a fixture in the national medals, having represented the Spanish team in several tournaments, but Guille came out without complexes, and without the pressure of being the favorite, giving a boxing chair, controlling the distance and preventing Jon from entering with his boleas, which was his power blow, and leaving no doubts to the referees who gave the victory to the points.

Guevara had gotten into the podium, and in the semifinals the boxer from Murcia was waiting for him, current runner-up in Spain, Guille came out to dominate the fight making use of his great wingspan, with straight and very powerful hands, clearly winning the first two rounds in a way quite clear. The third round with both fighters quite tired was a more even round, at the end of the fight both the coach of Castilla La Mancha, Adrián Carrasco, and the boxer believed themselves to be winners, but the referees did not see it that way, opting for decision points divided to the boxer from the region of Murcia, who alighted from the final to the Fight Club Albacete boxer.

Finally, a bronze medal in the Spanish championship, where we highlight that it is the fifth Albacetense in history, to get a national medal, the 5 achieved so far are all from Albacete Fight Club boxers.

In addition, Guille is congratulated by the national coach, the Olympic medalist Rafael Lozano, who has summoned him for next week to represent the Spanish team in the International Boxam tournament, which will take place next week and where he will be able to box with boxers from various national teams.

Loading...
Newer Post
It does not get tired! Felicia Spenser returns to be among the best in the UFC
Older Post
Tebas: “The Super League would destroy football”