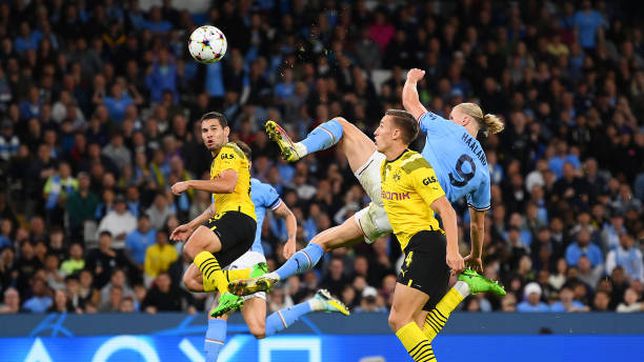 The European echoes of Erling Haaland's great goal continue to resound. Not only did it serve to leave the three points at the Etihad Stadium and

The European echoes of Erling Haaland’s great goal continue to resound. Not only did it serve to leave the three points at the Etihad Stadium and cordon off the second three points for the skyblues, precisely against his team four months ago. The Manchester City striker’s goal against Borussia Dortmund, which recalled the legendary Johan Cruyff against Atlético de Madrid, was recognized by UEFA: it was chosen as the best goal of the week in the Champions League, combine aesthetics and effectiveness.

Even Haaland himself was surprised by the beautiful bill of the goal that gave victory to the ‘citizens’ and through his social networks he boasted about his action. “Kung-Fu soccer”, he posted on his Twitter account.

The acrobatic shot by the Nordic striker, after a pass from the Portuguese Joao Cancelo, with which he gave victory to Pep Guardiola’s team, surpassed Arthur Gomes’s with Sporting against Tottenham, Mislav Orsic’s with Dinamo Zagreb against Milan and John Stones also with City. Another City player, Belgian Kevin de Bruyne, was declared the best footballer of the week ahead of Spaniard Ferrán Jutglá (Bruges), Frenchman Kylian Mbappe (PSG) and young German Jamal Musiala (Bayern Munich).

The players that Gerardo Martino has made his debut in El Tri
Pumas vs. America will dispute the millionaire investment and the pride of Mexican soccer
Valencia could host the 2030 World Cup
FOOTBALL 3741