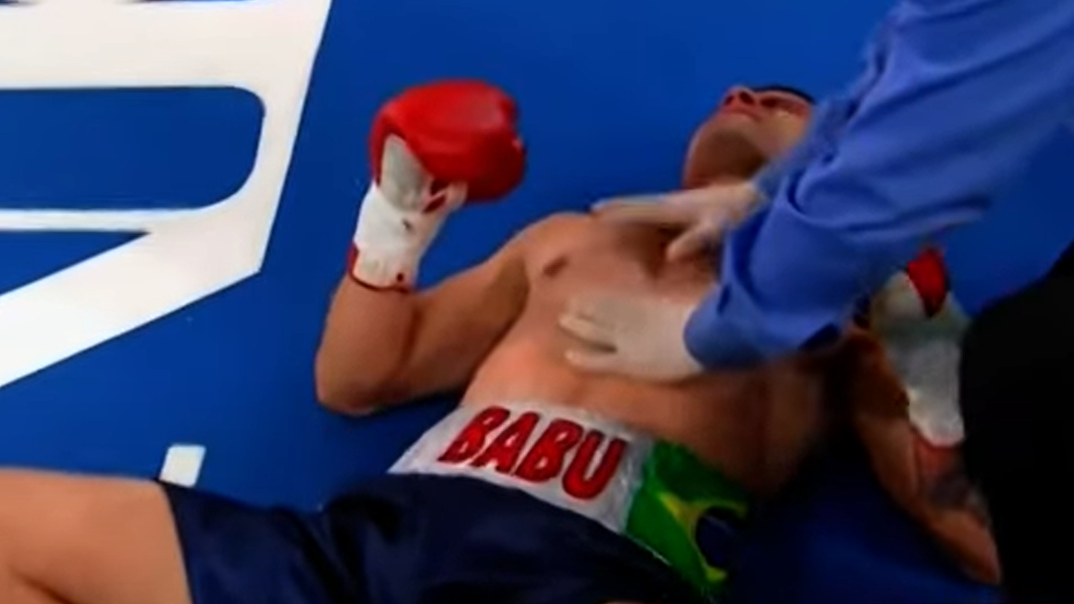 Michel Da Silva with a beard in the ring of the Casino Buenos Aires. They made him go down to shave and fight. In fight he lasted 2m32s against M

Michel Da Silva with a beard in the ring of the Casino Buenos Aires. They made him go down to shave and fight. In fight he lasted 2m32s against Mirco Neck. The story triggers other memories of barber shops, shaves and other cuts.

The Brazilian Michel Da Silva, known as “Bebu”, traveled to Buenos Aires with an almost impressive record: 13 fights, all won, 12 of them before the limit. He had to fight Mirco Cuello, from Santa Fe, undefeated in 8 fights with 7 ahead of schedule, for the vacant South American title in an evening organized by the Argentine Box Federation.

Although during the weigh-in, Leonardo Bianchi, prosecutor of the Argentine Boxing Federation, warned him that he should shave in order to fight, he did not. And so, when he got into the ring, he had to go back to the locker room and shave. He lasted longer throughout that process than the fight, because Mirco Neck knocked him out in less than three minutes.

Behind this story, there is the questioning of some rules of Argentine boxing, since all over the world there are fighters who come up with a beard and nobody forbids it. In the FAB regulations and in practice (sometimes) they must go up shaves.

No one imagines what could have happened if they had come to fight Argentina Marvin Hagler either manny pacquiao, for instance. In the same way that the “half point” ended up annulled after ten years of validity, the Argentine regulation also maintains the questioned by some (we include ourselves) “standing account” or “protection”.

It enables the referee to start the count if any boxer is felt, according to his criteria, even if he has not fallen, something that does not happen in any country in the world.

Of course the fact will bring to mind some interesting cases.

A) Yes, Oscar Natalio “Ringo” Bonavena made his last fight at Luna Park in Buenos Aires wearing a brief mustache. It was when he beat Raúl Reinaldo Gorosito by points in November 1975, at the Luna Park stadium. Not to be out of tune, Gorosito also wore his mustache. Those were the times when the Municipal Boxing Commission exercised control over boxing in the city of Buenos Aires.

The former Argentine lightweight champion and challenger to the WBC world championship, Ricardo Daniel Silva, well known for “Kojak” due to his gleaming baldness, he provides a memory on the subject.

“In September 2001, I had to fight “Rocky” Giménez at the Federation Stadium. A manager – it must have been the prosecutor – invited me to shave a small beard on my chin, although it was insignificant. I did and went up to fight, but I felt that the scissors did not cut everyone equally, since other colleagues of mine, such as Julio Pablo Chacón -who was world champion- or Walter Crücce, on the other hand, could go up with their padlocked beards. I think we should look at deeper issuesbecause here we have the best doctors in the world and they all affirm that a cut on the face is no more dangerous than on the eyebrows or on the scalp, where there is much more hair”.

Silva, who has a record of 68-27-4, 29 KOs and who played the WBC lightweight world championship against Miguel Angel González from Mexico in 1995, says that “It seems incredible, but my wife – with whom we work in the gym training boxers – fought while pregnant with my son because the tests were required every 6 months”. Those were the times when the FAB already fully governed professional boxing, after the closure of Luna Park.

One of the reasons for shaving is due to the issue of possible injuries, although there is also hair on the eyebrows and heads, where, by the way, there are many more cuts than in the places mentioned.

In the case of the Neck-Da Silva fight, the visitor was warned at the weigh-in and when he arrived at the casino, by the prosecutor on duty. But, to everyone’s surprise, when he climbed into the ring and took off the hood that covered his face, he showed off his beard. Result: he had to return to the dressing rooms and was shaved as best he could by several diligent collaborators. The referee was Hernán Guajardo, who warned about the issue almost at the last moment.

What is the responsibility of the referee? According to several referees consulted, “The authority of the referee begins when they are above the ring and the bell rings. An arbitrator controls and even collaborates with the prosecutor on duty on the issue of bandages and clothing, although it is not specifically his function since the one who has the authority is the prosecutor.

The thing is that, broken phones through, no one noticed the detail until “Babu”, pretending to be sneaky, went into the ring with his beard.

“Letting him fight would have been setting a precedent that anyone else can do the same,” stated. And indeed, regulations are made to be followed.

Interestingly in another FAB evening, also held at the Casino Buenos Aires, the American Jarrell Miller entered the ring with a beard to face Ariel Bracamonte. Although the World Boxing Association was involved on that occasion, there was no title at stake in the fight. Someone sarcastically asked: “Who would have dared to send Miller to shave?” alluding to the 155 kilos of the American, who ended up winning by points.

Many remember the thick mustaches of former world champions Víctor Emilio Galíndez or Miguel Ángel Cuello. “Actually, it was for the photos, at least in Argentina, since my brother Víctor always fought squarely in our country.”affirms Roberto Palmero Galíndez, his brother.

Neck, on the other hand, did wear a mustache when he won the vacant WBC world championship over Jesse Burnett (May 21, 1977, TKO 9) but the fight was in Monte Carlo. Nothing strange, since outside of Argentina it is allowed. Let us remember Roberto Durán, Napoles Butter, Alexis Argüello or Carlos Palomino.

Once a rival of Carlos Monzón – one of the many North Americans who came to Buenos Aires to face him before he became world champion – also went through the barber. But his was a mustache and it was just an anecdote without a name or surname floating in the time of the most memorable.

Pedro Rubén Décima, from Tucuman, before fighting Paul Banke for the super bantamweight council world championship, made a presentation to Chilean Pedro Villegas, who lives in Mendoza, on May 18, 1990 in Boulogne, Buenos Aires.

Although his mustache was very slight, a member of the Argentine Boxing Federation was present with the order that, if he did not shave, he could not fight. Those were the times when Juan Carlos Lectoure no longer organized boxing and more than one ill-considered person stated that such a shaving order was intended to complicate things. Finally, Décima shaved, fought and won on points even though he suffered two falls. Shortly after, on November 5 -and already with his mustache grown- he knocked out Paul Banke in Los Angeles, after knocking him down three times and became world champion of the Council.

the same Jorge Fernando “Locomotora” Castro once wore a padlock beard and, although it is difficult to ensure that he fought like this, nobody fails to remember the Cordovan Miguel Angel Aguirre, called “La Cobra”, and also “Tommy” (his most remembered pseudonym). He faced Castro in Merlo, Buenos Aires, for the Confederación Latinoamericana (CLAB) South American cruiserweight title in July 2004. Castro won on points.

This chronicler, who was at the night of Pedro Décima and his close shave, also attended the Castro-Aguirre fight, where despite a title at stake, no one said anything.

Perhaps the problem consists not only in the regulations but also in the fact that, being the Argentine Boxing Federation the organizer of its own festivals, it becomes judge and jury by authorizing the fighters.

We say this because the impressive record of “Babu” Da Silva (33) included a very long inactivity, since August 17, 2018, when Da Silva defeated Carlos Soares Macedo in 6 rounds, who had lost 7 fights one after another before of the limit and that he was left with 7 wins (6 KO) and 14 losses (11 KO). However, Da Silva went up to play the South American championship in the featherweight division. The results were visible. Broken telephones when communicating records with few equivalents or careless beards.

Finally and to put a brief quota of color although it sounds against the grain: in the 50s, an important North American shaving company, put boxing broadcasts on the radio and the screens of the incipient television, in which it was heard the musical slogan that indicated the “Every morning”. Those were the times of the famous “Sports Cavalcade”. In the Buenos Aires casino, as an irony of fate, the famous brand was once again present, since while the Brazilian boxer was being shaved on camera, as an extra show, the brand of the same product was clearly noticed, as a remnant of the past. .

A past that sometimes, in Argentine boxing, refuses to die.