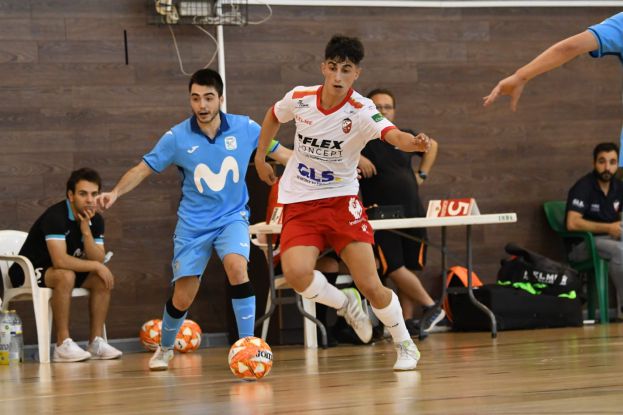 Albacete Futsal begins the season with a tough defeat against Inter Movistar's subsidiary. Defeat by 2-7 of Diego Garrido's men against a young In

Albacete Futsal begins the season with a tough defeat against Inter Movistar’s subsidiary.

Defeat by 2-7 of Diego Garrido’s men against a young Inter Movistar “B” team who made their intentions clear for the new campaign and showed enormous potential.

It was known of the difficulty that the people of Albacete would have in their debut against a recently relegated Second Division and that has young promises of national futsal.

The start was even and both teams would have their options but the visitors made it clear that each arrival of theirs carried a lot of danger on Gonzalo Puebla’s door.

In the blink of an eye, Moñino, the most outstanding player of the match, scored a brace to make it 0-2. Alba wanted to overcome the match and would again have chances to do so. But a new blow in the form of an away goal came over the Lepanto Pavilion.

With the score 0-3, Diego Garrido was betting on the game of five and on the first play, a clear chance came close to making it 1-3 and getting Alba back into the game but the visitors continued with tremendous effectiveness and took advantage a steal of the ball put a complicated 0-4.

Yunii, at the last minute, finally managed to reduce the lead with a tremendous shot from outside. Before the break, Inter would have the option of a new one from the double penalty but the shot went wide.

Spurred on by the first goal, the locker rooms came out convinced of the comeback. The minute Yunii reappeared and made the 2-4 that made the crowded local stands dream.

Adrián Vivar, a few minutes later, crashed the ball into the post that incomprehensibly did not enter the door of international sub 19, Mario.

Despite the local attacks, the Madrid subsidiary proved to be a very good team and endured until in the final stretch and again with a local player goalkeeper, three new goals arrived for the final 2-7.

Albacete Futsal travels next weekend to Bargas, where it will seek to improve its image today and score its first points.