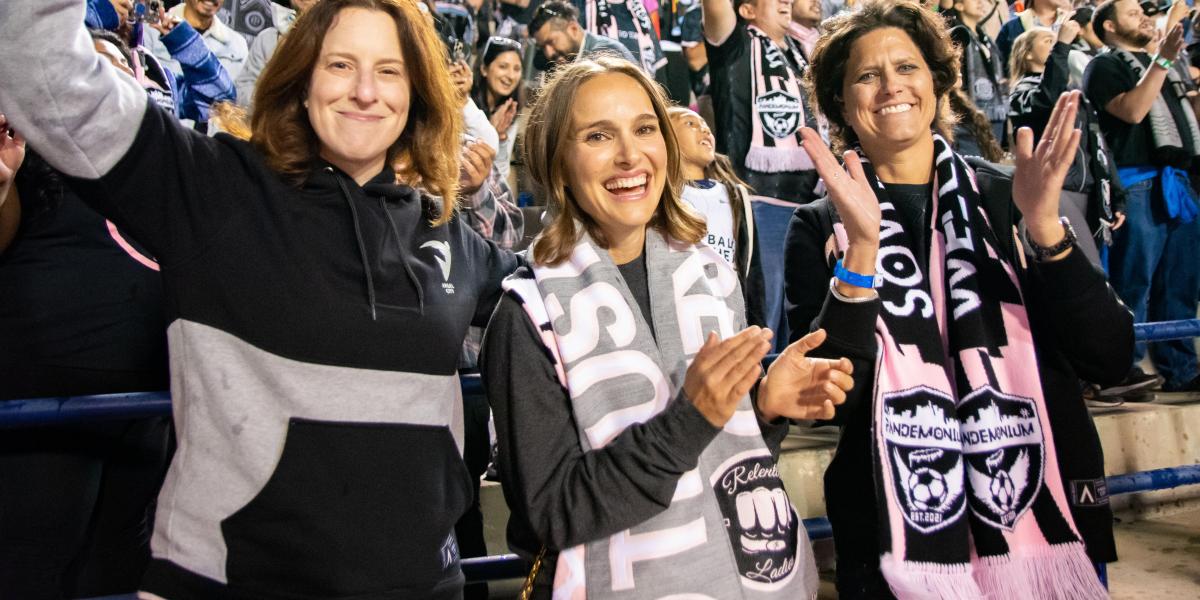 As if it were the premiere of a great Hollywood movie, Angel City FC has started its journey in the National Women’s Soccer League (NWSL) and has made the dream come true Natalie Portmann, who, leading a group of entertainment stars, has brought women’s soccer to Los Angeles.

With a nearly full Banc of California Stadium (22,000 capacity), Angel City enjoyed the ideal debut as they defeated North Carolina Courage 2-1 amidst a splendid and party atmosphere.

“I know it’s only the first match, but this is a moment I will never forget,” the Angel City captain said after the match, Ali Riley.

“No matter what happens this season, no one can take this night away from us and this crowd. To feel that was incredible,” she said, very emotional and on the verge of tears.

vanessa giles with a header and in the 3rd minute he scored Angel City’s first goal (Japanese Jun Endo scored the second just 10 minutes later), but that wasn’t the only historic thing tonight.

In a city that is more and more devoted to soccer (there is the LA Galaxy from Javier ‘Chicharito’ Hernandez and Carlos Vela’s LAFC), Angel City has caused a sensation since the project was announced in July 2020 with a small founding group with Natalie Portman to the head.

“Watching my son idolize female players like Megan Rapinoe and Alex Morgan in the same way as Leo Messi or Karim Benzema I realized that supporting sportswomen could quickly make a cultural change,” the actress told The Guardian in March.

Fans responded enthusiastically as more than 15,000 season tickets were sold before the season began, but it remained to be seen what Angel City’s first day on the Banc of California pitch would look like.

“A new sunrise”. That was the message that was read in the tifo displayed in the north end of the stadium to receive the team coached by Freya Coombe and whose star on the field is the striker Christen Press.

Before the game started, Angel City organized a festival for the fans around the stadium and there was also a “pink carpet” (the color that, together with black, dominates the team’s brand) through which team investors such as Jennifer Garner, Billie Jean King or Becky G.

With a wonderful Californian sunset and the skyscrapers of downtown Los Angeles in the background to complete the postcard from the stadium, the players of the Los Angeles team went out to warm up with huge smiles and crossing a corridor made by some girls even happier than the soccer players.

Additionally, Brittany Howard (of the Alabama Shakes) and Tia P. performed the team’s anthem, “Running with the Angels,” live.

The fans were also able to make their debut with the “three clap” (three claps, in English) that Angel City intends to make their rallying cry before starting their games.

It seems to have had an effect on his debut, as Giles’ early goal sparked a madness in the stands and paved the way for the first victory for a team that wants to make a mark off the pitch as well.

“My teammates were screaming (after the game) and crying with joy, and that was everything for me,” midfielder Dani Weatherholt said.

“So many girls and so many boys from this community admiring us is something truly special (…). I think that this organization is more than a sports team and I think that at that moment it felt that this was something bigger than a game, “he closed. .

Getafe – Majorca, live
Serie A: Arrigo Sacchi: “Inter plays football from the 60s”
“Laporta talks a lot with Xavi and with other football people”
FOOTBALL 2705

Loading...
Newer Post
How much does a super middleweight weigh in boxing? Minimum and…
Older Post
UFC Vegas 55: Santiago Ponzinibbio, in the co-star of UFC Vegas 55 two years after an illness that almost led him to retirement