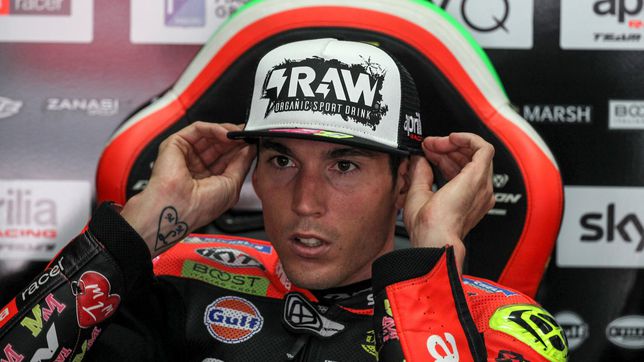 Aleix Espargaró's fourth place at the start of the German GP served to check the state of his mood, because the first question that AS asked him wa

Aleix Espargaró’s fourth place at the start of the German GP served to check the state of his mood, because the first question that AS asked him was as a joke, telling him that if the balloon was beginning to deflate by not finishing between the first three. He accepted the joke as such, smiled and made it clear that he has come to Germany to win.

“I was angry because I have done three laps in 20.2, which is a very fast time and that means that I have done something wrong, because I should have done one in 19.8. That annoyed me a bit since I was slow in the first set, which is where I have to improve; in the three and in the four I have been fast, but with the race tire I have been very, very fast and the pace has been very good, more than I expected”, he analyzed about his first day, and emphasized his pace : “I have better rhythm than my rivals. More than I expected, but it makes me happy, although I don’t like fourth place, since being happy with fourth means that fourth is good”.

Another question with prank mode on: Has your family asked you to fail more often since that’s how you take them on trips to Disneyland? His response: “No, no, if the reality is that I spend a lot of time with them. It was more of a thing of mine and it went very well for me since I disconnected a lot. I spend a lot of time with them, but I think it was a bit like getting out of the routine and I’ve always said that my routine freaks me out. I don’t go out with friends, I don’t go out to parties, I just ride my bike and spend the afternoons at home with my children and I love this routine, but after Barcelona I had the feeling that I needed to do something different”.

When commenting to him that in AS we had rescued two other historical blunders in MotoGP and asking him to place them as if it were a podium, he released: “I can’t wait to win on Sunday so that you stop giving me the trouble about the blunder… ”. And once he got down to business, he put his mistake ahead of everyone else: “It’s not Sete’s fault that he ran out of gas. Mine is the first on the podium, because it is my fault one hundred percent. The other two I think it’s not his fault, it’s the team’s fault. The gasoline one, if it didn’t leave with a full tank, is something ‘heavy’”. It is said that it was an error in the electronics, and he adds: “Now the bikes are calculating, now I could run out of gas if I was too dumb in a race where I was at the limit, because the bike is calculating you and you can go playing with the maps. She recalculates every two laps if I’m not mistaken. A light comes on and he tells you that you haven’t reached the end of the race and this year the engine is mega-efficient and I don’t think I’ve started full in any race. Other years the bike gives you a yellow light and tells you to go to map two, because you don’t reach the end of the race. You go to map two and start to cut a little bit and don’t go up laps and after a couple of laps the light goes out and you can go back to map one, but of course, if you don’t change the map and continue to the top, you would not arrive”.

A question about the market, if he already knew who the riders of the Aprilia satellite team are. Answer: “On Thursday I asked Massimo (Rivola) and he asked me what my opinion of Oliveira was, what I thought, I told him: “But Gresini is not announcing it now”. He told me no: “I don’t know what it is about Gresini, but I can tell you that we are negotiating with Oliveira.” The Portuguese is in negotiations with four factories, all possible except Yamaha.

And when asked if there would be any problem with the four Aprilia riders being Spanish, he said: “No. One of the riders he likes the most, the one he likes the most, is Spanish and young, and the others would also have the option of being Spanish, so no, I don’t think Rivola has thought of that”. He did not want to give the name, but was reminded that not long ago Aleix seemed to be the representative of Raúl Fernández, to which he laughed: “No, no! He seems like a good driver to me because of what he did last year. I don’t like the Moto2 category at all. That category is very difficult and what he did last year is very ‘heavy’. He made 300 points. It’s very heavy, very heavy.”

MotoGP | Mir: “This time I won’t have to overtake so many to win”
The last ten MotoGP world champions and most successful riders
Mir is not surprised that there is talk of Acosta for MotoGP
MOTOGP 640