Ime Udoka, from missing Estudiantes to resurrecting the Celtics 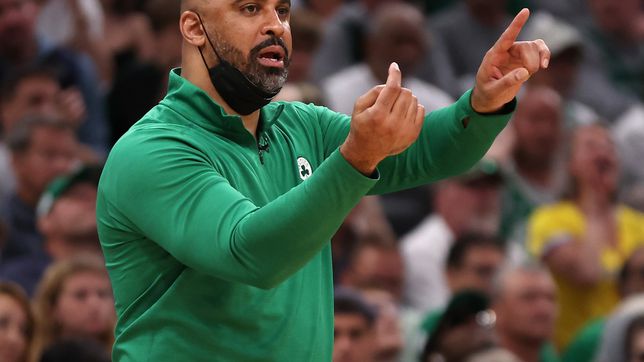 The Celtics are back. Back to the Garden, to the Finals, to the playoffs, to the elite, to the fight for the ring. To the titanic, extraordinary,

The Celtics are back. Back to the Garden, to the Finals, to the playoffs, to the elite, to the fight for the ring. To the titanic, extraordinary, enormous battle. To the place they’ve always been, to the war they’ve always fought. On the way to the ring and to freedom, to the greatest throne in the NBA, one that they have tirelessly occupied since the dawn of a competition in which they are the original team, up to 17 times, but only once since 1986. Too long a wait that an entity of such caliber cannot afford. That is why the merit is so great and the definitive series is the final exam of a season in which, no matter what happens, they will end up with outstanding. For historic defense, incredible comeback, miraculous recovery and resurrection of a once indomitable but recently forgotten pride.

And that everything seemed lost. Not early in the season, or in early January, when an 18-21 record kept them out of the playoffs and even the play-in. Then a 9-fight win streak between January 29 and February 15 changed things. And, from there, to fly: the best defense in the NBA, one of the best attacks, a combined, homogeneous group, capable of overcoming any rival or any obstacle and flying to be the best team in 2022 (as a calendar year). ), reach 50 wins (51-31 at the end) and second place in the Eastern Conference before sweeping the Nets and beating, in an exercise of survival and resilience, the Bucks and the Heat in seven tough games by Serie. The return of the Celtics.

But a few months before all that, things already seemed lost: it became obvious that Brad Stevens was unable to contain the untidy chemistry of the locker room, dismantled by Kyrie and totally sunk in the Orlando bubble, and said goodbye to the bench after a disastrous season in which, with play-in through, they fell to the Nets in the first round unappealable (4-1). But he did not return to the University of Indiana, but instead seized the power of the offices, from which an excessively conservative Danny Ainge emerged, inbred to himself, entrenched in the past. The problem was structural. And the position of coach ended up being occupied by Ime Udoka, a neophyte in the main position, a man with no experience in roles of these magnitudes. And, ultimately, the maker of the Celtics’ resurrection.

The power of Udoka: Murcia, Popovich…

Udoka is quite a nomad. He was born in Nigeria on August 9, 1977, and at 44 he is one of the youngest coaches in the competition, although not as young as his predecessor, Stevens, who landed in the best league in the world at just 37. And he moved to the United States, where he developed without much conviction a discreet career in which he went through several teams and never exceeded 10 points per game. In 2012, he played for Murcia, in the Endesa League, where he became known to the Spanish fans. That course, the Murcians certified on the last day the painful decline of Estudiantes, who said goodbye to the queen category.

That was probably Udoka’s worst moment as a professional. The desolation and cries of the blue fans turned to indignation when Udoka walked the field with his thumbs down and shouting “down, down”. The late Pedro Alarcón, head of the club’s security for 15 years, recriminated and tried to stop him. It was impossible. The American painted one of the ugliest actions in basketball: humiliating the fallen rival when the ball has stopped bouncing. The relegation was even sadder as it coincided with the farewell of a legend like Carlos Jiménez, who returned to Estudiantes that same summer after passing through Unicaja.

Udoka has put that behind him. He was an assistant to Gregg Popovich in the 2013 and 2014 Finals, then spent time as an assistant with the Sixers and Nets before landing his first head-coaching job with the Celtics. Student fans still angrily remember what happened then. But Udoka, oblivious to all that, has resurrected the green pride with good defensive concepts, great rotations, exceptional exits from timeouts, good response to losses and great communication with his players. He has consolidated Tatum as a star, Robert Williams as an elite defender, Smart as a point guard and Horford as the hallmark of a team that smells like a champion. And everything, with a future ahead that does not seem to have a ceiling. He is Ime Udoka, the miracle worker.

NBA: The great mystery of the NBA: What would Cleveland have been without so many injuries?
Ime Udoka, first Celtics coach to reach the Finals during his debut year
NBA: Minnesota surprises Memphis
NBA 2847