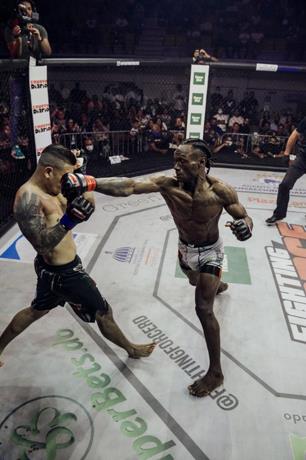 Dominican Reynaldo ‘Tiki’ Acevedo, a professional mixed martial arts (MMA) fighter, will fight for the world lightweight title (155 lbs.) of Titán FC, this coming April 10 at the Fencing Pavilion of the Olympic Center. The information was confirmed by Rodolfo Dauhajre, president of the national promoter Fighting Force.

“Our warrior Tiki Acevedo will be fighting for the 155 lbs world title, raising the flag and making sure that this belt stays in the country,” said Rodolfo Dauhajre.

Acevedo, with a professional record of 9 wins and only 3 losses, will face North American Landon Quiñones in a 5-round MMA fight for the world title. Quiñones has a record of 5 wins, 1 loss and 1 draw, and resides in Miami, Florida, USA.

The fight will be the main event of the international fight card “Titán FC 75” in association with “Fighting Force 8”, promoted by both organizations and with global transmission by the exclusive platform of UFC Fight Pass, television medium of the Ultimate Fighting Championship (UFC ).

Acevedo, who is the first challenger in the Fighting Force rankings and is a member of the Bujutsu International academy in Puerto Plata, is coming off a second-round TKO victory against Nicaraguan Benjamín Jirón Molina at Fighting Force 7. , last November 27.

The card will include more than 10 international MMA bouts, including the co-main event between Carlos ‘Matador’ Matos (8-1) and Elias ‘La Mole’ Santos (4-4) for the Fighting Force 170-pound title. . The event is scheduled to start at 4 pm in the Fencing Pavilion of the Olympic Center, and tickets will be on sale at Uepa Tickets.